I love roasted potatoes because they are delicious and simple to prepare, even if they are a little cooking time intensive. I guess that just proves the old adage, that you can't have everything.

Be that as it may, I decided this evening that I would finally utilize the potatoes that I had picked up at my favorite store last week. (Yeah, you guessed it... Trader Joe's) Normally I would have just called them "baby" potatoes, but I noticed the tag this evening and had to laugh... Evidently there is a new size... ;) 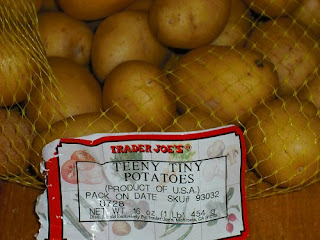 This really isn't a recipe per se. I know, I do that alot, but it really is more about your own personal taste. I tend to roast potatoes in several ways, letting the particular oil I am using be my guide to seasoning. This evening I was gripped by the incurable "need" to use Toasted Sesame oil instead of Olive, Walnut, Macadamia Nut or Apricot kernel oils. 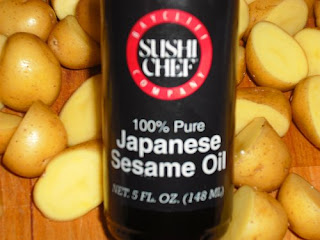 As the thought process continued, I moved from Toasty Sesame oil to Smokey Salt (Salish - Adler Smoked, although I think an Apple Wood smoked would have been even better), 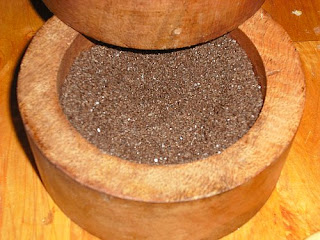 This led to the use of Green Peppercorns so I would not over power the light smokey toastiness that I already had going on. Just to add a subtle heat. 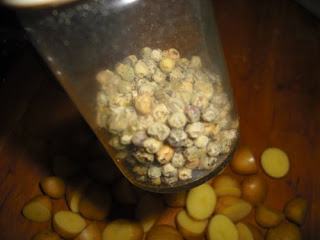 I was going to keep it simple at this point, but as luck would have it, I had some ground green pepper on my finger, being a 'Pepper Freak', I quickly stuck my finger in my mouth (I know it's REALLY bad form, but we all do it at one time or another). I was greeted with a mild heat followed by something I had forgotten about, an "almost but not quite" cloviness...
That was when I decided my potatoes needed some cinnamon. 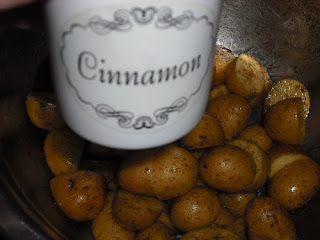 Not exactly a conventional ingredient for roasted potatoes, but hey, I like to mix it up every once in awhile. If cooking Greek & Morrocan food has taught me anything, it's that Cinnamon is ideal in both sweet AND savory dishes... 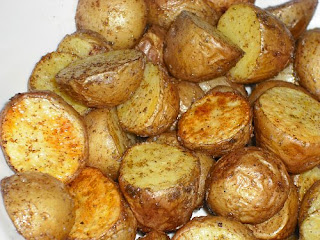 Preaheat oven to 425 degrees
Simply, cut the potatoes in half to expidite cooking. 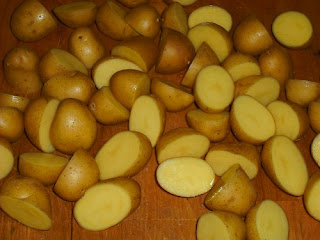 Place in a bowl and toss with just enough sesame oil to coat. 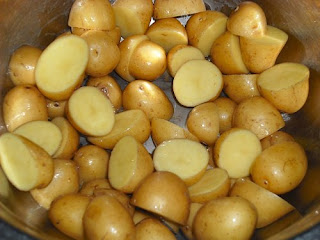 While tossing the bowl gently, sprinkle with Fresh Ground Green Pepper. (I often Pepper food, before I salt it - It's just a weird thing I do) 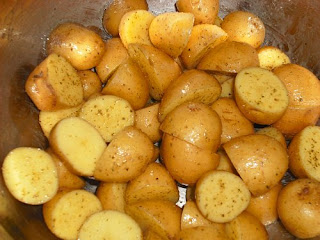 Continue tossing and sprinkle with Smoked Salt (of your choice). 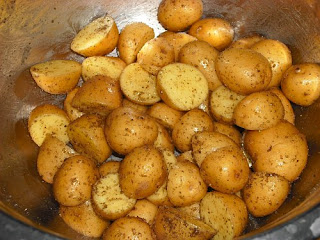 And continue tossing while sprinkling lightly with Cinnamon.
Spread out on a foil lined baking sheet. 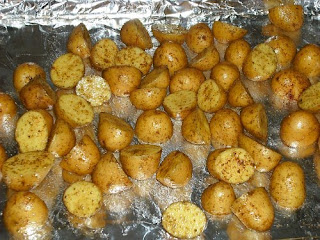 Bake for 20-25 minutes or until a fork can pierce with only slight resistance. 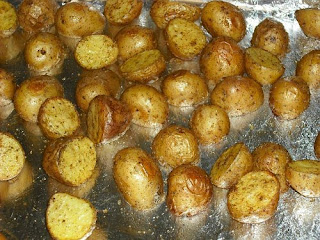 On the whole, very delicious, although I think they would have benefitted from some sesame seeds being tossed in as well... :) I will have to remember that for the next time.

Oh, your "teeny tiny" potatoes sound delicious! Cinnamon is probably something I would have never added...but it sounds oddly good, I may have to be adventurous on my next tater go-round!

You crack me up! I don't think anything you do is ever simple. Always different, unique and cool! lol So were these tiny potatoes really smaller than baby potatoes?

I really think you may have missed your calling in life, you would be a great chef, and if that doesn't sound like something you would like to do, I think you would be a great writer. I would be first in line to buy a book about your cooking adventures. These sound very interesting. Funny, I kept waiting for you to add some sesame seeds, I bet that would have been good.

Nice. Roasted potatoes are one of natures perfect foods. Love the cinnamon in there, I'm going to have to try that.

yum yum yum! love potatoes....especially the teeny tiny ones! and roasted..ya baby!! Never would've thought to add cinnamon. wow! the things your mind comes up with!

Girlichef - Thank you :) They were quite tasty.

Michele - Thank you - These were REALLY little, like maybe an inch across.

Patti - Thanks, I have toyed with both ideas. Blogging fulfills my need to write... at least right now. And yes, sesame seeds are a must, I think. Hunger made me space it off last night, they were half cooked when I realized.

Bob - I concur, perfect.. Especially with rosemary, black pepper and grey salt YUM! (that is still my fav)

Danielle - ;) Sometimes that is a scary thing... Bakla-misu comes to mind.. Trust me, you don't want to know...

Those sound so good!!!