I have been wanting to write something about molded cookies for about 2 years, but I have never really been sure how to tackle the subject, for it is a formidable one.  The internet already contains a large body of information on the subject if you know what to look for; being "Springerle", "Kvircedli", "Speculaas" (Speculoos or Spekulatius), "Molded Gingerbread" (Lebkuchen), "Pryaniki", "Honey Cakes", "Sable Breton", "Albertle", "Pizzelle", "Sandbakkelse", "Ka’ik", "Shortbread", "Moon Cakes", "Krumkake", "Katzenpratzl", "Piernik", "Kolompeh", "Frankfurter Brenten", "Ma'moul", "Paprenjak", "Stroopwafle", and "Oreshki" to name just a few.  They hail from Scotland, Norway, Poland, Hungary, Germany, Lebanon, Denmark, Switzerland, Russia, Czech Republic, Iran, Sweden, Croatia, Italy, The Netherlands, Egypt, Belgium, Iran, and China.   Molded cookies are, in truth, a cross cultural phenomenon.

Though the popularity of simple cut-out cookies has overshadowed molded cookies over the last century, there are still small pockets of devout cookie molders out there, across the globe.  It often takes a bit more time, due to aging of dough, or drying the cookies over night, or even multiple chilling sessions in the refrigerator between mixing, rolling, pressing and cutting; even before you get to baking.  In the end, they are not only delicious, but exquisitely beautiful to behold and well worth the effort involved.  In my humble opinion, that is.

There are many ways to mold cookies, and many different types of molds to mold said cookies.  One group that I would like to skim over really quick, for I will not be covering it at this time, is the iron molded cookies; of which, I have previously written about the Stroopwafle from The Netherlands and Pizzelle from Italy many moons ago during the Waffle series I began back in early 2009.  They are all related to the waffle and are thus baked in different forms of waffle irons.  It could even be said that they do not really qualify as cookies, but are actually thin crispy waffles instead.  They consist of the Krumkake from Norway, Stroopwafles from The Netherlands, Oreshki from Russia, Gaulettes & Lukken from Belgium and Pizzelle of Italy.  All are light thin batters baked between iron plates.  Swedish Rosette cookies which, while not baked IN an iron, are fried ON an Iron form, may also be included in this group. 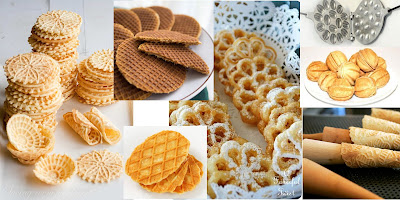 The molded cookies I would like to examine in a little more depth over the next several posts are those that are formed by either  "pressing" the dough into mold or "stamping" the dough with the mold.  Speculaas, Honey Cakes and Gingerbread are usually formed by pressing the dough into a mold and then whacking the mold on the counter over baking parchment or foil, before being moved to a baking sheet.  Springerle, Frankfurter Brenten, and Albertle are formed by "stamping" the dough with a device that leaves an impression after it has been rolled to a specific thickness.  Stamping can also be done via a carved rolling pin.

Pressed cookies (Speculaas, Honey Cakes, Pryanik)
These "cavity" molds are still primarily made of wood, though there are resin copies as well as ceramic molds (which are usually intended for baking shortbread).  They are designed slightly different than other cookie molds in that they have either sloping or vertical sides that form an actual cavity which dictated the shape of the cookie and then carving within the cavity of the mold that adds raised retails to the cookie shape.  Most people are at least somewhat familiar with the Dutch Windmill cookies, though machine made versions in the U.S. tend to be just almond flavored instead of having any actual speculaaskruiden (speculaas spice mix) flavor.   Having covered the basics of Speculaas back in 2013, I will save these types of molds for later; even though my technique and ingredient list has changed a bit over the last 6 years. 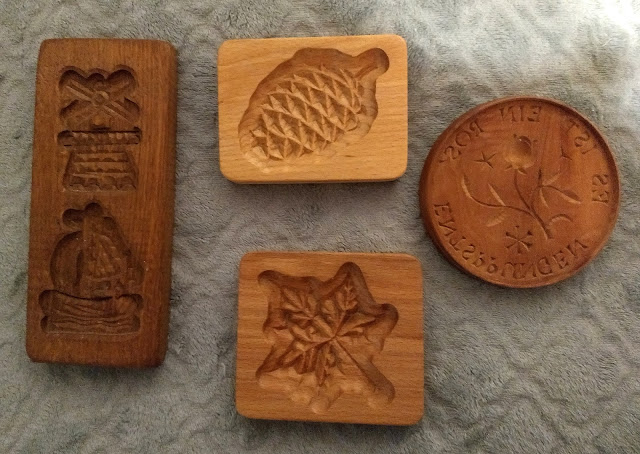 Stamped cookies (Springerle, Albertle, Frankfurter Brenten, etc.)
The molds to make these cookies were originally carved out of wood but are also made of ceramic, metal, silicon and food safe resins as well.  The method of using these types of stamps varies as much as the types of dough used.

The first method, I call the "Springerle" method, but it is also used for Albertle, Frankfurter Brenton and some Shortbread.  The dough is rolled to a specific thickness, then the design is "stamped" into the dough and the individual cookie is cut out.  This continues, 1 cookie at a time, until all the dough from a single rolling is used up.  In some cases, a carved rolling pin is rolled across the dough or a large multi-image plate is pressing into the dough, resulting in multiple cookies that must be cut apart with either small cutters or the use of a pastry wheel or pizza cutter.

The second method is more popular for Danish Butter Cookies, modified versions of Sugar Cookies or Peanut Butter cookies as well as, again, Shortbread (very versatile cookie that shortbread).  A ball of dough is placed on a baking sheet and the ball is stamped with the mold (sometimes the edges are cleaned up with a cutter, but not always) or the dough is rolled out and cut into shapes that are then stamped with a design. This method seems to be more of a Scandinavian approach to cookie making though the Sable Breton of France sort of falls under this method as well.

I would really like to focus on actual Springerle/Stamp style molds, and in doing so, I would like to first talk about the multi-image rolling pins.  Even though I do not own one, I think a few things need to be cleared up, considering what I have seen when searching on eBay.

This is a Springerle rolling pin made of carved wood....  These were the the only thing available for purchase in the United States, for a very long time. 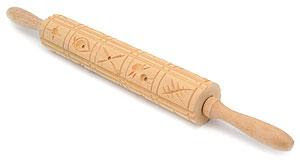 Fairly recently, some ingenious people have begun producing laser cut rolling pins.  Though the designs tend to be square edged and flat topped, there are some beautiful designs out there and they are a lot of fun to play with. 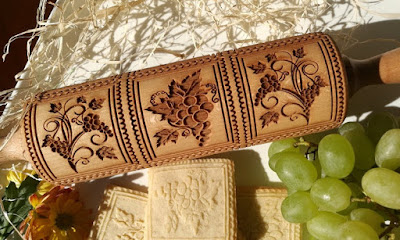 This is also a Springerle rolling pin, though it is a resin copy of an antique mold.  I believe this example is a House on the Hill rolling pin. 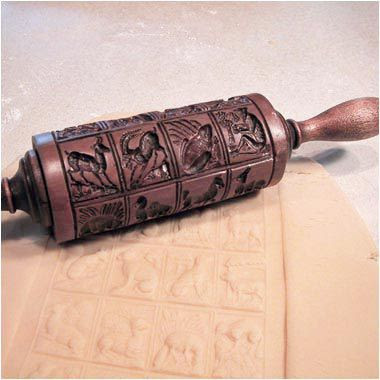 This, however, is NOT a Springerle rolling pin... It is for Lefse, a Scandinavian potato based flat bread.  This is sometimes referred to as a "corrugated" rolling pin. 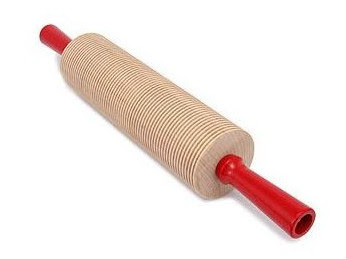 This is also NOT a Springerle rolling pin...  It is for Lefse as well, and is known as the "square cut" rolling pin. 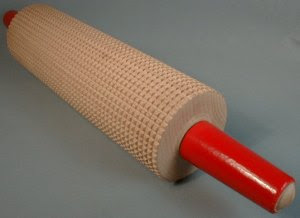 This is also NOT a Springerle rolling pin....  It is for Knækbrød, a Rye based crispbread from Scandinavia. (and The Netherlands and Germany under similar names)

This is also NOT a Springerle rolling pin.... It is, in fact, for making Ravioli. (I think pretty much everyone is familiar with ravioli, even if only from a can of Chef Boyardee) 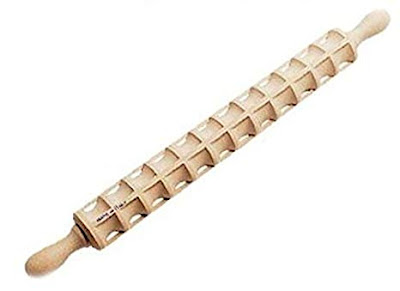 Now that the rolling pin eBay listing fiascos have been cleared up, lets talk about Springerle molds and Cookie stamps.  I group them together because for all intents and purposes, they are really the same thing.  The execution and design of the carving may vary, but the concept behind them is identical... Imprinting/Embossing a design in cookie dough.

Wooden molds have been around for centuries, as in the 1400s.  The quality of carving can vary greatly from the very simple, to unbelievably intricate.   I have a few wooden molds and they are from all over (USA, Germany, Hungary, Russia) and have different styles of carving.  Most of my collection, however, is made of food safe resin copies of older molds.  What I would call actual "Springerle" molds leave an embossed or raised design. 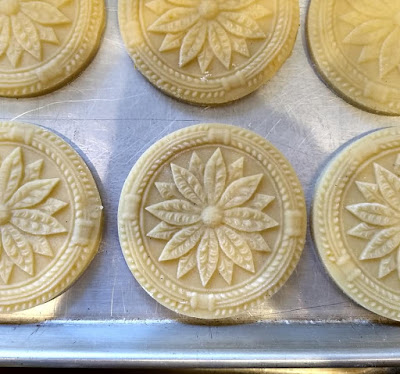 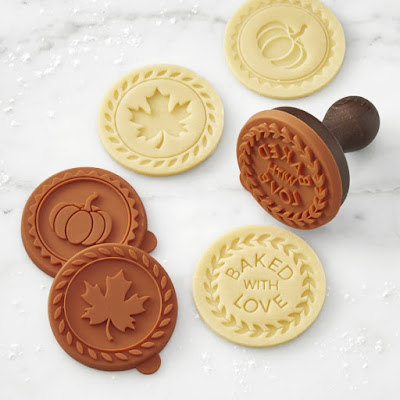 That being said, the Rycraft makes and sells what they have labeled themselves as "cookies stamps", however, their beautiful terracotta stamps leave an embossed design like a Springerle mold would.

Which only proves that what constitutes a Springerle mold is really in the eye of the beholder.

In conclusion, I would like to leave you with a list of resources for molds.  These links are current as of July 2019 and I will not be updating this page again, once it is published so if in the future (some  5-10 years from now) some of these links no longer work, I apologize; but that's just the way the proverbial cookie crumbles.

Anis Paradies in Switzerland (cause you can order directly from them) - Resin copies of antique molds as well as some new molds by very talented carvers.

Gingerhaus -  Purveyor of both House on the Hill and Anis Paradies molds as well as Nordic Ware and other baking supplies.

The Springerle Baker -  Baker of springerle and creator of spectacular resin copies of antique molds.

Fancy Flours  - Purveyor of House on the Hill molds and cutters.

Fantes - Purveyor of both House on the Hill molds and German wood rolling pins.


In the next post, I will be making traditional springerle cookie dough. (and attempting an actual video - we'll see how it goes).