Gadgets We Take For Granite - Seasoning a Granite Mortar & Pestle

I won't lie, I am totally addicted to a new show after only 1 episode...  Revolution.

For those who did not seen the premier on Monday, the show is based on the premise that all electricity goes out and doesn't come back on.  At first that doesn't seem like such a big deal.  After all, there are black outs and brown outs and various other interruptions in the grid every now and then.  Heck, I spent most of the winters of my childhood without power due to the east wind and ice storms.  Sure, no TV or lights seems pretty prosaic, just grab a portable radio and a flashlight, right?  Nope, when I say "all the electricity" goes out, I mean ALL the electricity goes out.  This means no batteries and no generators....  And it isn't ever going to come back on.

Imagine....  No wrist watches, no beard trimmers, no computers, and no cell phones.  Heck, no regular phones or telegraphs either, since they run on low voltage current.  (kind of like Gilligan's Island)

If you are in the country and on well water, your pump is not working....  I don't think there are any city municipal water systems that rely solely on gravity, so city dwellers have no water.

Now, this is not totally fatalistic.  It's also part of the reason that I am addicted to the show already, for I am curious to see where they are going to take the story line.  It's set 15 years after the "power goes out" and yet, no one seems to have figured out how to re-harness steam power. Where are the Steam-Punks when you need em?

The industrial revolution started on steam power.  Electricity is not necessary to creating steam, just a lot of greenhouse gas causing coal and wood.  But, even steam produced by coal, could be an issue since it will now have to be mined by hand.  But, as I said, I am curious about WHY this was not brought up in the very first episode. (I am also puzzled by the fact that the "bad guys" have resorted to black powder rifles.... You don't need electricity to refill empty bullet casings... I'm just sayin)

Anyway, this started me thinking about how many kitchen gadgets we take for granted?  I'm not even talking about the major appliances like Dishwashers, Refrigerators, Hot Water Heaters, Stoves and Ovens.  What about all the small appliances?  How many of these conveniences do you have in your kitchen....?  Stand Mixer, Hand Held Mixer, Food Processor, Blender, Deep Fryer, George Foreman Grill, Waffle Iron, Electric Griddle, Bread Machine, Salad Shooter, Submersion Blender, Coffee Maker, Coffee Grinder, Toaster, Inside the Egg Shell Egg Scrambler?

I know I would weep bitterly over the loss of Kitchen Aid and my Blender.  Though I guess without a freezer there wouldn't be much ice for me to make margaritas.  Hmmmm. Well, I guess I would only miss my Kitchen Aid Mixer.  :(   Luckily, one of my favorite kitchen "appliances", that I could never live without, is not electric.  My Granite Mortar & Pestle.

I met my first Granite Mortar & Pestle via Jamie Oliver back in the late 90's during his Naked Chef days....  Mine is 8 inches across, 5 1/2 inches high, holds 3 cups and weighs a whopping 16 pounds.  I think Jamie's was even bigger.  (No, I do not have Mortar and Pestle envy, 8 inches gets the job done)  ;)
It is truly an indispensable part of my kitchen.  It crushes, it grinds, it mashes, it smashes, it blends, it purees, and it mixes.  In fact, the only thing it doesn't do, is make Julienne Fries. 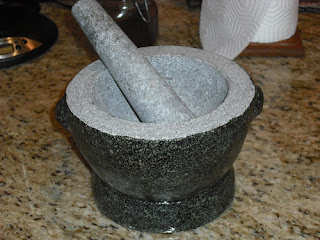 But best of all, in the event of a break in, I can always use it as a weapon.  I have a loaded mortar and pestle and I am not afraid to use it.  Bring it!

All kidding aside, I don't think any kitchen should be without one.  Though I must admit that I am a little bias. I am sort of a Mortar and Pestle freak.  All shapes, sizes and materials; from wood, ceramic and brass to marble, cast iron and lava rock.  There is a mortar and pestle designed for every job. (I usually use the granite for curry pastes) But if you only have one... Go with the granite.  It's non-porous and doesn't absorb odors like other materials can.  Granted, oil will be absorbed on some level and it WILL develop a patina over time.

So if you purchase a Granite Mortar & Pestle, you will need to season it before first use, just like you would a Molcajete, though it's not nearly as involved.   Granite, being much tougher than lava rock, is not nearly as prone to graveling and sanding your food. So first, wash the Mortar and Pestle in warm water with a stiff brush, and allow it to air dry. 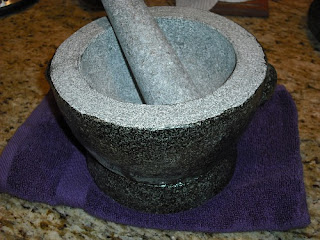 It will take about 3-6 hours (it's not nearly as porous as a Molcajete). Incidentally, I always place a towel under my Mortar and Pestle, it's heavy and rough on the bottom (it was hand carved), so I am protecting the finish on the granite counter.

Meanwhile, you can assemble your ingredients.

OK, Just like the Molcajete, you are going to place 1/4 cup of Jasmine Rice in the Mortar..... then crush and grind it into rice flour, or at least rice meal. 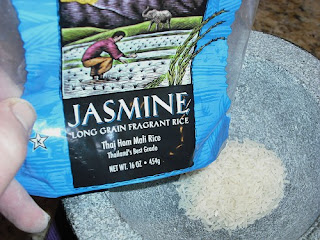 The first 1/4 cup will turn grey with dust left over from carving; go ahead and dump it in the garbage. 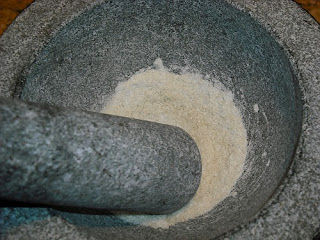 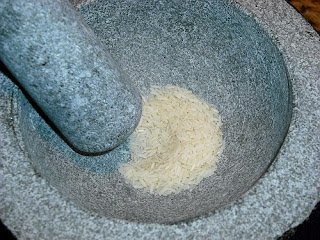 You will notice that the rice remains white after grinding the last 1/4 cup. 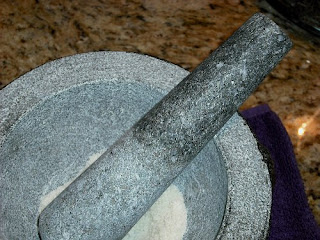 Now the fun part.....
Toss in the Lemongrass, Coriander, Cumin, Salt and Garlic. 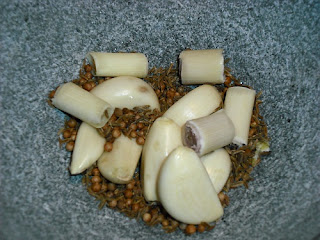 Crush this into a paste and leave it to sit in the mortar for 12 hours....  mmmmm The Scent of Thai food! 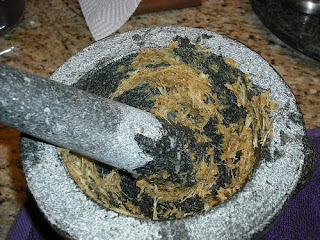 Remove the paste, rinse with warm water and allow it to dry. 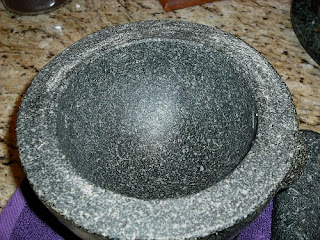 Even though Granite is not very porous, it will still hold onto soap flavors; so, just like cast iron, use only Hot water and a brush... NO SOAP.

And there you go, nice and clean with a lovely seasoning... 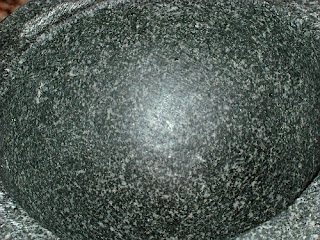 Now, it the power ever decides to "go out and not come back on" you are totally ready.  Now if I could just figure out how to rig my Kitchen Aid to run on steam power.......

I am right with you on loving my KitchenAid mixer. This is great information on how to prepare a new Mortar and Pestle. I had tried a molcajete and didn't like it at all. I ended up taking it back. But I really need something to do all the great things this could do. I am going to be on the lookout for a great mortar and pestle since you have renewed my interest. I really wanted to see that show, but my husband always tells me there is nothing on, and then turns the tv to sports. Grrr...

Just out of curiousity, did you crush the rice on the side walls of the mortar to also remove the dust residue in that area?

kauai4ever - Yes, at least as much as possible.

granite mortar and pestle
Love my mortal and pestle. Use it more than I thought I would.it is very important for home..
i really like it...

So how often do you season it?

Mike - You should only have to season it the one time... Unless you wash it with soap and water, then you will have to grind rice in it again to remove the soap residue and re-season it with a paste.

I really love thai food and have been excited to try cooking some myself. I would like to make the food as authentic as I can. I think a good way to do this is to get a mortar and pestle. I will be sure to season it like this. Thanks for sharing! http://tastepadthai.com/moandpela.html

Hi. I just came home with a new granite mortar and pestle. I am so happy to come across this blog. I am going to try your way of prepping it. Have a couple of questions. Does it have to be jasmine rice, or any rice is fine? Also, I am always worried about using it over my granite counter for fear I will crack it. Is it okay to pound right over the counter? Thanks so much.

How amendable to change are the spices used in the seasoning paste?

I was thinking of grinding a few cardamom pods as well, any problem with this? Will it funk up the chemistry?

Late to the party, got my first mortar and pestle and looking forward to playing with it. Thanks for the advice.

It is worth noting that a Margarita blender can be rigged very nicely to the back of a bicycle and run by pedal power. I have two friends who have done this, and while the ice is perhaps not chopped as uniformly, the margarita tastes even better after you've worked hard for it. All is not lost!

What if you were planning on using it to grind all kinds of spices from cumin to cinnamon to cloves? Would you still want to season it with garlic? What exactly is the seasoning process for? Maintenance or flavor?

can you use something other than lemongrass? I have everything else....

Mason... If you are not going to be making curry paste and use it primarily for dry spice grinding, then I would skip that step. I seasoned this one specifically because it will be used for wet ingredients like Curries, Pestos and such.

Michael... The lemongrass is not a necessity, you just need some "wet" spices to grind up in it. Lemongrass is a personal preference, because I love the smell, when combined with garlic. A little Galangal would be fine as well.

You can always attach a system of gears and a belt and run it from your bicycle. Recipes would have to be adjusted "Pedal at high speed for 10 minutes."