OK, "technically" this is not a Thai dish.  Well, it is, but it isn't.  Coconut rice, in Thailand, is usually sweetened and served as a dessert.  This is really Malaysia's national dish; incorporating Jasmine Rice (a native of Thailand) cooked in Coconut Milk with Cinnamon, Lemongrass, Coriander seed and Pandan; baring a strong resemblance to Nasi Uduk from Indonesia.

I think it would be safe to state that everyone reading this knows what Jasmine Rice is, as well as Coconut Milk, Cinnamon and Coriander.  You probably have them in your pantry right now.  And while Lemongrass is more than likely not a staple of the western culinary pantry, it's usually available in the mega-marts.  But I can hear a lot of people out there scratching their heads and saying, "What the heck is Pandan?"

Pandan is a leaf, or rather a frond, harvested from a palm like plant in southern Asia.  It's used in Asian cuisine in the same way we Westerners use Vanilla... Pretty much in just about everything and especially in desserts. It doesn't taste like vanilla though.  To me, it more or less tastes the way Jasmine Rice smells, with a little verdant grass and toasted nuttiness thrown in for good measure.  Most importantly, the flavor pairs well with Coconut; which is most fortuitous since coconut tends to play a prominent roll in Southern Asian cuisine.

And, as Jennifer Yu at Use Real Butter can attest too, it makes pretty darned tasty ice cream as well.

Sadly, I must report that the Mega-Mart is not going to be stocking this in their freezer section.  You will have to find your Pandan in the freezer at an Asian Market, though there are "Extracts" available as well.  Personally, I think the extracts are a little more convenient, but I won't use them due to their Yellow 5 and Blue 1 content.   If you have no such reservations with artificial food dyes, then by all means, replace the Pandan leaf in this recipe with a few drops of extract (trust me, a little goes a loooooooooooooong way) 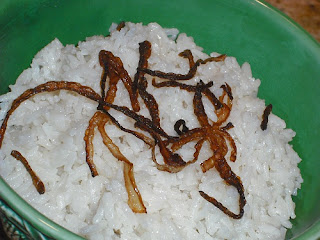 First you need to thaw your Pandan leaves, at least enough to separate 1 leaf from the bunch. 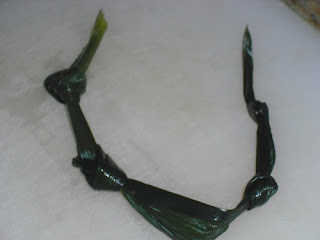 Peel and trim the Lemongrass stalk, then bruise it by smashing it with the flat of your knife (like you would garlic)

Combine Coconut Milk, Water, Coriander, Cinnamon, Lemongrass, Pandan and a pinch of Salt in a medium saucepan and place it over a medium flame. 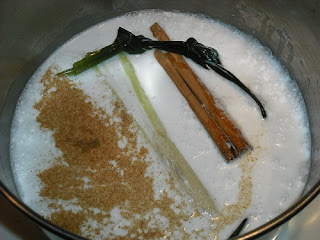 Meanwhile, rinse the Jasmine Rice until the water runs clear. 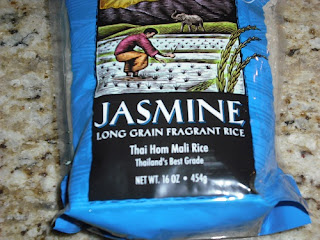 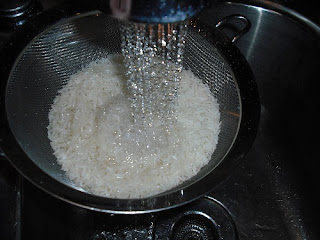 When the water is boiling, add the rice and stir to prevent sticking and bring back to a boil. 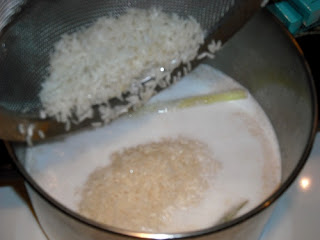 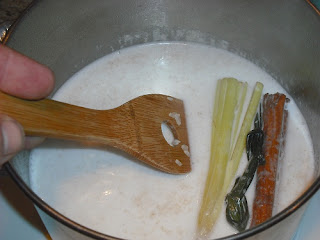 Cover and reduce heat to the lowest possible setting and simmer the rice for 12-15 minutes. 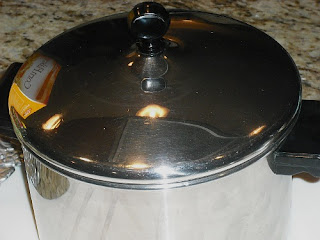 In the meantime, heat some coconut oil in a skillet over medium flame. 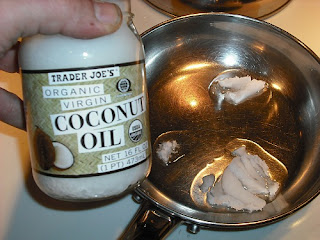 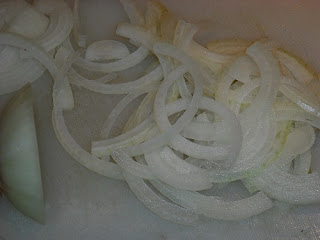 When the oil is hot, fry the sliced onions until they are golden brown. 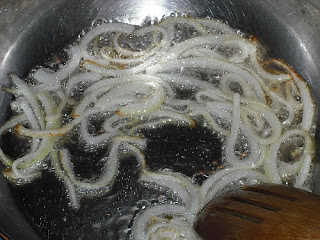 Drain on a paper towel and set aside. 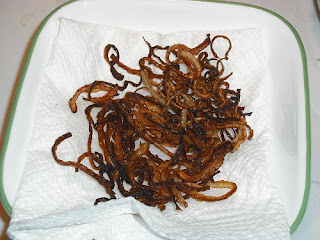 After 15 minutes, you can remove the Lemongrass, Cinnamon Stick and Pandan from the rice. 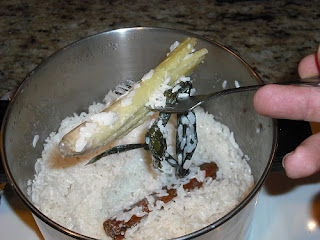 Cover and continue to cook an additional 3-5 minutes. 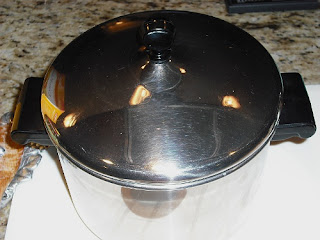 Fluff with a fork. 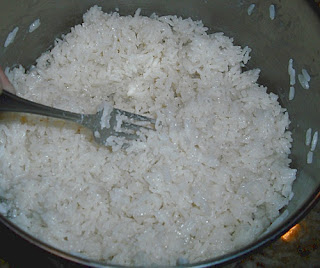 You can either serve in 1 large bowl or dish up individual portions; either way, sprinkle the top with the fried onions and serve. 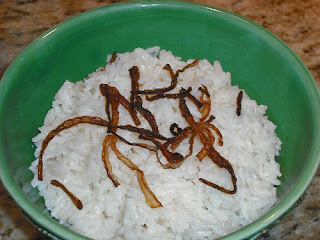 Mmmmmmmm...  Fluffy, yet creamy in texture....  Exotically scented and absolutely delicious!  I would even hazard to say that this just might be better than risotto.  And I LOVE risotto.

Shane it is awesome to see you posting more regularly. Your rice looks beautiful. I need to break out of the box more often and try things like this, it all sounded good except for the onions.