Over the last week, I have become obsessed with this. It HAS to be able to be done, I refuse to believe that it is not possible.

Granted, I am not a Vegan (I know, big surprise huh?) so I don't know much about vegan cuisine and substitutions. BUT, I understand the mechanics behind an angel food cake. So after much research, and even more trial and error...... (It's been a tough "egg" to crack) Yuk Yuk!

Oh, By the way, that whole "1 tsp powdered or 1 TB flake Agar + 1 TB Water - Beat, Chill and Beat again"... Totally Bogus! I don't think anyone has actually TRIED using that as a replacement for egg whites in any recipe. It just keeps getting re-posted on miscellaneous websites, thus propagating what appears to be misinformation.... Either that, or the directions need to be a little more concise. I tried 8 different permutations of this "Agar" option, and each one was a miserable failure at producing anything remotely resembling or behaving like an egg white.

So here are a couple of teaser pics from the first part of the Angel Food Quest... 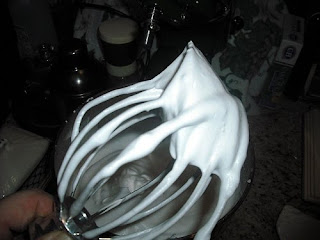 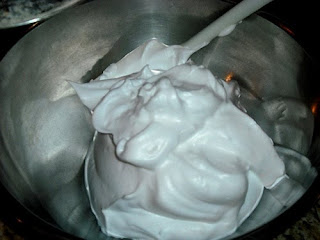 The truth is, I messed up... I had no idea that C & H used bone char to process their white sugar... So I am attempting it again with dehydrated Cane juice... But I have to take a few extra steps to ensure that it will work....
Posted by Shane T. Wingerd at Tuesday, February 16, 2010

I'll be really interested in your results. We have a family member who can't eat eggs.

I'm really curious about the outcome.

Wow! I can't wait to see what you come up with!

Spryte stole the words right out of my mouth. We know you can do it. I love angel food cake, but I will probably stick with the egg whites.

I'm still waiting to find out how it turned out? Were you able to do it? I haven't figured it out myself. :(

Alas, I still have not found a solution. So far I am up to 17 failures. I still have 1 more trick up my sleeve that I would like to try, but with the Holidays coming, I don't know if I will get to it before the end of the year.

Pretty close right now. Light fluffy airy intention, but unfortunately a meringue type crust. Reworking the sugar ratios as well as flour. If I get it before New Years. I'll share.

That would be AWESOME! I wish you the best of luck. I would greatly appreciate seeing what you have come up with. I have not had a chance to try my last option yet and it has been frustrating me immensely.

Any recent attempts at this? Angel Food Cake was my favorite, and I haven't had it in (OMG!) 20 years.

BTW, I wrote to C&H once, and they sent me a letter saying they do use bone char, but only from cows from India that have died of natural causes. That was a while back, so maybe they've changed since then, but I thought I'd share, in case it makes a difference to someone.

How about natural sugars? Bone char, to my understanding, is only used to refine the white sugars. Turbinado should be fine.

So the curiosity is killing me. Did either of you have any success with this? Do we have a winning recipe?

The curiosity is killing me. Did either of you have any luck with this? So we have a winning recipe? :)

There is a product called Bipro. It is powdered form. You mix it with water according to the instructions. Then let it rest until is "jells". Then you can add a little bit of flour or agar agar then whip it on low speed at first. Then turn the speed up. I have used it to make egg less creme puffs. Good luck.

did you try using flax seed goo (strained, boiled flax seed) mixed with some extra baking soda / powder? i've not done angel food cake but in other baking i've done this is the closest i've come to a replacement

Well, I realize that it's 5 years later, but those photos look like you were so close - did you ever solve it? Pure cane sugar (unbleached) is a lot more available these days, would that react chemically in a similar way to the bleached sugar you were using? As the plant based diet becomes more and more mainstream, I'm sure there would be a TON of folks like me out there who would LOVE to have a great vegan angel food cake recipe. I'd be so thrilled if you followed up. Thanks!