When You Get Caught Between the Moon and New York Cheesecake

The first records we have of cheesecake come from the Olympic games held in 776 BC when it was served to the Olympic Athletes. Granted these tended towards the savory as opposed to the unparalleled sweet delight that is all things NY Cheesecake.

While the recipes for "New York" style cheesecake vary greatly, I personally tend to think of it as being very dense, rich, and solid. Lightly sweet, with the tang of cream cheese and an elusive hint of lemon. This varies from what I like to refer to as a "West Coast" style cheesecake, which tends to be on the light side, almost fluffy with a sort of "whipped" texture to it, and of course flavored with everything from peppermint candy to key lime and back again. Not that I am knocking flavored Cheesecake, or any cheesecakers on the West Coast... It's just that NY Cheesecake is something very special and unique.

So, this is my take on a New York classic minus any form of sour cream topping cause I have been informed by many New Yorkers who have moved to the west coast that the sour cream topping on NY cheese cake is an Urban Legend and does not exist. This is fine with me, cause I do not like "baked" sour cream anyway... and if I remember correctly, the piece I had in Uniondale on Long Island, those "oh so" many years ago, was sour cream free as well. Oh, I also use Kadem Tea biscuits 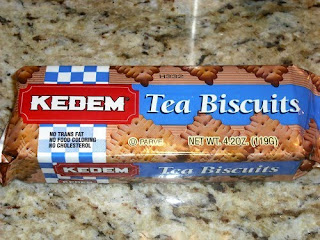 instead of Graham Crackers for my crusts as well as the zest of that ever so delicious Meyer lemon... :) 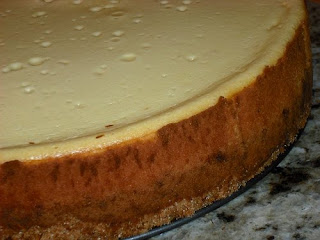 Preheat oven to 350 degrees.
Place the tea biscuits in a zip-loc bag and crush with a rolling pin. 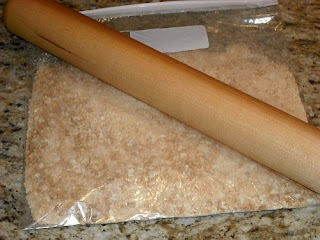 In a medium bowl, mix all ingredients together with a fork 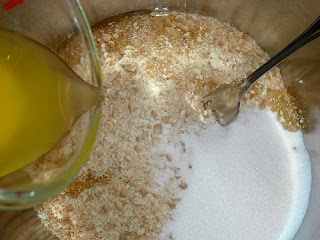 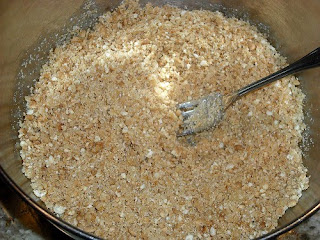 Pour into a 10-inch Spring-Form pan and, using your hands, spread evenly across the bottom and about 1/4 inch up the sides of the pan; pressing down firmly. 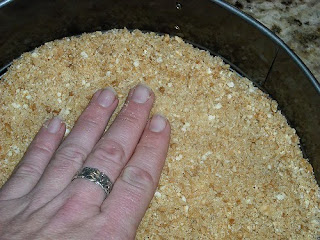 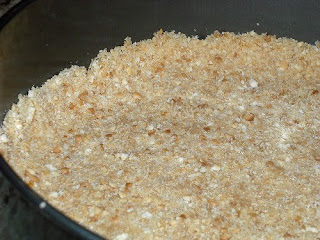 Remove crust, set aside to cool and crank the oven up to 400 while you make the filling...... 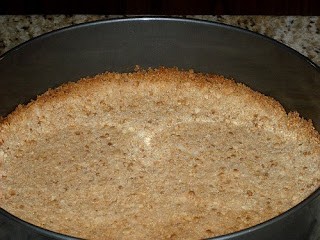 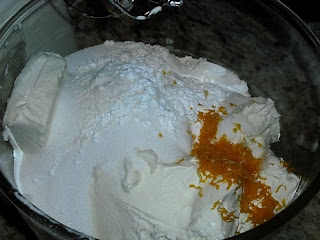 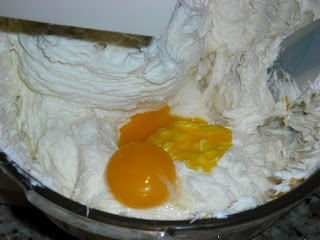 Add the remaining 5 eggs, one at a time, beating well between each addition. 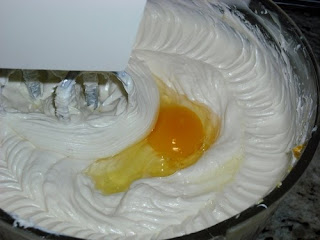 Once the last egg has been incorporated, immediately pour the batter into the prepared Spring-Form Pan. 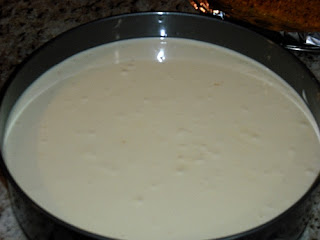 Bake for 10 minutes, then lower oven temperature to 200 degrees and bake for 40 to 50 minutes or until the outer edge is set but the center still wiggles a little. (Remember, this is a custard, so if the center sets completely, then it is over cooked and will be dry) 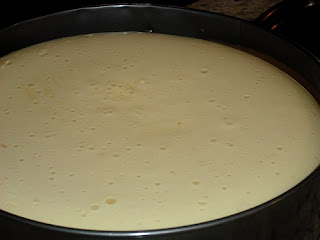 Remove from the oven and let cool for 10 minutes then run a knife around the outside of the cheesecake to release it from the wall of the pan. 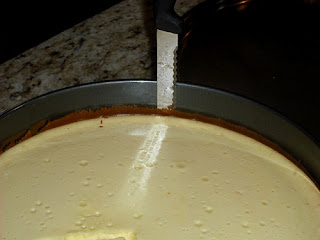 This is to keep it from cracking, because it WILL shrink slightly while cooling and if it's stuck to the pan sides the center will rip.
Don't get distracted like I did...... I let it set for 25 minutes before I ran the knife around the edge and THIS is what happened to my beautiful NY Cheesecake :( 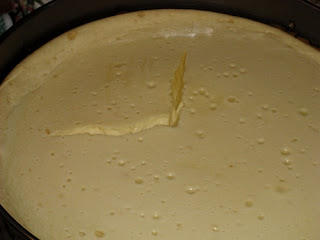 So not only did it come out of the oven with this strange moonscape appearance, which I have never had happen before, but now it has the Grand Canyon running through its western Hemisphere. (sigh) You'd think I had never baked a cheesecake before... Sheesh!

Since I know you all will not make the same mistake I did simply let YOUR beautiful "crackless" cheesecake cool to room temperature. ;) 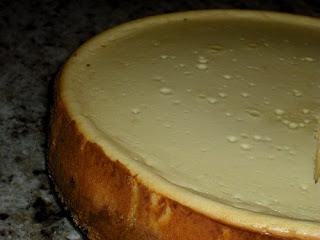 Once cooled, you can either serve your guests or cover and refrigerate.
Bring to room temperature before serving. 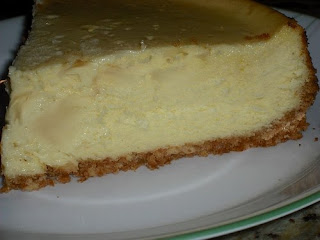 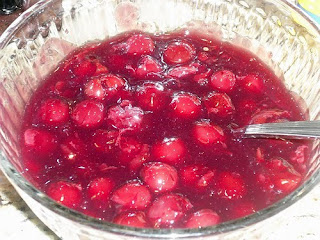 Looks delicious. I hate when cheesecakes crack! So tedious at times but well worth the effort. I also don't use sour cream in my cheesecake :)

I only see one mistake in your recipe, Gran Marnier is OPTIONAL?? Ha ha. I guess I never had a GOOD New York cheesecake, I thought that they were supposed to be dry and that is why I thought I didn't like them. I make a version that is very creamy, but yours looks so good I think I will try it next time I make one. (I have done the cherry topping trick for cracks also.)

Oooh - I really wish I liked cheesecake!! This looks divine :)

I just discovered your blog and read like the past 2 months of entries. I adore you! Hopefully I can do justice to some of these recipes!

Now that's my kind of cheesecake! Heh, I made a similar one some years ago and my girlfriend couldn't even eat it. Said it was too rich.

I still don't fully understand her position, but I was more than happy to eat it all myself. Fortunately cheesecake freezes pretty well. Heh.

cheesecake!! my fav!!! when i make them, i put a pan of water underneath, in the oven...to help prevent the creations of fault lines. haha. but either way, it's all kinds of yum.

I don't mind that Grand Canyon crack, as long as you're willing to share a slice.
I've never made one myself. Let's say it's one of my "to do" projects for this year. Your advice will sure stick to my mind, I don't want the tiny Italy to crack in two :))))