My mother made this a lot when I was growing up.  She obtained the recipe following a potluck at the, then, Troutdale Baptist Church from Dorothy Evans.  This is not really Danish pastry per se, it is more of a pie crust or "broken dough" (Pâte Brisée) with Puff Paste or "cabbage dough" (Pâte á Choux) spread over the top.  Though it may not be made of the same yeast-ed and turned dough as croissants are made of, the result is still deliciousness.  Besides, "Danish Puff" sounds so much more appetizing than "Broken Cabbage", don't you think?

Let me tell ya, this is laden with butter.  Thus it is imperative that, since butter is the principle flavor, you use a good quality butter.  I usually turn to Lurpak or Kerry Gold for this, depending on which one happens to be on sale at the moment.

The Choux paste is pretty standard as Choux paste goes, except for the addition of a little Almond extract.  The Pâte Brisée, however, is much more butter laden than normal.  Where I normally use about 3 cups of flour in total (2 3/4 AP and 1/4 Cake flour) with 8 oz of butter, this version contains 1 cup of flour with 4 oz of butter. Which is why you will need to press it out onto the baking sheet instead of rolling it out, cause it's just way too sticky.

The Apricot preserves are completely optional.  I started doing it a little while back just because, but my mother never did it that way.  She always garnished it simply with sliced Almonds and drizzled it with glaze.  It's one of my favorite breakfast treats, simply because the only sugar contained in the recipe is the Confectioners' in the glaze (and in the preserves, if you are using them) so it's not TOO sweet like so many other breakfast foods.  That always makes me happy, cause I really don't like starting my day out with a sugar buzz. :) 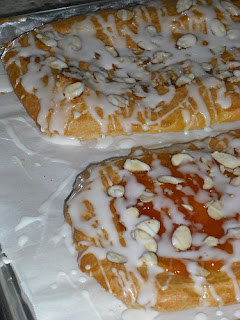 Combine Flour and Salt in a bowl. 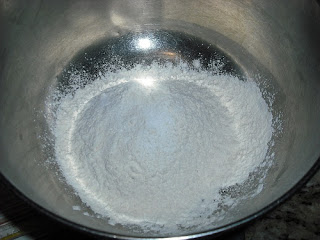 Cut butter into the flour as for Pâte Brisée. 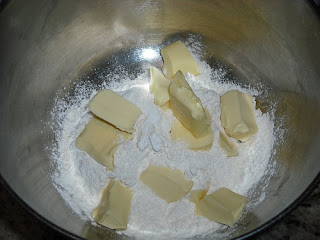 When butter is small pea sized, 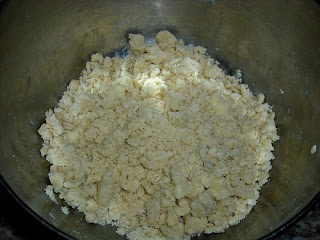 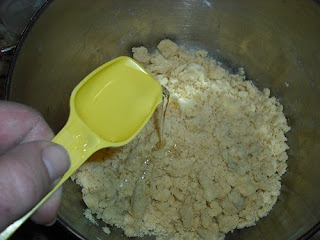 and mix with a fork until the dough begins to come together. 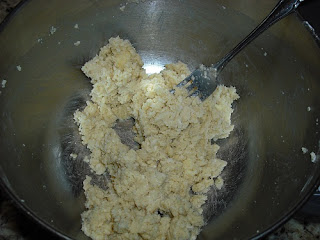 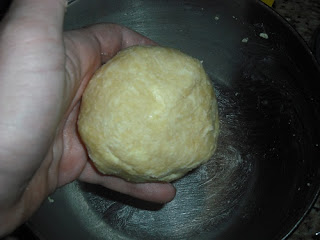 Draw dough into a ball and divide in half. (about 130 g each) 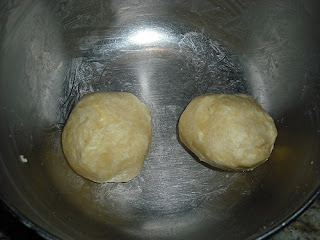 On a large baking sheet, lined with parchment paper, press each of the 2 balls into 12 x 3 strips. 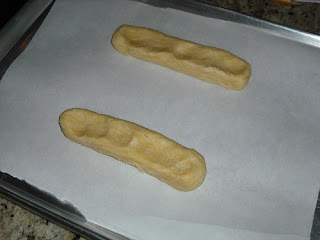 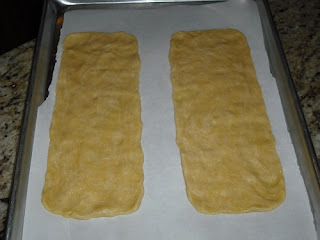 Refrigerate to let it rest while you prepare the Choux paste topping.

Preheat oven to 350 degrees
In a medium saucepan bring water and butter to a boil over medium heat. 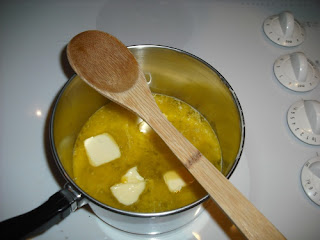 Remove the saucepan from the heat and add Vanilla and Almond extracts stirring to combine. 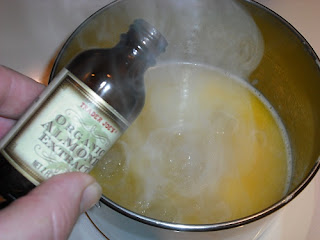 Add the Flour and stir constantly and continuously until the flour has absorbed all the water, 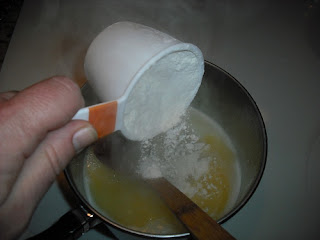 and forms a balled mass that pulls away from the sides of the saucepan. 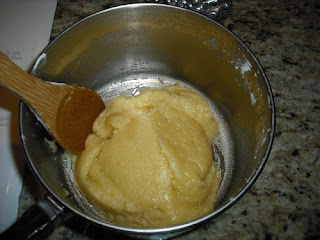 Let the dough rest for about 3 minutes to cool slightly.....
Begin adding eggs 1 at a time, stirring after each until completely incorporated before adding the next. 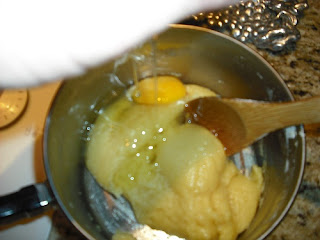 The  dough will break apart and look like a big mess at first.... 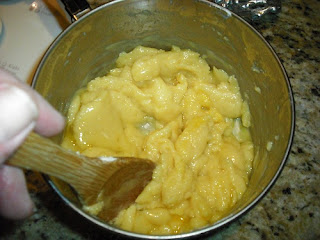 but as you keep stirring it will come back together again..  That is when it's time to add the next egg. 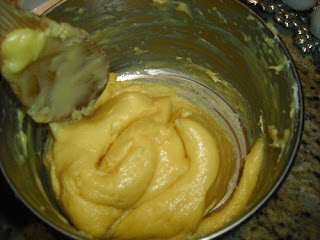 When your done stirring in the last egg, the dough will have transformed into a smooth, yet sticky, paste. (thus the name, Choux paste) 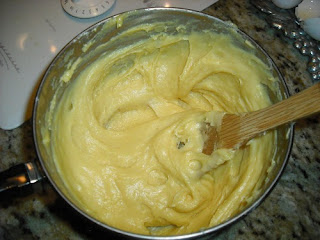 Remove the Pâte Brisée strips from the refrigerator. 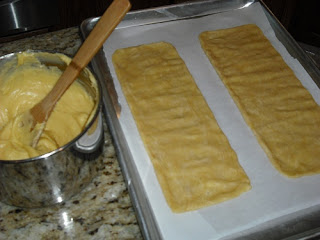 Divide the Choux paste between the 2 base pastries. 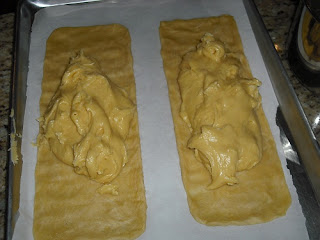 Spread with with a spatula until the Choux is evenly spread over the base. 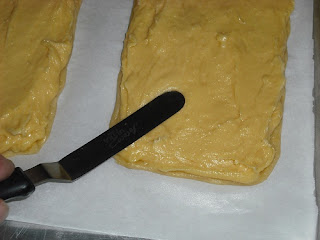 Move to the oven and bake for 50 minutes. (until golden and puffed) 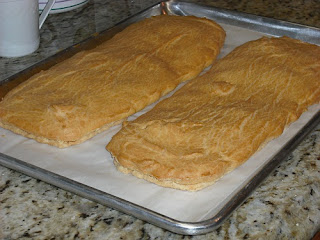 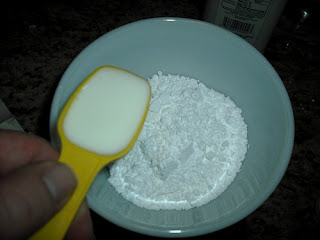 Mix with a fork until smooth. (you are going to want it a little on the thick side, so don;t be afraid to add more Confectioners' if it seems a little too runny) 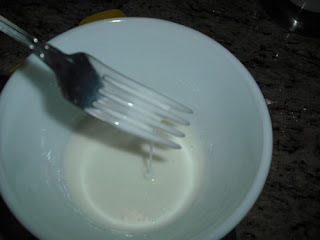 If you like, you may spread pureed Apricots over the surface (I usually only do this to one of them) 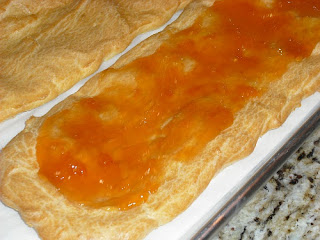 Sprinkle sliced almond over the pastry. 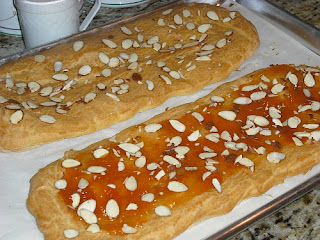 Apply glaze by drizzling with a fork. 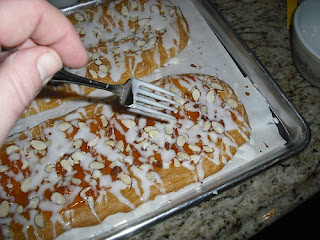 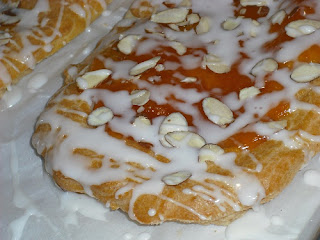 This would be a great thing to have for breakfast. I love your addition of the pureed apricots.

Ah, the good stuff you find in church basement kitchens! :) This is a specialty of a woman that I work with. I'll have to try it with the apricots....yum!!