I don't subscribe to the philosophy of "Real men don't eat quiche".  I call Bologna!  Whoever cooked up that saying, was simply trying to secure more quiche for themselves.  Why wouldn't men eat quiche?  In it's most basic form, quiche is nothing more than an egg pie.  Men like eggs, and most men definitely like pie. (I think it's a "Y" Chromosome thing)  In the case of Quiche Lorraine, you have the added benefit of Bacon.  I think it's safe to say that most, if not all, men like bacon.    mmmmmmm  B-A-C-O-N...  mmmmmmmm  P-I-E...   mmmmmmm B-A-C-O-N  P-I-E...  mmmmmm Q-U-I-C-H-E    L-O-R-R-A-I-N-E...

I have to be honest though, I am sure that my defense of quiche consumption by the male of the species has to do with my parents.  Mom use to bake this Bacon, Potato and Clam quiche when we were kids.  Now you must understand that I come from a long line of fish eaters.  Oh yes.  Pretty much anything that contains some form of water breather is fair game in this family.  We absolutely loved that quiche when we were growing up.  Of course we didn't know it was anything French or fancy or "chi chi pu pu" like "quiche" supposedly is.  We called it Clam Chowder Pie.  Which stands to reason since it IS all about Pie after all; am I right?

Say it with me now, "Quiche is Pie.  Quiche is Pie." Granted, it's a savory custard pie, but it's still pie.  And pie is pie.  My grandfather use to say that there were only 2 types of pie that were fit to eat...  Hot pie and cold pie.  I cherish that small slice of wisdom.

I have heard from some that the reason they do not like quiche is because they don't like custard.  This always amuses me because these are usually the same people who can consume half a cheese cake, pumpkin pie, coconut cream or key lime pie in one sitting; all of which are custard pies.  What exactly constitutes a custard?  Custard is defined as Eggs and Moo Juice (milk or cream) cooked together until thickened.  Whether baked, simmered in a bain marie, or cooked in a pressure cooker, any combination of eggs and milk that begins to thicken, is a custard.  Creme Anglaise, cooked puddings and some mousse bases are also custards. Even cheese "cake" is a custard. True, it's denser than most, but at it's core, it's a custard pie made with cream cheese instead of cream.

My favorite quiche, by far, is Quiche Lorraine.  You just cannot go wrong with Bacon and Egg Pie.

But something strange has happened to Lorraine in the United States.  It's always full of stuff that doesn't belong.  Something must have gotten lost in translation somewhere.  It's probably due to the lack of one of the essential ingredients that CHEESE entered into this quintessential quiche of the Lorre valley.  Not that I have anything against cheese mind you, but it doesn't belong in Quiche Lorraine.  While I am on the subject of mysterious adjuncts, onions do not belong in Quiche Lorraine either.  It does, however, belong in Quiche Alsacienne (Bacon, Onion and Egg Pie).  I think Alsace should be given it's due for adding onions.

But back to the mysterious practice of adding cheese to Quiche Lorraine.

As I stated before, I think I figured out the why of it.  It adds a richness to the quiche that regular heavy cream just doesn't have.  The only problem is that the cheese contains a significant amount of protein and can make the quiche tough.  I HATE tough quiche.  Though I will admit that I enjoy Quiche Vosgienne on occasion (with Gruyere added) the basic issue can be corrected but using the correct cream, and heavy cream isn't the right one.

Don't worry, I am not talking about some fancy cream from a specific breed of cow in France that consumes spring grass and lavender blossoms.  I am simply talking about Crème Fraîche.  Yep, make your quiche with Crème Fraîche instead of heavy cream and it will be perfect in texture and flavor every time.  No cheeses need apply, unless absolutely necessary. (as in the case of Quiche Vosgienne)  Sadly, you cannot substitute Sour Cream or Yogurt; they will curdle and give you a lumpy and less than satisfactory texture.  ew!

I am just sayin', this is how they make Quiche Lorraine in Lorraine.

One of the nontraditional things I do is using a small amount of Spelt flour in the crust.  I tend to think of quiche as being a more rustic dish, thus a little less "refined" flour kinda fits the bill in my book.  It helps that Spelt flour has a delicious nutty flavor without the "sweetness" that whole wheat usually imparts. (it compliments the Crème Fraîche quite well)  I love this crust recipe and have started using it for a lot of savory pie applications.  It's a modification of the pastry crust I originally used on my Asparagus and Gruyere tart recipe (Sour Cream/Peppercorn pastry crust), but it works so well with other flavors (with the spelt added) that I keep coming back to it again and again. 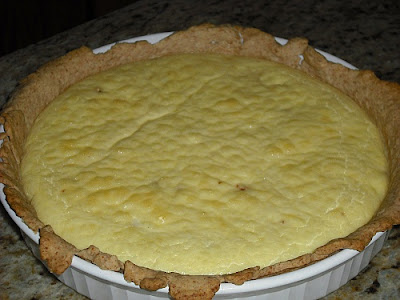 Always remember, the key to perfect pastry crust is cold ingredients and speed. (the refrigerator is your friend)
In a medium bowl, combine AP Flour, Spelt Flour, Salt and Black Pepper (if using) with a whisk. 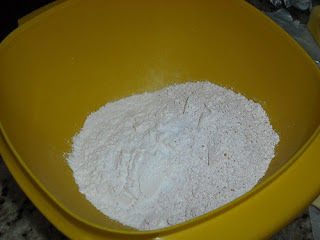 Add sliced butter and work it into the flour with your fingers or a pastry cutter. 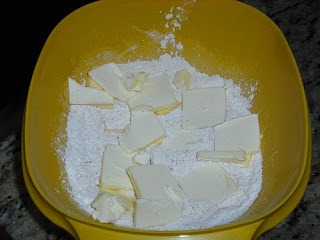 In a small bowl, combine Ice Water and Sour Cream with a fork. 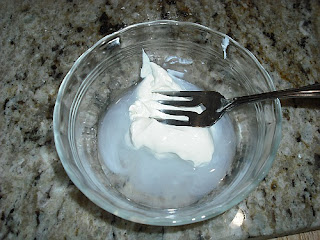 Add this to the Flour/Butter mixture and stir with a fork until a dough forms. 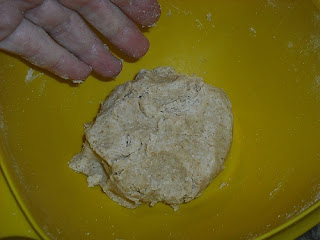 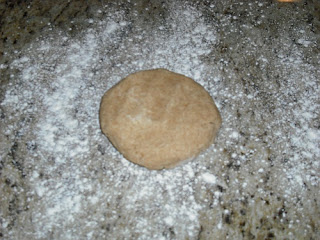 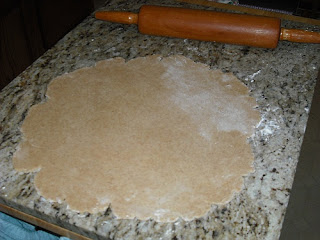 Roll the pastry over your rolling pin to move to your 10-inch Quiche dish or tart pan with a removable bottom. Please take care if you used the Spelt flour.  Spelt makes it a little more tender and it will rip fairly easily if you try to fold it into quarters to move it. 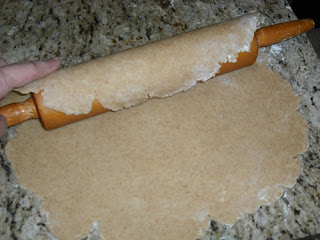 Unroll into your dish and gently coerce it down into the dish. 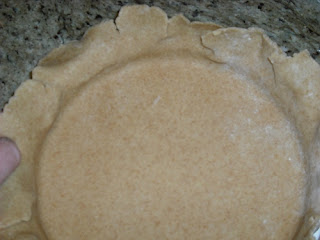 Because of the rustic nature of quiche, I simply tear the extra pastry from the edge and leave it, but your can trim with a knife and crimp it if you like. 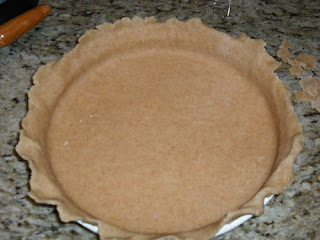 Dock it (poke holes in it) with a fork and refrigerate for 30 minutes. 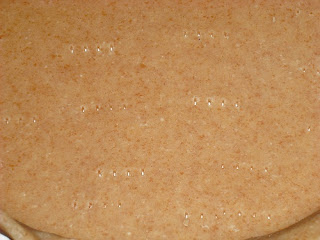 Preheat the oven to 400F degrees. 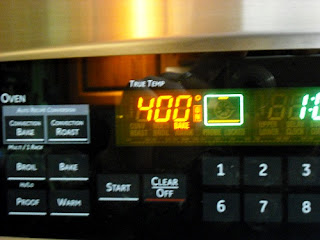 Line with foil and fill with beans, rice or pie weights. 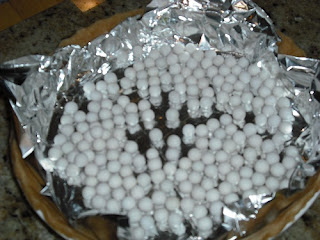 Bake for 10 minutes, then remove the foil and bake an additional 5 minutes. 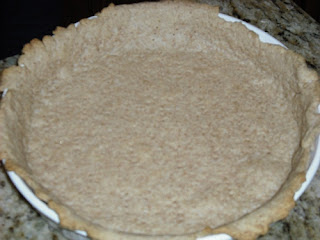 Let the pastry shell cool slightly and reduce the temperature to 325F degrees. 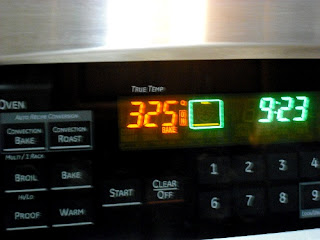 Cook the Bacon. (By whichever method you prefer) 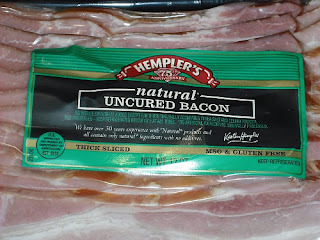 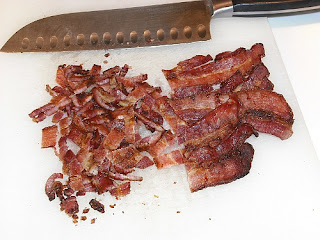 Sprinkle the Bacon all over the bottom of the cooling pastry. 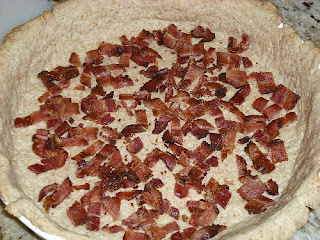 Now, in a bowl, beat the eggs lightly, just until the white and yolk are combined. 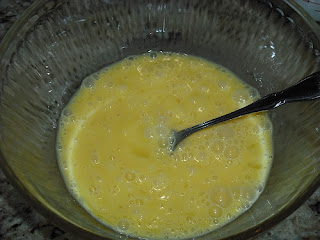 Add the Crème Fraîche and stir well to combine (be careful not the beat it too much, you want to keep the bubbles to a minimum) 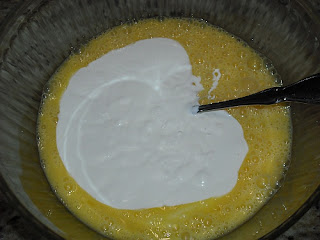 Season with a dash of Nutmeg, Salt and a sprinkle of White Pepper. 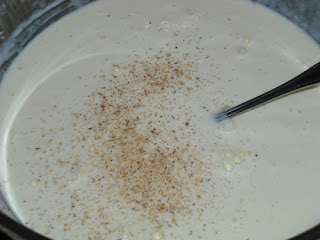 Pour into the awaiting pastry shell very slowly as to not dislodge the bacon from the bottom. (this is why I tend to use thick cut bacon, it doesn't float like the thinner slices do) 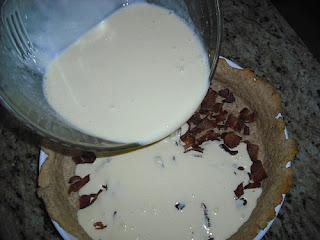 Bake for 15-20 minutes, or until the center is just barely set. 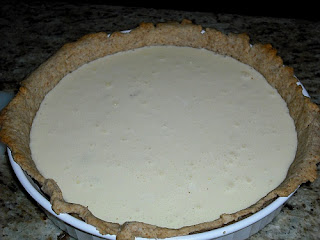 Let rest on the counter for 10-15 minutes to allow it to finish cooking. 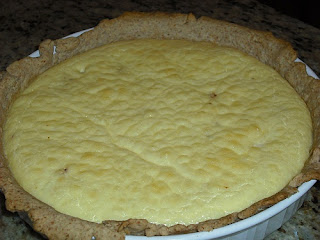 Cut a slice and enjoy the best Bacon and Egg Pie that you ever had. 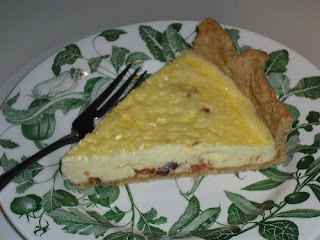