I am a product of American Pop Culture.  I admit it, I have come to terms with it, and accept this in myself.

Every time someone mentions Pork Chops, I hear Peter Brady's imitation of Humphrey Bogart in the back of my mind saying, "Pork Chopsh and Apple Shauce, ain't that Shwell?"  And thus it is that, through the Brady Bunch, I learned to equate apples with pork.  True, there is the proverbial whole roasted pig with the apple in it's mouth, but I don't normally roast a whole pig.  And by "normally" I mean never.  So, for me, it was the Brady Bunch.

Now, I am not saying that I actually "eat" said apple sauce with my pork chops.  It's not that I think the combination particularly odd or anything.  After all, if Peter Brady thought it was "shwell", then it must be, right?  Cause it was on TV, right?  If it wasn't "shwell", then why would the writers give him that line?  No, it's simply because I rarely have apple sauce around the house, and if I do, it has usually been utilized for Apple Sauce Cake or Apple Muffins, or some such other tidbit of deliciousness.  But, I finally got to wondering about the pairing of apples with pork and decided to give it a try.

Now, me being me, I had to walk a path less traveled by; possibly not at all...  By anyone... Ever.  This led to a little experiment (you saw that comin' didn't ya?) with a Golden Delicious Apple. 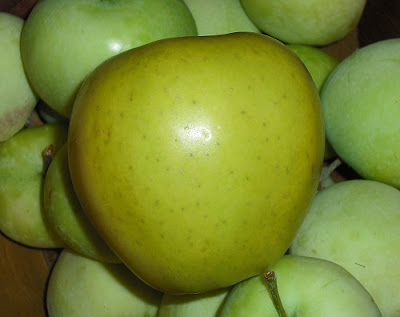 Now I am not a big fan of the Golden Delicious Apple, simply because they are so sweet.  I loved them as a kid, but only when they were green.  And let's face it... Produce moves around this country so fast now days that the farmers don't pick things as green as they use to.  Which has it's pluses, but in this case, the Golden Delicious Apples in the stores are almost always fully ripe.  But for this recipe, I thought I could get away with the apple being on the sweeter side cause I was gonna hit it hard with a crisp white wine and "savor-ize" it up with some Parmigiano-Reggiano and Mascarpone.

If those ingredients ring any bells you probably guessed right.... I made an Apple Risotto.

The verdict on the experiment?  I thought it was tasty... So did my little brother... Savory with a hint of spiced sweetness.  Then again, we both like Cheddar on our Apple Pie so this dish is a natural fit.  My sister-in-law is not a risotto fan, no matter what the flavor so she opted out completely.  Dad was on the fence and Mom hated it.  I don't know... I would call 2 "likes", 1 undecided and 1 "no" a fairly favorable reception considering this side dish's unorthodoxy.

I am still trying to decide if I should have forewent the "hint of cinnamon" and opted for a "whisper of nutmeg" instead.  Personally do not care for nutmeg with apple.  Mace, yes, Nutmeg, no.  I am really more of a Cinnamon person.  I love sneaking Cinnamon in savory dishes when no one is looking.  Any excuse to buck the "system" that has regulated poor Cinnamon to only sweets.  Nutmeg, on the other hand, shows up in Bechamel as well as Spaetzle, Quiche (Lorraine and Florentine) and Scalloped Potatoes (like Pommes de Terre à la Dauphinoise) with a frequency that attests to it's escape from the same predicament as the ill-fated Cinnamon. 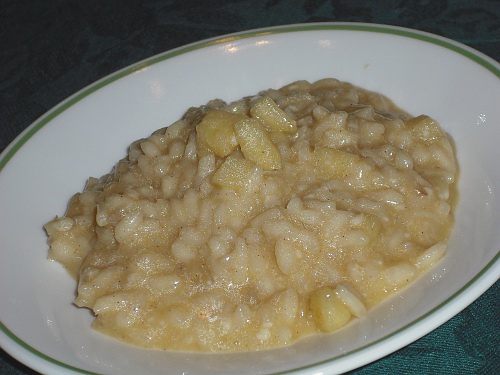 Bring the Chicken Stock to a simmer in a small saucepan and dice the apple. 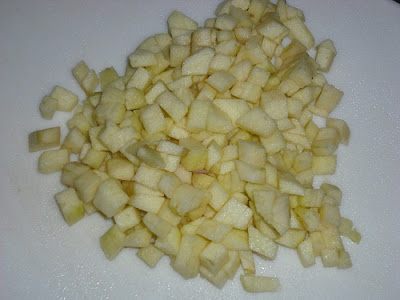 In a large skillet, heat 1 TB of the Olive oil over medium-low flame. 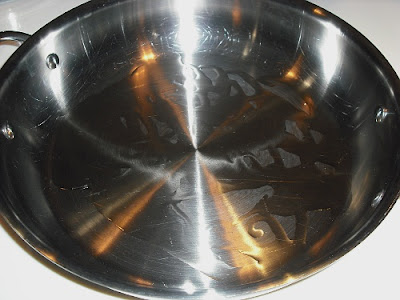 Add the apple and cook for about 10 minutes, just until it begins to soften slightly. 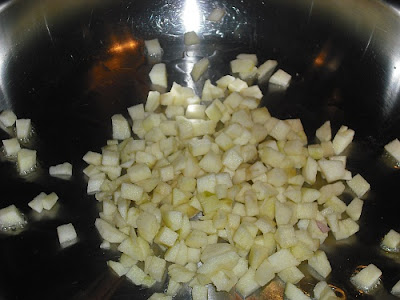 Remove the apple from the skillet and set aside. 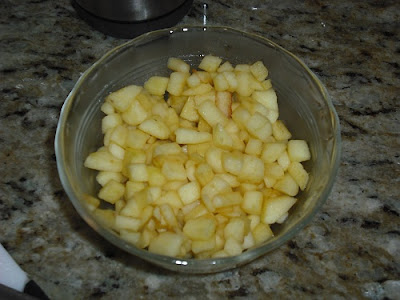 Add the remaining 1 TB Olive Oil to the pan along with the Butter. 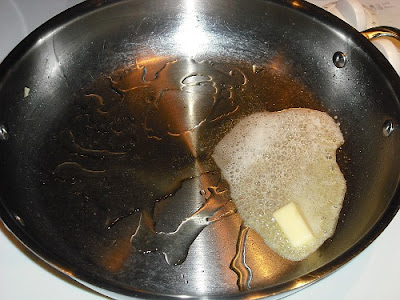 When foaming subsides, add the shallot and sweat until soft. 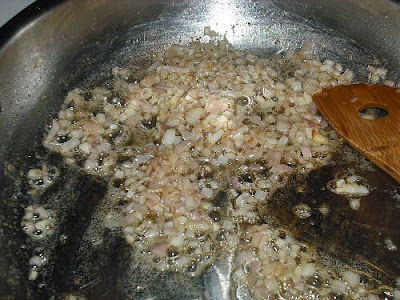 Add the Rice and saute for a couple minutes, until it begins to smell nutty. 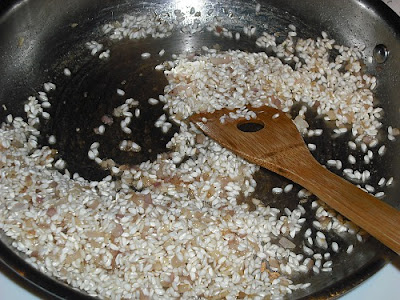 Add the Wine and stir until it is absorbed. 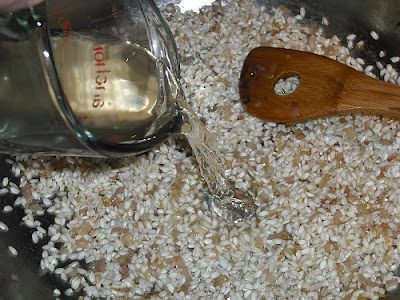 Begin adding stock, 1 ladle at a time, stirring until each ladel-ful has been absorbed before adding the next. 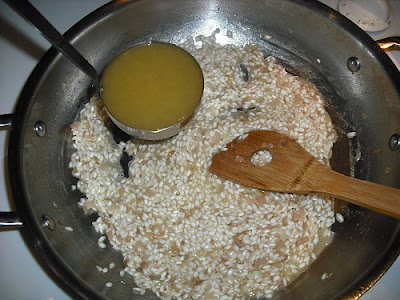 After 10 minutes of cooking (when the risotto is about 1/2 done) add the diced Apple to the rice, then continue adding stock and stirring until the risotto is still a little al dente. (you may not use all the stock) 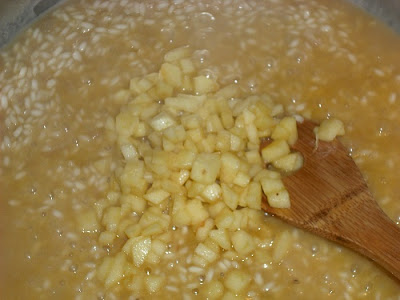 Add the Parmigiano-Reggiano, Mascarpone and Cinnamon or Nutmeg. 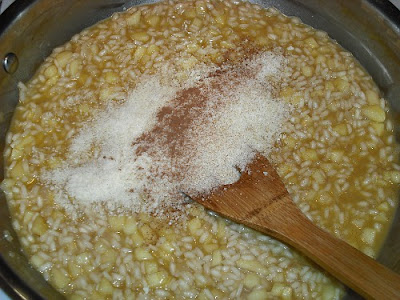 Cover and allow to rest for 3-5 minutes. 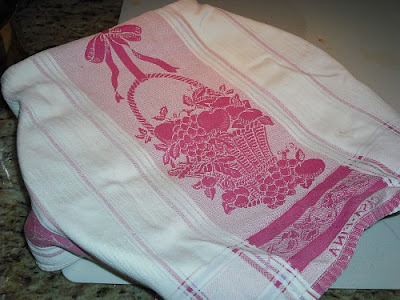 Stir everything together and serve. 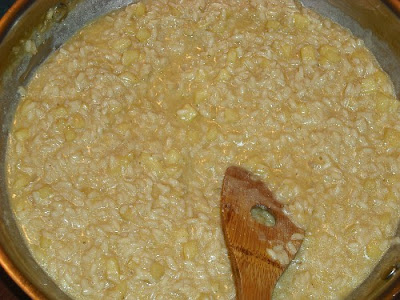 Peter Brady was right, Apple and Pork really do play together well. 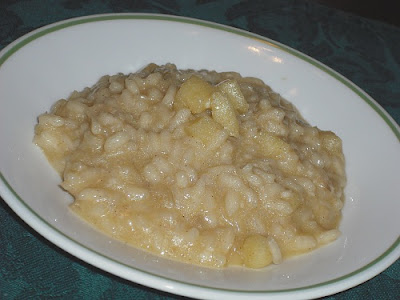 So the next time you are serving Pork chops, or Pork Loin chops or even a Pork Tenderloin, I urge you to give this a try.

My husband does the Peter Brady line all the time when we are having pork. We love pork and apples together. One combo that is delish is sauerkraut and apples with pork. My husband keeps bugging me to make some risotto I will have to keep this recipe in mind.