Solution: Abraham Lincoln and his love of oysters

This was a no-brainer for me... Well, at least the IDEA was a no-brainer... Finding decent oysters in San Diego? That proved to be a little more difficult. Now mind you, being from the Pacific Northwest, not just any oyster will do, since I spent my childhood and first part of my adult life being spoiled on the lovely Olympia Oysters coming from Yaquina Bay on the Oregon coast, or shipped down from Hood's Canal in the Puget Sound in Washington. I DID succeed in finding these tiny little mollusks of delectableness, but I had to wait until a shipment came in from Hood's Canal.

Abraham Lincoln was said to not eat that much. That is unless being served oysters, and then he could not get enough.
In the interest of keeping with the theme of "Honest Abe" I present to you, an honest oyster. Simple, uncluttered by Rockafeller and shooter of cocktail sauce. Granted I could have served them raw, but I tend to reserve that for a restaurant just in case. Here they are simply baked in the shell and served with a little UN-salted butter.
And honest mollusk without a lot of flash, but quite delicious.

Here is a picture of my little beauties prior to their exposure to a 500 degree oven for 10 minutes. 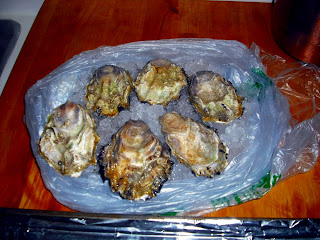 Yep, that's right.... Only 10 minutes in an extremely hot oven... They cook in their own liquor and are absolutely divine.
Please line your pan with aluminum foil, as any liquor that leaks out during cooking will pretty much destroy your pan at 500 degrees. Shown is my Oyster knife... Nothing fancy.. Cost me 7 bucks... The only issue I have with it is that the tip is not bent... A bent tip actually makes it easier to get into the oyster's shell... 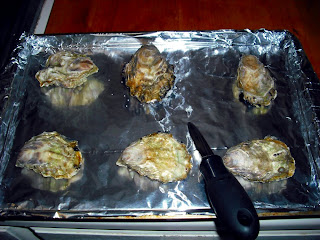 How delicious does THIS one look... YUM! 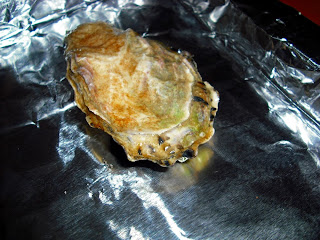 As I said, 500 degrees 10 minutes this is the result after shucking.
Sorry I did not provide a play by play of prying the flat top off the oyster, but that is hard to do when there isn't a second person taking pictures. What is THAT delicious looking thing on my plate beside the oysters... Well, THAT my friend in as lovely Crashed Hot Potato, granted I took a few liberties of my own, adding a little homemade pesto, pine nuts and Parmagiano-Reggiano to it. But it was a perfect accompaniment with the Prosecco... 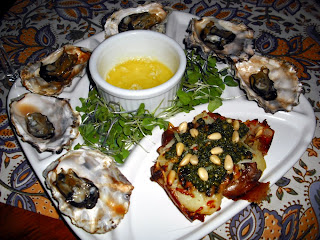 I highly suggest really good Italian Prosecco, not quite as bubbly as Champagne or Asti, the flavor tends to heighten the flavor of the oysters... I don't mean in a mollusk sort of way, but more of an eating the whole entire sea sort of way... If you have ever had GOOD Sea Urchin as a sushi restaurant, this is the type of flavor Nirvana I am talking about. 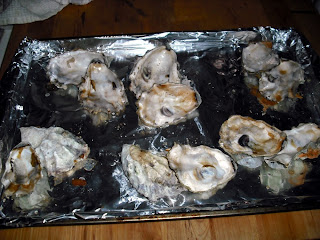 At the risk of switching this challenge over from recipes of presidents to those of classic novels, after I saw the carnage left over from my feast, I really felt like the Walrus and the Carpenter from Alice in Wonderland.

"I weep for you," the Walrus said:
"I deeply sympathize."
With sobs and tears he sorted out
Those of the largest size,
Holding his pocket-handkerchief
Before his streaming eyes.
"O Oysters," said the Carpenter,
"You've had a pleasant run!
Shall we be trotting home again?
'But answer came there none—
And this was scarcely odd, because
They'd eaten every one.

Since you're a big fan of Olympia oysters, check out our oyster contest. We're giving away 4 Dozen fresh Puget Sound oysters to the person who best answers "What would you do with 48 free oysters?" The contest is at MarxFood.com