I have been a little preoccupied, of late, with my nose buried in Tech manuals again.   When this happens I go for extremely quick meals.  That means LOTS o' pasta dishes.  Most of which I have already shared here. (though I have one coming up for those that love fish)

I have really been craving soups however, since it's been so cold blustery.  Yes, the East wind has been howling out of the Columbia Gorge again.  Then the rain decided to get into the act and now it's cold, windy AND wet.  Luckily though, the temperature is several degrees above freezing, so there is no ice anywhere.  Just cold and wet seeping into bones.  Thus the need for soup.

As much as I love soup, it always seems to give me pause.  Soup always seems deceptively easy to throw together, but it usually involved A LOT of chopping, dicing, mincing, slicing and/or julienning (which isn't really a word, but you get the idea)   It's true.  I made a Minestrone alla Genovese about 2 weeks ago... (Yep, there is another type of minestrone besides the one from Milan)  Lord have mercy!!  I swear it took over an hour to chop, slice and dice everything.  Luckily nothing had to be julienne or I may still be in the kitchen prepping for the soup.  Oh, it was delicious and I will be blogging about it later, cause it's a must share recipe. (Time is of the essence and this recipe has fewer pictures... and fewer ingredients)

So, in the interest of quick and easy prepped soups, I present my mom's recipe for Lentil stew. OK, it's not really my mom's recipe per se.... She got it from Horst Mager of the Rheinlander Restaurant on Sandy Blvd in Portland back in the 70's.  Granted it's not exactly the same anymore... (The original recipe) Mom made some tweaks to it over the years, and I have tweaked it myself a couple times.  But it's rich, hearty and delicious which makes me happy when it's cold and damp outside.  As a bonus, the prep time is pretty fast when compared to other soups.

Oh, and this is Pseudo-Vegan as well... Replace the Bacon with 2 more TB Olive oil, substitute Mushroom stock for the Beef stock and your good to go. 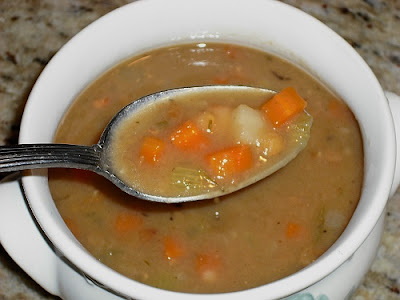 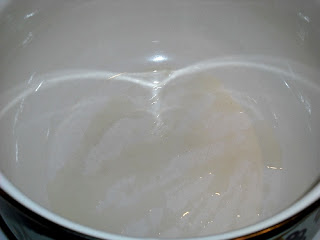 Add the Bacon and saute until crispy and the fat has rendered out. 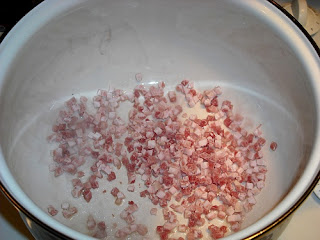 Remove from the stock pot with a slotted spoon and drain on a paper towel. 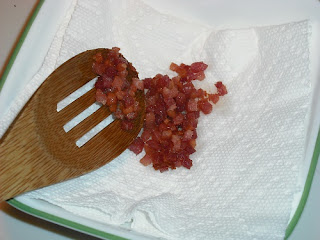 Add the Onion, Carrot and Celery to the hot fat; sauteing until translucent. 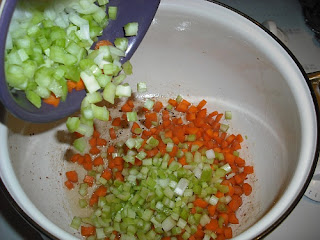 Add the AP flour and stir the "Mirepoix" to assure all the veggies are evenly coated. 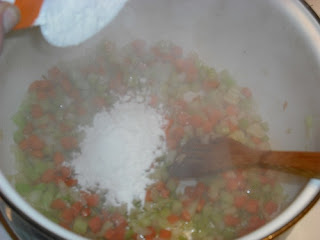 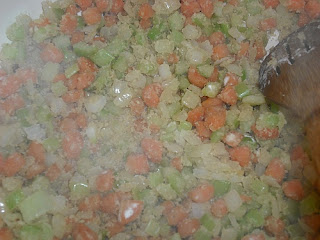 Toss in all the seasonings and stir. 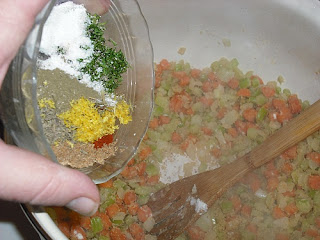 Once the flour begins to smell nutty go ahead and add all the Stock, stirring constantly to ensure the flour dissolves into the stock. 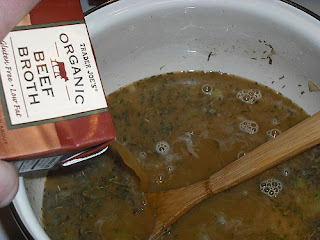 Bring to a boil, while stirring, then add the Lentils, Potato and the Bacon. 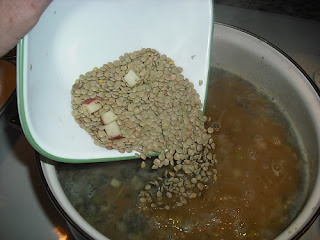 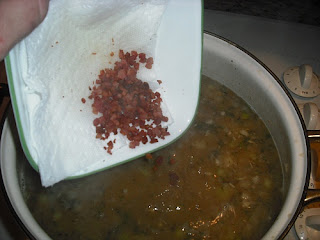 Reduce the heat to low, cover and simmer for 2 hours; stirring occasionally. 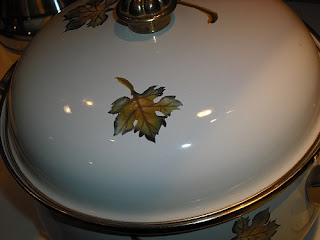 Season with Black Pepper (and more salt if needed) 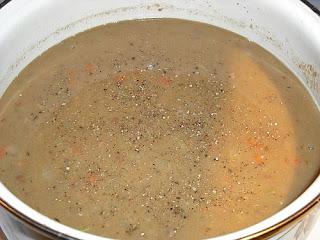 Serve in a big bowl.  In fact I would say that the size of the bowl should directly correlate to the severity of blustery-ness occurring outside your home...   Basically the nastier the weather, the bigger the bowl.  ;) 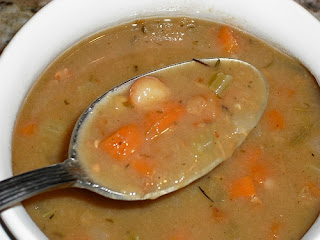 It pretty much looks like a simple vegetable soup, but trust me, looks are deceiving.  LOL

I make this type of lentil soup too. Except that I'm a hack and I throw everything into a crock pot, substituting the already-pilfered bacon with a smoked ham hock! I've been known to throw in frozen shredded hash browns instead of chopping up potato. Are we still friends? - Aleta

HA HA... Of course. That is an excellent idea! I think the only thing I have ever used my crock pot for is mulled wine and cider. I always forget that you can cook food in it. :)

We are huge fans of lentil soup here. I learned the recipe I have while we lived in Germany. mine gets finished off with a splash of sherry into the bowl and a sprinkle of swiss cheese. The wind is howling outside and a nice hot bowl of lentil soup sounds good right about now.