I'm a Hound For Huckleberries - Huckleberry Sauce and Brussels Waffles

It's that time of the month folks. The BakeSpace Challenge for October 2009.

This month we are cooking with local ingredients, somewhat following along the lines of the somewhat trendy philosophy of "Locatarianism". A Locatarian limits the range of their food foraging to within 100 miles of their abode. Considering my new local in the Pacific Northwest I assumed that I would have very few difficulties coming up with something... HA!!! That is until key ingredients to the dishes I had planned started falling out of my 100 mile radius... Simple things that, with modern delivery methods, are available all year long, but aren't grown even remotely close.

Examples.... Lemon, Orange, Lime and Grapefruit... California and Florida are WELL beyond the 100 mile marker. I even had to watch the flour and sugar... OK, I will admit it... Sugar was impossible... It comes from Hawaiian Cane (I know people who are allergic to Beet Sugar). The worst thing though, was not being able to use chocolate... :( It was a sad day....

Then it hit me, like a big bag of "duh"! I have been pining away for the succulent, bright tartness of the Pacific Northwest Huckleberry for 13 years... I should be centering my dish around that!!! (Sometimes I am a little dense) And what better way to showcase a delicious huckleberry, than by applying it to the top of... Oh yeah, you guessed it... One of my favorite foods... WAFFLES!!!

So here is my Brussels (Belgian) Waffle Recipe, revisited with as many local ingredients as possible, all topped off with a delicious Huckleberry fruit topping. I did not photograph the waffle process, because I have already done it before, the only difference is that I substituted 1/2 cup of Bob's Red Mill Unbleached Wheat Flour with 1/2 cup of Spelt Flour from Azure Farms. The eggs were local from the lady down the street and the Honey came from a friend of my parents, Star, who has a winery and manufactures her wines using local wild flower honey.. :) Of course I had to go ahead and use Tillamook Butter (They use to only make cheese) 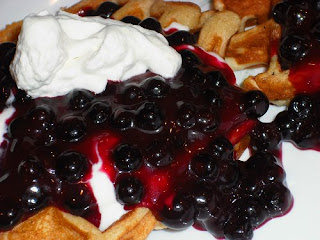 Topping:
2 cups Pacific Northwest Huckleberries (frozen - Cause picking season is over)
1 TB Cornstarch (It's Argo, I have no idea where it comes from)
1 TB Local Wild flower Honey (from Leaning Star Winery - She use honey to make her wine)
Pinch of Pacific Sea salt
1 TB Tillamook Butter

Sprinkle yeast over the 1/2 cup warm milk in a small bowl; set aside about 5 minutes to wake up.
In a large bowl, whisk flour, sugar and salt together.
Lightly beat the egg yolks with a fork in a small bowl
In another small bowl or glass pitcher mix 1 1/2 cups warm milk with vanilla
Add melted Butter, then add the beaten egg yolks.
Add butter/milk/yolk mixture to the flour/sugar mixture, beat until smooth.
By now your yeast should be good and bubbly; Stir it down to get it well dispersed though the milk.
Then stir the yeasted milk into the batter.
Beat egg whites until soft peaks form; fold gently into batter.
Cover and refrigerate overnight. If you want to make them now you can leave it out on the counter for about 1 1/2 hours until doubled in volume, but the flavor is better if refrigerated overnight.
Preheat an electric waffle maker.
Remove from refrigerator and stir down batter.
Spoon about 1/2 cup batter into each waffle grid and use the back of a spoon or an icing spatula to spread over the grids a little.
Close iron; cook until waffle is well-browned and the waffle is no longer steaming (about 4 to 5 minutes).
Transfer cooked waffles to a wire rack and keep warm in an oven, set to 200 degrees, until all the batter has been cooked. 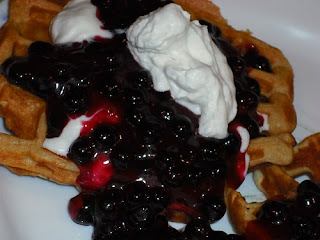 This is the same way I make my filling for a Huckleberry Pie, which is really more of a tart as I refuse to actually cook the huckleberries, it ruins their texture especially once they have been frozen... 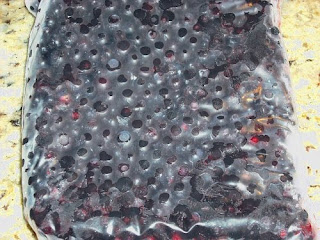 2 cups Pacific Northwest Huckleberries (frozen - cause picking season is over)
1 TB Local Wild flower Honey (from Leaning Star Winery - She uses honey to make her wine)
1 TB Cornstarch (It's Argo, I have no idea where it comes from)
pinch of Pacific Sea Salt
1 TB Tillamook unsalted Butter


First divide the berries evenly, placing 1 cup in a sauce pan and 1 cup in a bowl (set the bowl aside). 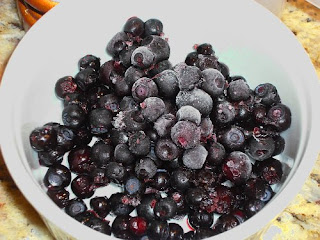 Add Honey and Salt to the Berries in the sauce pan and allow them to juice up for 10 minutes.
Pour the juice off into another bowl and make a slurry with the juice and the cornstarch. 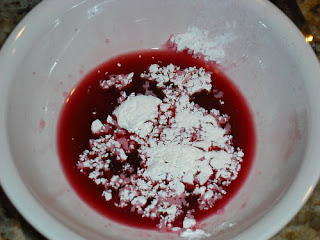 Add the slurry back to the saucepan and place over medium flame; 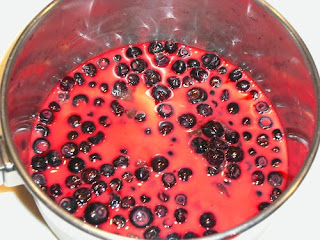 cooking, while stirring, until thick and bubbly. 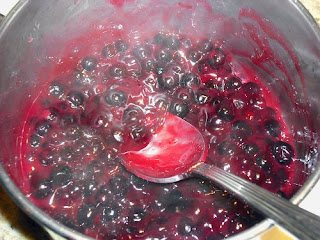 Remove the sauce pan from the flame and fold in the remaining berries from the bowl. 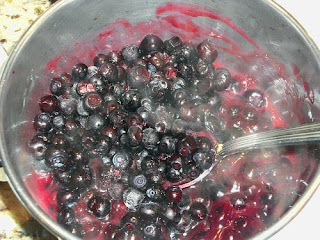 Then fold in the butter until melted. 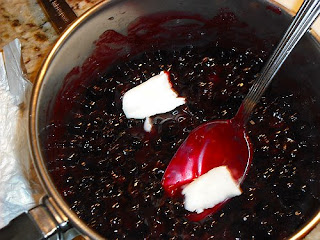 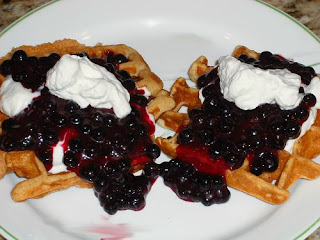 Cool! I've never seen huckleberries before but they just look like darker blueberries.

Okay you hound you, now you made me so so hungry for huckleberries. As a young child I used to pick these with my grandmother on a mountain near her house. I swear I will never forget how good they were. And could there be anything more perfect to put them on? I think not. Great job on your challenge.

I want huckleberries so bad. You just can't find them here. The waffles sound amazing!

How I wish I could try these. I had to look up in the dictionary, and in Croatian it's translated as American bluberry.
The picture of your waffle is killing me :))

omg...I'm drooling!!! (you drooled on mine, i can drool on yours LOL). I had no idea that huckleberries looked so much like blueberries. they look great!