This is, in essence, a guest post, by proxy. I guess that would be the proper term. Let's see if I can explain.

My aunt Delores is down from the Seattle area and we all had breakfast together this morning. Granted, I don't usually eat breakfast, other than a cup of coffee and maybe a piece of toast. Though I am fond of breakfast foods for evening meals. :) But it was a special occasion, and there were a lot of Half-Free Morels.

Which reminds me, I need to insert a tangential paragraph here. I have corrected the previous post, but I am going to apologize for feeding everyone a bit of misinformation. I referred to the mushrooms my Dad and I collected a couple of days ago as "False-Morels". This was incorrect. There are 2 kinds of Morel mushrooms. One is the prestigious fully attached cap, which includes the Black & Yellow Morels. (Of which we found only a few) Then there are the Half-Free Morels. Which includes the lion's share of the mushrooms we collected the other day.

The False Morel is NOT edible. OK, even that is somewhat misinformative, but they ARE dangerous to consume. They are somewhat popular in Scandinavian countries; but are usually boiled twice before cooking. Thus rendering their carcinogens inert. But they are still dangerous, as some people are more sensitive than others. So it's kind of like a crap shoot.

So we had all these lovely Half-Free Morels that were just BEGGING to become breakfast fodder. I was in the mood for something like Mushroom Gravy over Buttermilk biscuits or a Morel Omelet or even a Fritatta. These ideas didn't go over to well. In the end they were simply floured lightly and pan fried to be served along with my mom's "Nutty Diane's Waffles".

Yeah, I pretty much got booted out of the kitchen this morning. I was a little dazed and confused at first, then I remembered that I had my camera, so I snapped photos while mom made her infamous Waffles and my aunt Delores fried up the Morels.

My only contribution to breakfast was the final assembly, though I was the only one who ate my Morels ON my Waffle. Everyone else covered their waffles with Whipped Cream and Huckleberries, then consumed their Morels on the side. I always gotta be different... LOL 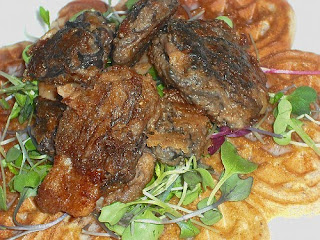 In a medium bowl, whisk the Spelt, AP Flour, Baking Soda, Granulated Sugar and Salt together. 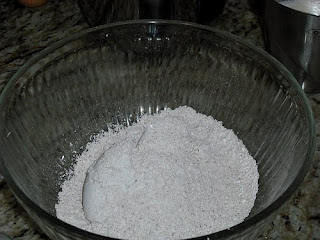 Measure the buttermilk and add the vanilla. 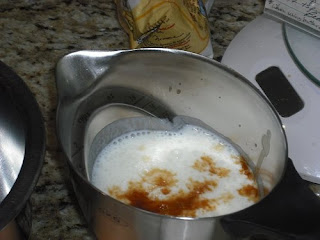 Separate the eggs and whisk the yolks with the buttermilk. 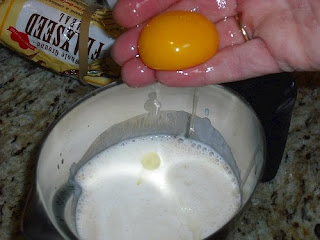 Add the Olive oil to the buttermilk as well. 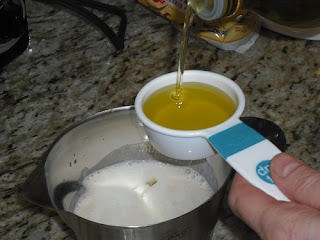 Whip the egg whites until stiff peaks, then set aside. 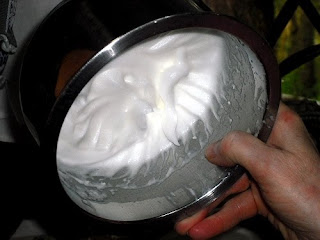 Whisk the Flax Meal into the Flour mixture. 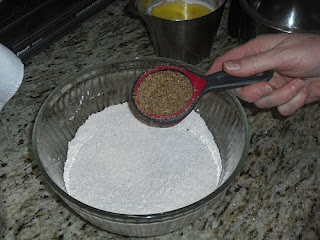 Pour the buttermilk mixture into the dry ingredients and mix until well combined. 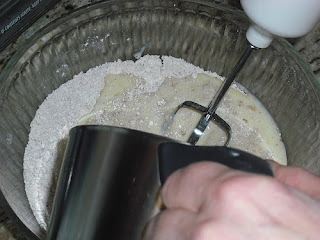 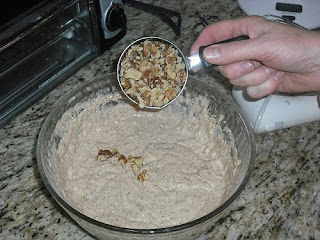 Finally, Fold in the Egg Whites. 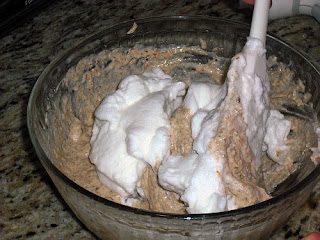 Bake in either an American or Danish Waffle iron until the steam subsides. (I tried this a long time ago, in a Belgian waffle iron and it doesn't work very well.) 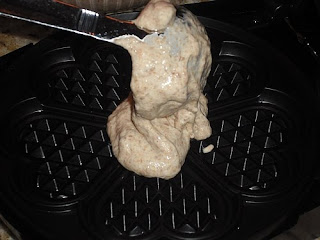 Place on a cooling rack in the oven at 175 degrees to keep warm while baking the remaining batter. (Unless someone walks by and steals your waffle while your trying to photograph it) 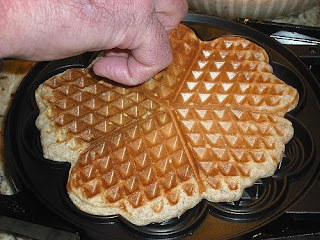 Normally, these are serves with Whipped Cream and Huckleberries or Maple Syrup, but today was a special day.

Wash and dry the Morels. 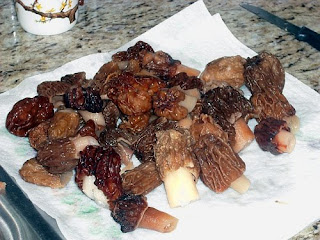 Mix a pinch of salt and pepper into some flour (yeah, this is pretty free form here) then simply roll each mushroom in the flour so you get a really light coating.
Fry in melted butter until golden. 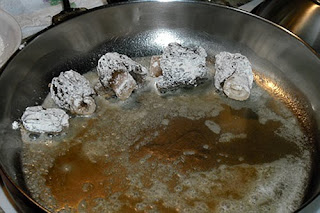 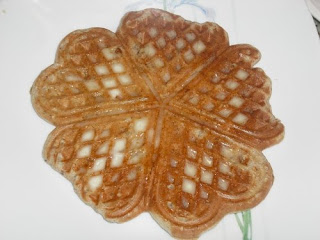 Place a small bunch of Microgreens on top. (That's to kind of offset the butter) 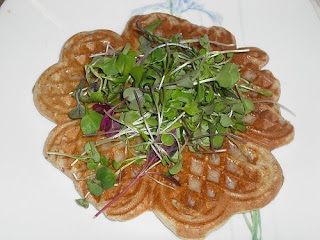 Top that all off with a small bunch of those precious fried morel mushrooms. 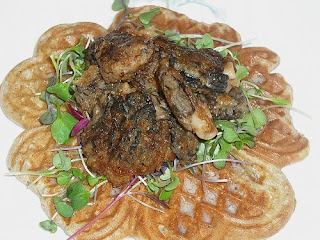 Totally Delish. Very much along the venue of Chicken & Waffles. Only even more awesome! Crunchy, Nutty, Earthy yet Fresh tasting, thanks to the little bit of greens, all finished off with an elusive hint of sweetness.

Back in the old days when I was little, my family would go morel hunting. I always found more than the adults....must have been because, at the time I was the closest to the ground.

That's exactly how my mom used to cook her morels....flour and fry. She loved them that way.

i hope you've learned your lesson young man ;) LOL. Ok...I have another confession....I've never made waffles.