Its 1978. Bell bottom jeans were still in, though they would soon be replaced by peg leg jeans by Jordache and Lawman. Grease was "The Word", but Jaws 2 and Piranha were scaring people out of the water again.

Jimmy Carter signed 2 bills. One authorizing the minting of the Susan B. Anthony Dollar, and the other legalizing Home-Brewing of Beer. (Thank God)

Sadly, Harvy Milk is assassinated in San Francisco, but the general population is also breathing a sigh of relief as the Son of Sam is convicted.

Me? I was 9 years old, wearing bell-bottom jeans and being introduced to a dairy goat for the first time (we moved to the farm in late September of '77) My Summer days were drifting away, though I was a little too young for "those Summer Nights". I would be busy catching polliwogs or creating a bow out of string and a vine maple stick. 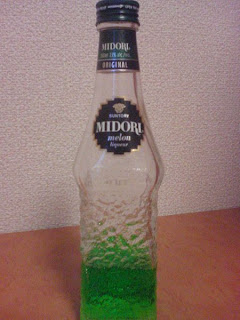 I have mentioned my increasing disappointment, in previous cocktail posts, regarding the lack of skill required to be a bartender now days. The exorbitant prices charged for 2 squirts from a gun containing as many as 8 different high fructose corn syrup laden products. So in the spirit (Ha ha) of saving you from that nasty bottled sweet and sour mix, here is the original recipe for a Midori Sour, using real Lemon, Lime and Soda water. As it originally was made before laziness and profit-philia set in to the local bar scene.

I will admit, this is going to be more sour than what is usually offered at your local "watering hole"; but this can be tempered by the addition of a sugared rim, just like on an Amaretto Sour. This leaves the sugar consumption up to the drinker's discretion. A good practice, but I was making this for a confirmed sour puss ---- Me. So I left it off. :) 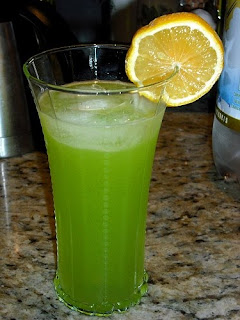 Fill the cocktail shaker with ice and rim the glass if you like. 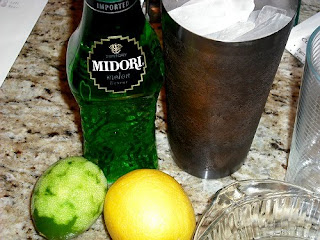 Juice the lemon and strain 2 oz into a measuring cup (I know, I should be using 2 ponies, but I was only making one drink and doing it on the fly) 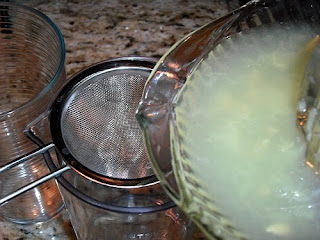 Juice the lime and add 1 oz to the measuring cup. (I removed the zest to save for a Mother's Day project) 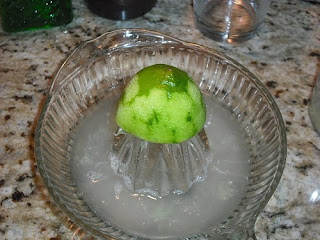 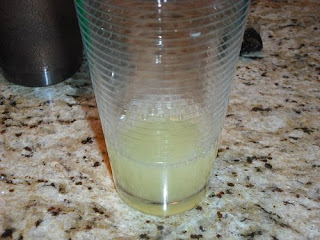 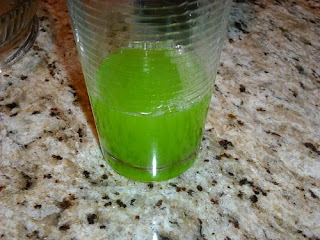 Pour over the ice in the shaker, cover and shake until well chilled. 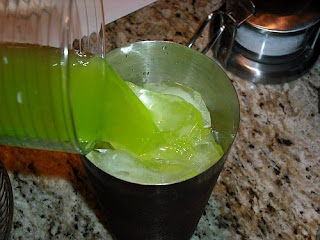 Strain into the cocktail glass. 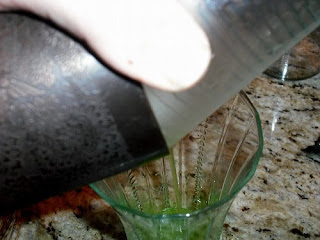 Pour seltzer up to the rim (about 5 oz), then stir gently with a spoon. 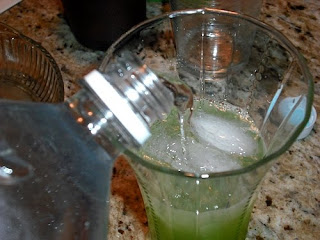 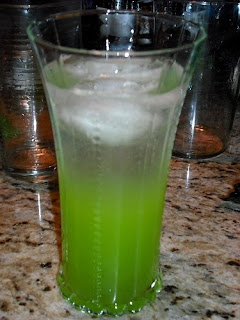 Deliciously tart, sure to quench your thirst on the hottest summer day!

I haven't had Midori in ages. I absolutely love all things tart. This looks perfect to me, minus the suggared rim of course. I have to admit I was a bit sad, looking at all your wonderful pictures, in all our moves, my glass juicer somehow came up missing. I have a darned plastic contraption I hate right now. Hmmmmmm time to go on a hunt, I am sure you can still get glass ones somewhere. I enjoy reading your blog so very much.

Wheres mine?! Maybe instead of a wine party, we can have a midori sour party...I'll bring the lamp shades ;)