I notices several confusing things when I was looking for a way to make, what I thought, were candied crab apples. What I had in mind was something as simple as a candied apple, you know... An apple dipped in a candy syrup and.. Ta Da! Your done.

This is evidently not the case when looking up these sorts of recipes. Most of what I found was a 4-14 day process of soaking fruit in progressively more concentrated sugar syrups until ALL the water in the fruit is replaced with sugar, at which point the fruit is then dried or stored in said syrup until ready to use. Kind of like how they make maraschino cherries, minus the toxic chemical soaking. That is another post though.

Since the internet really only provided the same 2 recipes over and over again, I decided it was time to do some research, the hard way. ALL the old cookbooks came out. Finally, after Irma and Fannie let me down... Heck even the Women's Home Companion and Mrs. DA Lincoln failed to deliver. There in the depths of The American Woman's Cookbook, by Ruth Berolzheimer was the recipe I had been looking for. Glacé Fruit (glaws-AY). Right above the proverbial Candied Fruit recipe. She had made a distinction between the two.

The "Candied" fruit was the recipe requiring massive amounts of sugar syrup soaking, while the "Glacé" fruit was what we, nowadays, refer to as a candied apple. I was very pleased. So armed with this recipe and a bunch of well washed, well dried, room temperature Crab Apples, I am all set to Glacé away! 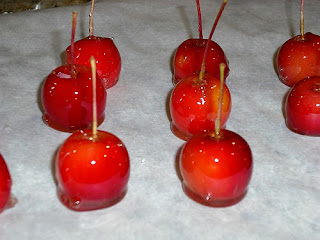 Wash and dry the Crab Apples. (They must be completely dry or the syrup will not stick) 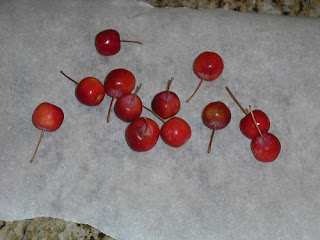 Combine Water, Sugar and Corn Syrup in a small saucepan over medium heat and bring to a boil. 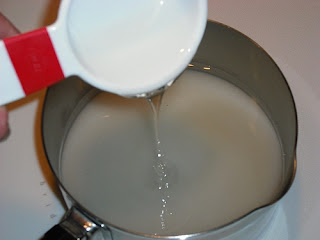 Once it boils, place a candy thermometer in the syrup, cooking to 300 degrees. 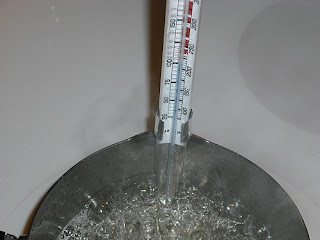 When the syrup reaches 300 degrees, remove the pan from the heat and begin, very carefully, dipping each crab apple, holding it by the stem, into the syrup. 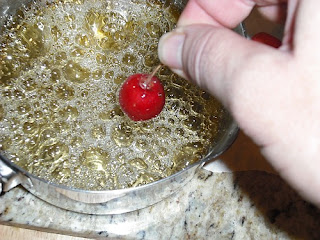 Let some of the excess syrup drip off, and move the dipped cherry to parchment paper to dry.

Oh, so why the obsession with Glacé Crab Apples?  Well, they definitely are not for eating...  LOL  Though I guess you could, if you wanted to.

I am in the process of making a Black Forest Cake for my Nephew for his Birthday, and, well, cherries are WAY out of season right now, even the Chilean cherries aren't ready until early January...  So I am hoping that these Glacé Crab Apples will look, at least a little, like candied cherries on top of his cake. (I refuse to put those NASTY artificial flavored/colored Maraschino cherries on his cake)

So this is really just the first step to a Black Forest Cake..... Oh yeah baby! It's commin.... LOL

That's awesome. Can't wait to see the cake! We made candied and caramel apples for a party a few years back. The caramel apples were gone in a flash, but it seems nobody here knew what to make of the candy apples. Odd! LOL

I have that Cookbook!! Those are the cutest crab apples disguised as cherries I've ever seen.