A Christmas family tradition since... hmmmm... Well, at least since *I* was born, but probably longer.  I honestly cannot remember a Christmas that didn't include this most decadent of all Christmas candies, made with love by Grandma Reva.   OK, there were many Christmases in San Diego that were devoid of this holiday treat from grandma's hearth, but now is not the time to ruminate upon sad times.  LOL

I have actually tried to make this before, when I was living in San Diego.  After all, it's just not Christmas without it.  All my attempts ended in chewy toffee, or slightly sugary toffee.  Basically, a massive failure.  Come to find out, after discussing this with grandma, Almond Roca/English Toffee is REALLY touchy about humidity.  Candy usually IS touchy when the air is damp, but this one is particularly finicky.  You would think that San Diego would be dry enough, being coastal dessert and all, but alas, the humidity is still on the high side during the December months.  So, repeat after me... "Dry weather is Almond Roca's friend"

When making Almond Roca, there is another issue to be aware of besides the humidity...  There is an entire POUND of butter in this stuff and that equates to a lot of milk protein.  Milk proteins scorch very easily.  Thus, though it is usually frowned upon, you MUST stir this candy constantly during the cooking process to avoid any scorched flavors.  You will also need to use a good quality butter as well.  Oh, I am not talking about the fancy cultured butter or anything like that, but you need to be aware of the butterfat/water ratio.  The more water means a longer boiling time and a longer boiling time leaves more time for the candy to scorch.

Why is there so much butter in the toffee?  Well, aside from the richness it imparts to the candy, there is the matter of the sugar crystallization.  Toffee is basically a Hard Crack candy, like Peanut Brittle or Rock Candy.  Brittle is usually a little more tender due to the carbon dioxide gas produced by adding baking soda at the end of the cooking process, right before pouring.  The little bubbles of gas interfere with the sugar crystal formation, forcing smaller crystals to form and thus making the candy more "brittle" than rock candy, which is called rock candy for a reason... It's hard as a rock.  In order to produce a toffee that doesn't break your teeth, you add copious amounts of butter fat.  The fat interferes with the formation of the the sugar crystals, just as the carbon dioxide gas does in Peanut Brittle. The end result is a much more tender, yet crisp candy that isn't quite so hard on your fillings and crowns.  ;)

I have done my best to explain the process, but there are certain things that are very difficult to convey.  I have made 3 batches today, and they all finished at different temperatures.  There is a particular color of brown that the syrup changes to when it is ready... anywhere from 298 to 305 degrees.   I took 302 F as an average of the temperatures.  Hard Crack stage is at 300 F.  So it's a pretty safe bet, that if you cook it to 302 F, it will be fine.  Just don't go past 305 F.  Not only will the sugar begin to burn but the milk proteins from the butter will definitely burn.... 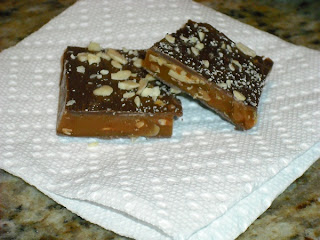 Line a 15 x 10 baking sheet (the same size I use for Grandma's pumpkin roll) with parchment paper or apply a thin coating of vegetable oil. 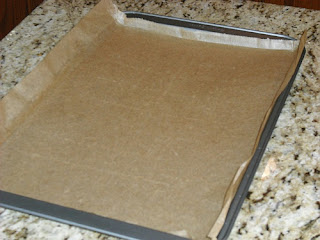 Melt the butter in a heavy bottomed saucepan over medium-low heat. 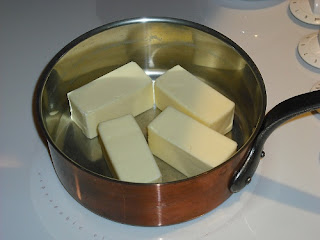 Mix Water, Salt and Cream of Tarter together in a small pitcher, making sure the salt is dissolved completely. 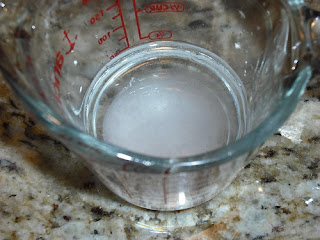 When the Butter has melted completely, add Sugar.... 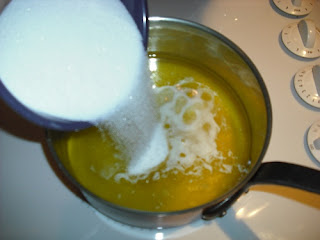 and the Water mixture and stir to combine. 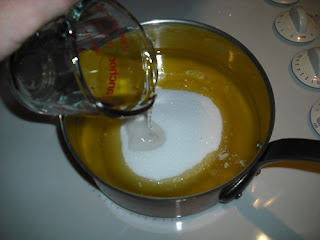 Add the Golden Syrup and stir some more (this is just the beginning, you are going to be stirring A LOT during this process)

Stir until the mixture comes to a boil. 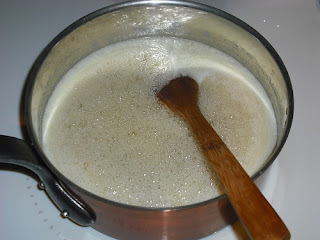 Add the candy thermometer, making sure it is not touching the bottom of the pan, and continue stirring. 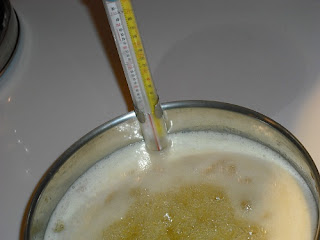 Make sure you do NOT increase the temperature past medium, or your risk of scorch increases exponentially.  Just be patient, and continue stirring... 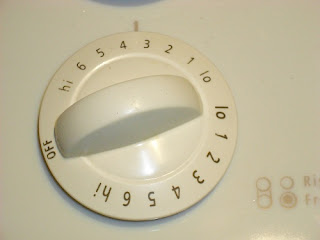 The syrup will foam up a lot at first, then it will settle back down and slowly change from beige yellow to a rich golden brown....

When the thermometer reaches 295 F (146 C) degrees, add the slivered almonds and stir them in. 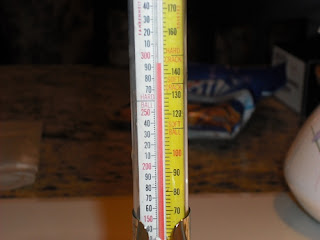 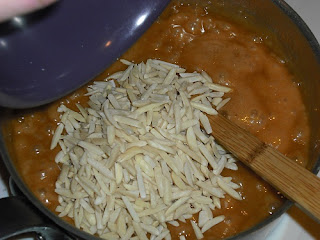 Continue stirring as the temperature drops a little, down to about 285 F (140 C), just keep on cooking it over medium-low heat, stirring constantly... 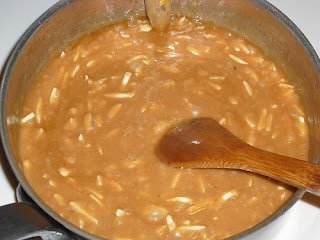 The temperature will begin to climb again after a couple minute...  Watch closely until it reaches 302 F (150 C) degrees. 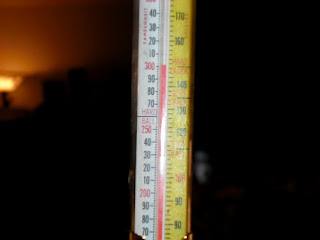 Remove from the heat and pour the candy into the prepared pan... Spreading it to the edges with your wooden spoon. 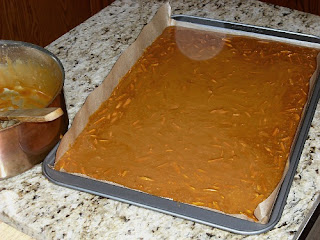 Allow it to cool and "set".
Meanwhile, scrap the pan and save those bits for yourself, cause you need to replenish your energy from all that stirring.  :) 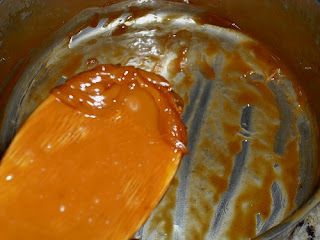 After about 20 minutes, you can score it if you like, but I prefer to just break it apart later. (it snaps fairly easily.  The chunks may be a little irregular, but that is part of the charm of homemade candy)
Once the toffee has cooled and set completely, melt 6 oz (170 g) of the chocolate. 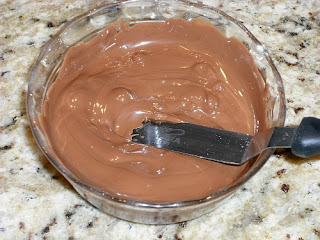 Pour onto the toffee slab and spread with an offset spatula until the entire side is covered. 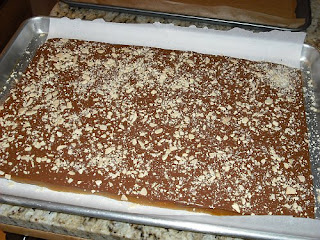 Allow to set, then flip the slab over and repeat... 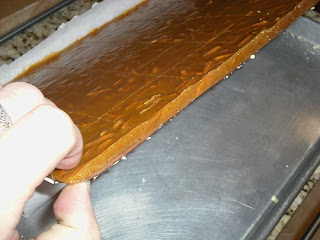 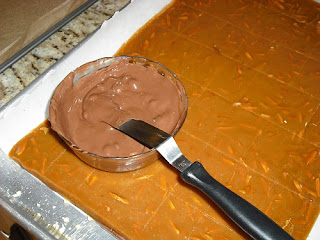 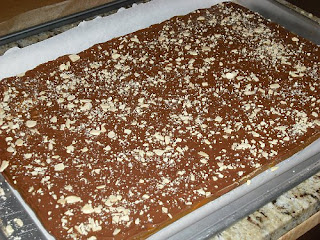 Once the second side has set, you can simply break the slab apart... And enjoy. 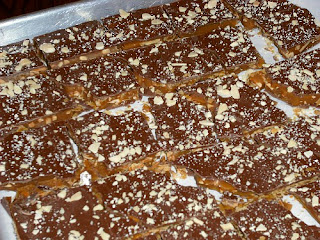 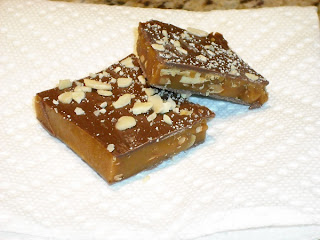 Gawd I luv this stuff! I have a go to recipe that is similar, but I gotta ask the reason for the cream of tartar or vinegar? same reason as the bs in brittle?

Oh shoot! I forgot to mention that in the post. The concept is similar to brittle but the result is slightly different. When you add an acid to a sucrose syrup, it causes the sucrose to "invert" or break apart into Glucose and Fructose. This helps to prevent crystallization, since your ending syrup is an now a combination of Glucose, Fructose and some remaining Sucrose. The molecules interfere with each other's ability to crystallize. Add in all that butter and you end up with a more amorphous candy with very few crystals.

In brittle, however, the acid is added at the beginning not only to invert the syrup, but to provide a reaction with the baking soda at the end of cooking to produce CO2 and further lighten the candy when poured.

Shane, you lost me in the explanation, whew! I sure wish I would have had this recipe when my MIL was still around, this was her favorite candy. If I have enough almonds at home, I just may have to make this for our Christmas eve family get together.

Sorry Patti, I have a tendency to completely "geek out" on the science part.. :) But if you give this a try, please let me know how it comes out.

Thanks Shane. And Patti don't feel bad, I only understand the crystal stuff from watching Alton Brown's fudge episode LOL

I love this recipe. It is the same as my Grandma's but I had lost the instruction portion. So Thanks you so much for having those in the post!!