They Call Me Mellow Yellow - Limoncello the Beginning

Most of the worlds most popular Liqueurs come from Italy... Frangelico, Amaretto di Saronna, Galliano, Nocello, Sambuca, Tuaca, Strega, Campari, Aperol, Fernet, Gran Gala, Cynar and even the somewhat now obscure Maraschino, which is pronounced "mar-a-SKEE-no" not mar-a-SHEE-no, the later being a nasty lye-bleached cherry that is then over-dyed and injected with artificial flavoring in an attempt to duplicate the flavor of the Marasca Cherry that the liqueur is made from... Yeah, they sure missed on THAT one, they taste absolutely NOTHING like one another.
And once again, I am getting off topic...

Limoncello has been rising up the ranks of this above list of greats. It came to the attention of the general population in the movie "Under the Tuscan Sun" when Marcello is attempting to explain to Francis how his family makes it. I was intrigued, I love lemon; lemon ANYTHING. I am the original Sour-puss! Why had I not heard of this before??? I immediately went on a hunt... No liquor stores seemed to carry it. Half of them didn't even know what I was talking about.

Finally 6 months later, I saw a bottle at Trader Joe's and bought it... Tasted it and was in love. Now I see it all over the place... Several different brands actually. After doing a little research, I began to realize that Limoncello is kind of like Tomato sauce... Every family has their own recipe and they are numerous and varied.

The subject came up on BakeSpace and with some advice from Dajana, I decided to give it a whirl... It's been awhile since I have done an experiment. I think it's LONG overdue. Sadly, California does not allow 95.5% grain alcohol to be sold within the border, so I was stuck with 75.5% or 151 proof. Thank goodness Bacardi 151 falls within the proof limit, if I could not make Spanish Coffee, THAT would be truly sad indeed. I made a futile search for Sorrento Lemons, for that is what traditional Limoncello is made from, but I was greeted by nothing but Eureka Lemons... Then, at Trader Joe's (Can you tell I really like that grocery store?) I found some more Meyers Lemons (they had been out, and the season is very short)...

That clinched it, if I could not have the traditional ingredients, then I was gonna go ahead and take it to the next level. Meyer Lemon Limoncello... with Cardamom.. Yeah, that's right... Not much, just a little, to give it an exotic "Something More".

This is what I finally came up with after a lot of internet research through myriad recipes... Meyer Lemons are Sweeter than Eurekas, being crossed with Mandarin oranges. So sugar content had to be adjusted accordingly... The skins are thinner too , meaning more skins are necessary to achieve a proper infusion of oils. I also, somewhat, adjusted for the Everclear containing more water, thus the extra 175ml added from a pint to give me the right amount of alcohol for infusing as I would have gotten with a 95.5% bottle (or at least close, it's actually a little less)...


Limoncello - In The Beginning 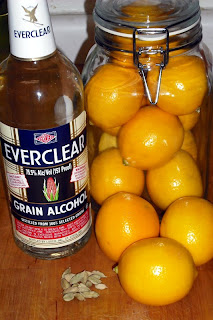 Later, You will Need:
Granulated Sugar
2-3 cups Distilled Water
But that will be another post.......

Using a sharp paring knife or a vegetable peeler; Remove the zest from the lemon. 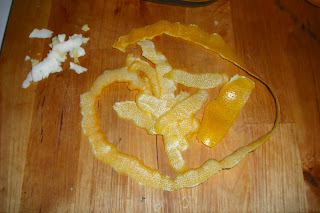 The skins on Meyer Lemons are REALLY thin, so you will probably end up with pith, no matter how careful you are. 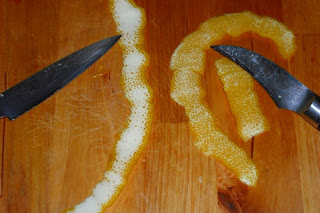 Simply scrape with your knife to remove as much as possible. 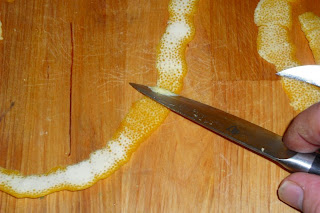 Place the zest in your jar of Everclear as you complete each lemon, to prevent the zest from drying out.

When all you lemons are zested toss in your cardamom pods. (Let the alcohol work for you, don't bother splitting them and removing the seeds) 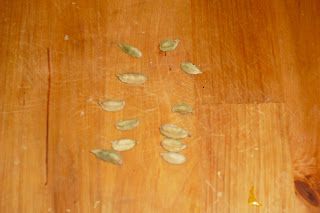 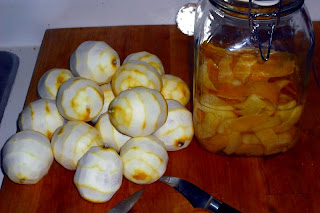 What do I do with all the denuded lemons?

Squeeze out the juice, filter out the seeds and store in ice cube trays. In this case I had 2 cups of Lemon Juice, so I divided it into 32 Tablespoons of juice. 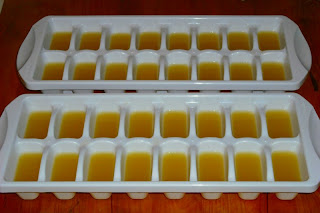 Check back with me for an update in 15 days as I check on it's progress.
The Limoncello that is, the lemon juice will be frozen by morning... LOL

Cin, Cin!!!
~~
Update: The limoncello has been completed and can be seen here -- Chillin With the 'Cello

Nice. Can't wait to see how it goes.

Can't wait to hear how it turns out.

Boy, ur fast! get 'er done, huh? I'll have to wait to conjur some up, our lemons here look like crap right now. I hope I didn't miss the boat!

Hello! I found this blog in Foodista and followed it here. This is a lovely blog and awesome Limoncello recipe. And they say alchemy started in kitchen. lol By the way you can place more Foodista widget in your past and future blogs so that other Foodista readers can follow and see your blog too. Just search for a related recipe or food in Foodista and use its widget. I hope to read more from you. Cheers!