This has got to be the most decadent pizza I have ever made. Also the most bizarre. It was inspired by the Smoked Salmon pizza created by Wolfgang Puck. It would make a fantastic appetizer, but I ate the whole thing and am now suffering from the dreaded "Pizza Coma" due to it's richness.

As usual this is not really a recipe, all things are to taste.

I was originally going to use Japanese Wasabi Caviar but, much to my chagrin, it had vacated my refrigerator. Evidently I had disposed of it at some point and forgotten about it. This left me with the lumpfish caviar I had picked up at IKEA a couple weeks ago for a whopping $2.59. 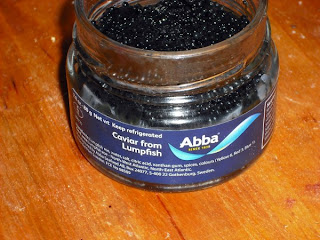 I also used Lox instead of Smoked Salmon and Leeks instead of Red Onion. The end result was kind of an Italian-esque Bagel & Lox... Mighty Tasty! 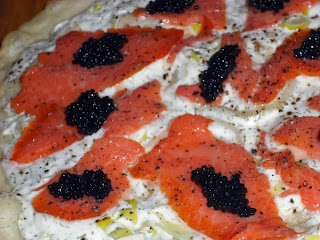 Still very simple really.....
Roll out your dough, brush with olive oil and lay down some leek rings and par-bake the crust for 4-5 minutes. 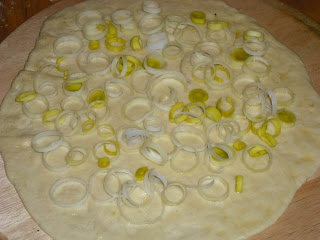 In the meantime per pizza you will need to mix 3TB Crème Fraîche with 1 TB Mascarpone, adding dill to taste and maybe even a little fresh lemon zest. (but I was out of lemons) 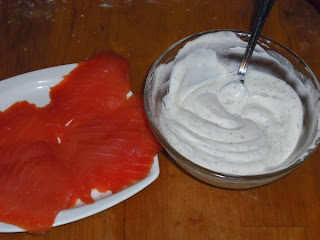 Remove from the oven and use a knife to puncture any bubbles in the crust. 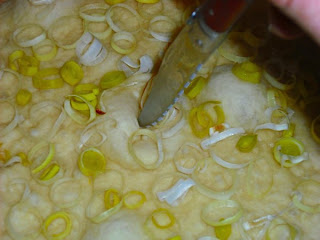 Spread the Cream mixture over the leeks then lay down the Salmon (I wish it had been sliced a little thinner) and hit it with cracked black pepper. 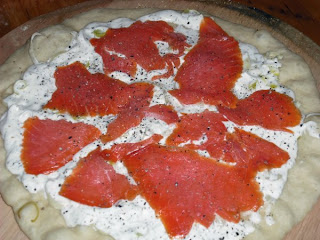 Return to the pizza stone for 4 more minutes
Remove and top with little dollops of caviar. (I still think Wasabi Caviar would have been better)
As always, the best part... 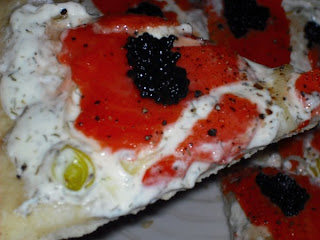 I know I would never make this, but I'm dying to taste it! Can I come over?