I've Got a Lovely Bunch of Coconut

Well, I really only have one, but by the time I get done 'processing' it, it will be plenty....

Have you ever wondered where coconut comes from, aside from the blue bag. ;) This is my meager attempt at step by step instructions for processing your own Coconut, so we no longer have to depend on "Baker's" (which is sweetened) or, more recently, "Mounds" coconut (which is also sweetened)....

Which I don't fully understand, cause coconut is sweet enough already (just like me - har har ) and really doesn't need any added sugar. 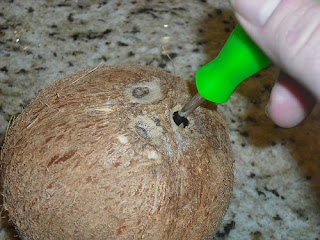 Drain out all that delicious coconut water and save it. (You can even freeze it) 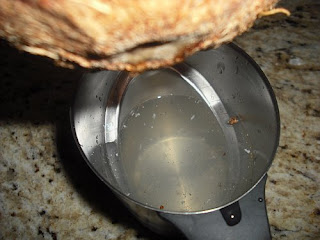 I drained out over 1 cup of juice from my coconut. (that's a lot, in coconut terms, considering it wasn't that big) Still had plenty of meat in it though. 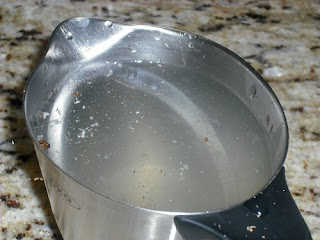 I strained it and gave it to my dad (cause he LOVES coconut water) It's an extremely nutritious and refreshing drink. 1 cup of coconut water contains more potassium than a banana and more electrolytes than those nasty high-fructose corn syrup ridden "Sports" drinks. 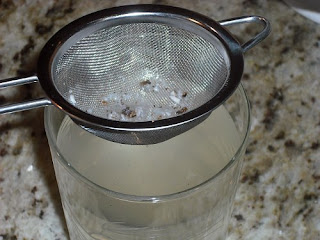 Wrap coconut in a kitchen towel, and place in oven for 20 minutes. 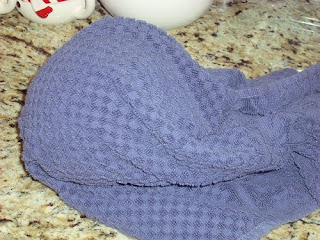 Remove from oven, and place on a work surface until cool enough to handle.
Reduce oven to 225° because you are going to want to dry some of the resulting coconut shavings.
Hold the coconut in your hand, and tap with a hammer, around the middle, until it cracks in a line all around the middle; separate into halves. 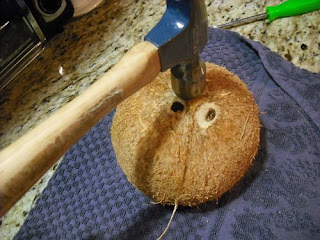 The white flesh should be slightly pulling away from the hard shell. 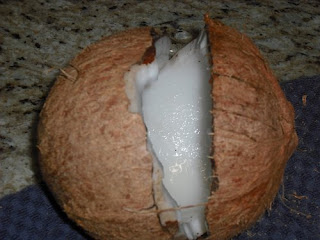 Separate it, keeping pieces of coconut as large as possible. (I had a whole half separate and pop out of the shell this time, the other half came out in 3 pieces)

(I use a pie server to slip into the space where the meat separated; use a side to side twisting motion to "pop" the meat completely free of the shell) 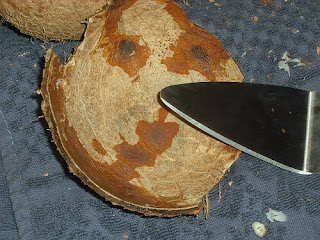 Using a vegetable peeler, shave the largest pieces of coconut into long curls, 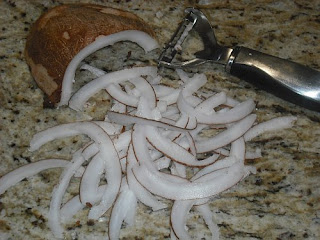 Place on a baking sheet and move to the oven for 15 to 20 minutes, until just dry. 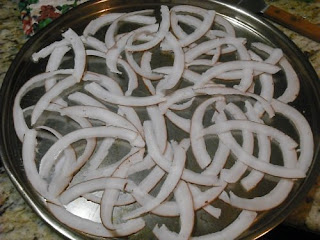 Grate the smaller pieces on the small holes of a box grater. 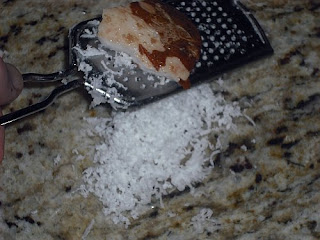 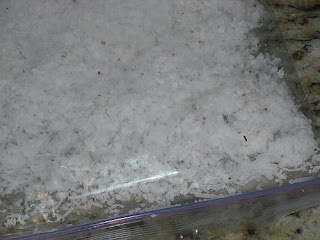 Place any remaining coconut that you do not wish to process right now, in a freezer bag and store in the refrigerator for up to 1 week. 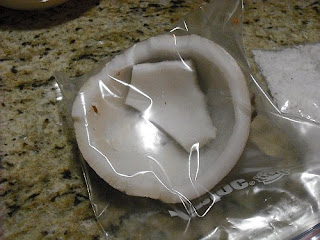 Let the shaved coconut cool after removing from the oven and place in a Zip-Loc baggie as well. (this will be for decor purposes) 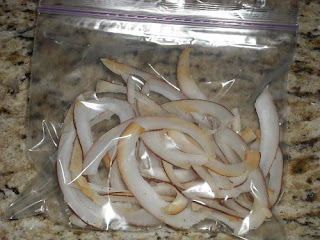 MMmmmm thinking of all the wonderful things you might concoct with the coconut. I haven't bought a coconut in a long time. I am wondering if the stores around here even carry them, hmmmmmm.

Holy cow, er uhm, I mean coconut! If I ever get stranded on a desert island, I sure hope I'm with YOU! LOL Can't wait to see what's up your sleeve ;)

Mmmm, coconut. I love fresh coconut. Do you know if you can freeze it? I don't use it much since my girlfriend doesn't care for it, but I would love to do this.

Cocco fresco, cocco bello!
You can hear it all summer on every Italian beach, there's always someone selling it.
I've never tried cutting it myself, always thought of it as something too hard to do.

Shane you are such a tease! I agree with ddpie, can't wait to see what you have going on here.

So what are your plans now for your lovely coconut shavings? Sugar cake coconut sweetbread, coconut bake ...now I think I'm hungry:-)