When I was a youth, the Henry Wienhard Brewery was in the downtown area, near Powell's bookstore. Sadly the brewery is closed now and someone else actually brews the beer under the name. I believe it's now owned by Miller Brewing Company, though they have contracted with the Full Sail Brewery in Hood River to actually brew it. Then again it's probably Anheuser-Busch for all I know. The point that I am meandering too is that when I was but a wee pup, their commercials were always hilarious.

One, in particular, was the group of cowboys sitting around the campfire. The cook had just received a shipment of this famed "Private Reserve" brew and in order to showcase the "Special" beer, he enters the circle of fire light and states, "Tonight, we have a few things not on our regular menu. We will be serving a Brook Trout Almondine with a light cream sauce......" blah blah blah.

For some reason, that commercial has been stuck in my head.... Since I was about 10.... I had no idea what the heck "almondine" was back then, but having been thoroughly brainwashed by commercials as a child, I was SURE that it MUST be something pretty spectacular if the cook wasn't just serving baked beans or chili for dinner.... right?

Well, I just got back from a long fishing trip at the Snake River (near Oxbow dam). And while I do not have any Henry Winehard's Private Reserve lager, I do have some trout.... Sooooooooooo, I decided it was time for this dish to make it into my normal repertoire. Afterall, when I found out that it was simply a pan fried fish covered in almonds with a browned butter/lemon sauce... Well, let's just say that I was "hooked" when I read about the browned butter. 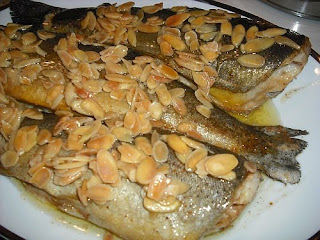 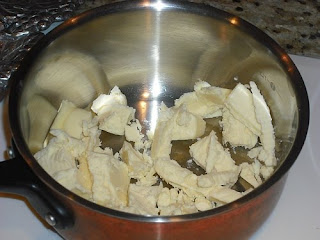 Allow the butter to "boil" to remove the water..... 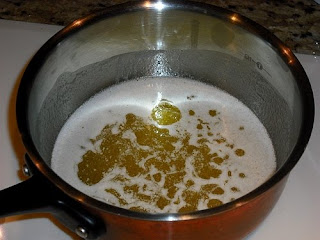 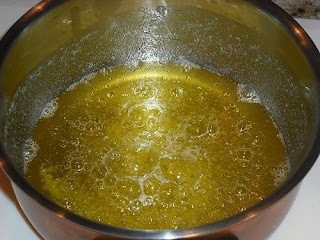 Watch the butter very carefully, once it begins to turn a light brown color it is finished. 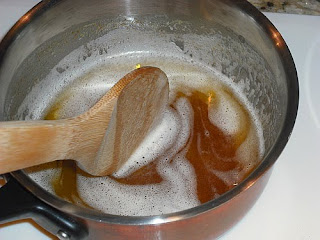 Strain through a fine sieve or cheesecloth to remove all the browned protein bits. 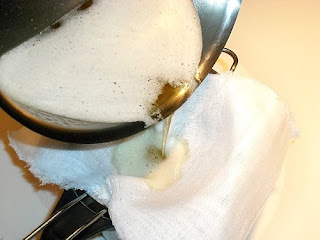 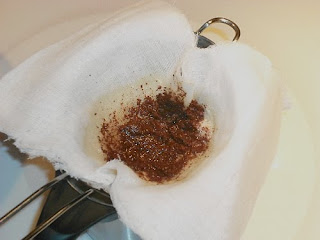 Wipe the saucepan with a paper towel. 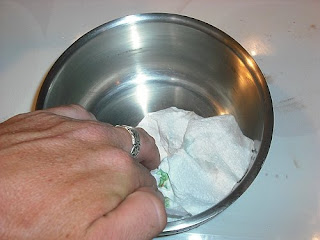 Pour the Beurre Noisette back in the pan... 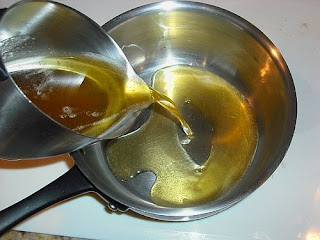 and add the almonds. 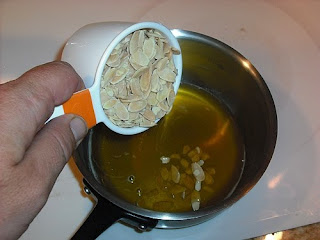 Stir to coat the almonds.... 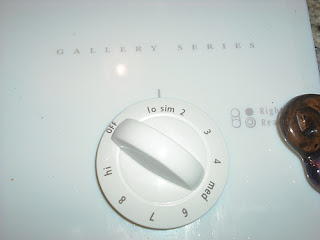 OK, now for the trout.... Hopefully your trout is already cleaned.... 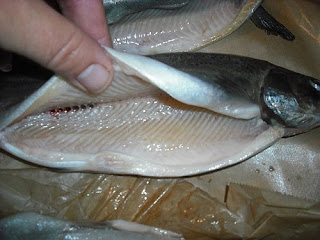 Now, you need to decide whether or not you are going to decapitate your fish.... Personally, I don't want them "looking" at me from the plate... Seems a little macabre. So.... OFF with their heads!!! 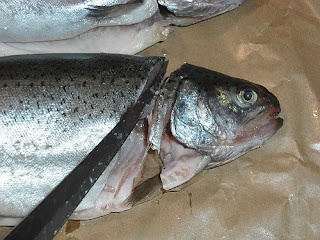 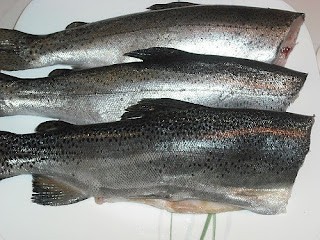 Place the remaining 2.5 oz (75 g) of butter in a skillet and place over medium heat. 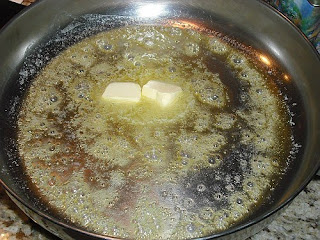 Pat the Trout dry with a paper towel. 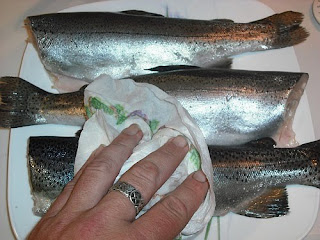 Lightly dust the trout (skin on) with seasoned flour. (be sure to knock off the excess flour) 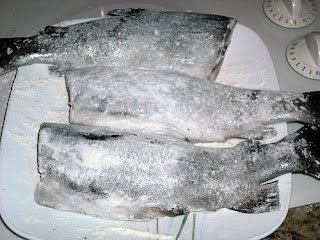 Place in the hot butter and pan fry for about 6-8 minutes, (depending on how big your trout are) 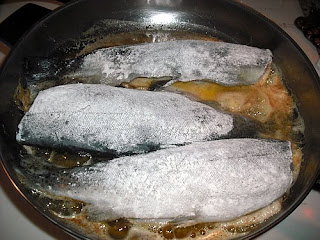 Turn the fish and fry an additional 6-8 minutes. (Until Flaky) 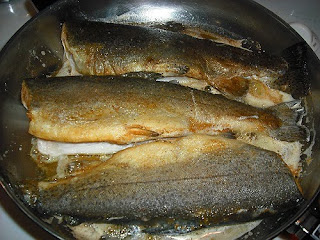 Add the Lemon Juice to the Beurre Noisette. 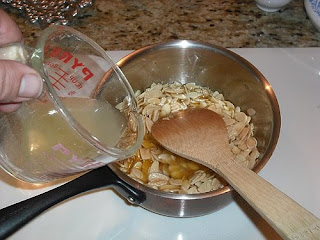 Arrange the fish on a warm plate.... 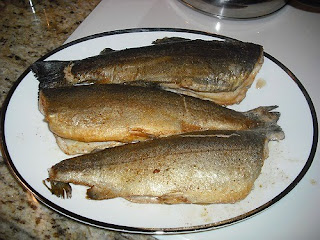 Spoon almonds over the fish. 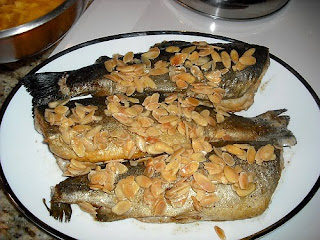 Pour the Beurre Noisette/Lemon sauce over the top. (See... WAY too many almonds) 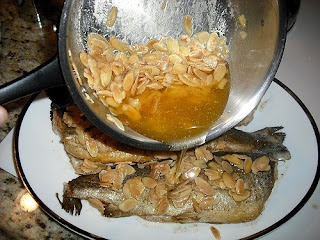 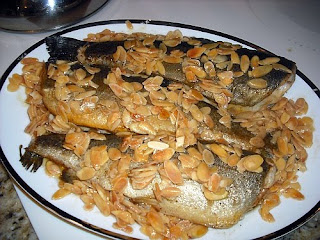 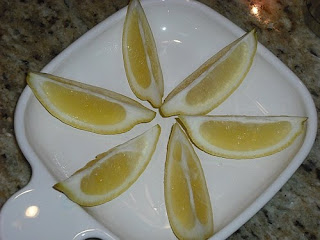 Pair it with a delicious Semillon...... 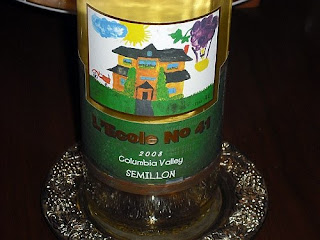 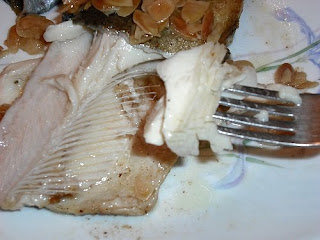 Now I fully understand why the chuck wagon cook was serving it. LOL Genius, pure genius.

Back in the day, when I used to cook what ever my hubby brought back whatever he had hunted or fished I made trout almondine for him. He was not impressed?! Sadly around here there are so many warnings about contaminated fish he always catches and releases.

Oh man, you just put a bit smile on my face! Love that you craved this for what...30-ish years!? Rainbow Trout with brown butter, almonds (or pecans) and fried sage is one of my FAVORITE meals...this reminds of that. Delicious =)

Now doesn't this look fancy, and utterly delicious! If I was at a friend's house for dinner and they presented this on the table, I would stand and applaud. Great job!