Hey all. Sorry I have been gone for so long. It's just been a little crazy round here since the fishing trip ended a week ago. To top it all off, I lost by camera battery charger somewhere between Copperfield at Oxbow dam and home. (sigh) But the good news is that the one I had to ordered has arrived, so I have finally been able to charge the battery and retrieve the photos from my camera.... So I can bring you interesting shots like Bucky Beaver here, 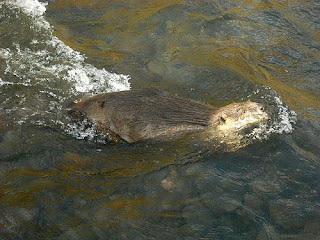 who decided to visit us one morning around 5am while we were trout fishing in the Snake river.... Calmly making his way up river, with only a momentary pause to wonder what the heck we were doing in his river. 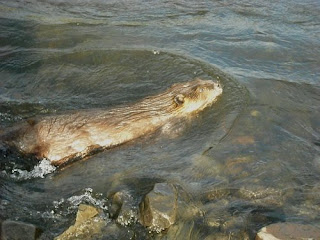 But before I regale you with fish tails (though I have an awesome recipe to share with you) I have some unfinished business that I didn't get to before the end of May. There just wasn't enough time to finish the post and edit all the pictures before heading east and with the camera charger fiasco upon returning, the whole thing was placed on the back burner.

I am speaking of the Bakespace Monthly Challenge. The month of May was to convert a recipe into a gluten-free recipe. Sadly, I was unsuccessful... That is putting it mildly. I would call my attempts colossal failures.

I deemed it necessary to attempt a decent shortbread recipe, sans flours containing gluten. This left out Oat flour, Wheat flour (of course), Triticale, Rye, Spelt, Kamut and any of the other myriad "go to" flours that I usually have lying around in the freezer (for they will all go rancid fairly quickly) Luckily, I still had a few options... White Rice Flour (for breading), Garbanzo flour (for cheating at Hummus), Tapioca Flour (a sauce thickener), and Corn Flour (which I use in Corn Biscuits) I also had Coconut Flour, Buckwheat Flour and Chestnut Flour.... But I would only use those for a "Flavored" shortbread.... Since they have a VERY distinctive taste.

The only thing I had to purchase that was not part of my normal repertoire was Xanthan Gum (which is indeed a little spendy) Luckily, I was able to find it in the supplement aisle of the health food store, where it came in a smaller quantity than I would have been required to purchase from Bob's Red Mill. After all, I would rather spend 5 bucks for a 10 year supply than 15 bucks for a 25 year supply of the stuff. Especially since I am not planning on making a career out of Gluten-Free baking.

The first recipe I played with was a combination of Corn Flour, Rice Flour and Xanthan gum...

After 4 attempts and altering the proportions of rice flour each time, I have come to the conclusion that ANY amount of corn flour in anything not only gives it a gritty mouth feel, but makes it taste like a corn biscuit. And while I truly love corn biscuits with my chili, I do not so much care for them when they are trying to impersonate shortbread. 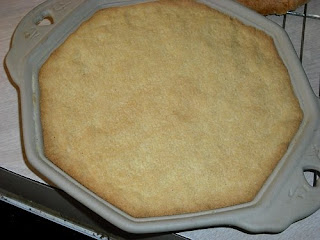 Back to the drawing board. Maybe I just take shortbread too seriously. hmmmmm. ;)

For the second formulation experiment, I decided to retain the Rice flour, but use the Garbanzo and Tapioca flours. This time I only experimented 3 times before I had to leave for the Snake river trip on the 26th. Below is the 3rd recipe I tried.

It had perfect color when removed from the oven. 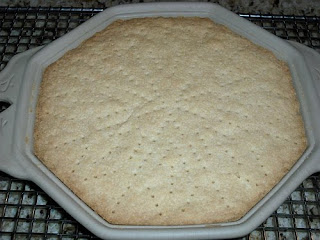 It un-molded beautifully as well; 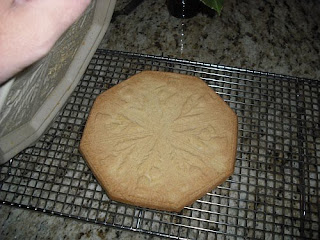 It was easy to cut and showed great promise. 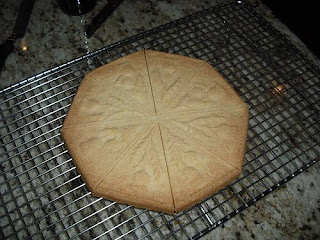 The texture was good, though not perfect, but it was the closest I had come at this point. The only real issue was that it tasted like sweetened Hummus. Oh, you didn't notice it so much upon the first bite; or even the second bite for that matter. But as you made your way through, what should have been a little slice of heaven, this almost insidious flavor began to build on your tongue, until at the end you were wishing for some flat bread, a slab of Feta and some Retsina.

My personal opinion? I don't know if shortbread can be made without actual WHEAT flour. The primary flavor of shortbread (unless you add flavoring) is the butter. Most of the other "Mild" flours that I attempted to use have there own distinct taste that overpowers the butter's flavor. You can get really close to the texture, but for me, it really isn't shortbread.

On a happy note, though I have not tried it personally, Bob's Red Mill DOES make a Shortbread Cookie mix that has all sorts of interesting stuff like Whole Grain Sorghum and Potato Starch flour in it. You are required to add your own butter and an egg yolk, but for all intensive purposes, I think if I have to make Gluten-Free shortbread for anyone, I will simply be purchasing that the next time. LOL

The pictures of the beaver are simply adorable.
Welcome back!

Don't know what to say about shortbread, but I'm sorry you didn't manage to find a perfect formula. I haven't tried making any type of gluten free cookies. With cakes and muffins it worked quite well.

Thanks Dajana. Considering how the shortbread came out, I am glad I didn't attempt "pasta"... LOL

I also love the picture of the beaver. Who would have thought that YOU would have had trouble with this. Some attempts at gluten free recipes around here have been utterly disastrous also.

I'm not sure if anything gluten free is going to taste quite right. I used oat flour in my challenge recipe (saw it as an alternative on a gluten free site) but have since read all sorts of contradicting info about whether or not it can be used in gluten free baking. ugh. Well...your beaver pic is very sweet...and your shortbread looks good even if it doesn't taste right.