Ah Sherbet.  Childhood memories of fun in the sun and sticky fingers as my Orange Sherbet dripped off my cone and rolled languidly down the back of my hand regardless of my I attempts to consume it with great haste.  I loved Sherbet when I was a youngin'.  Even those "Dixie cups" that came with the flat wooden spoons, though I always wondered why they bothered with the vanilla ice cream; as far as I was concerned the whole thing should be orange sherbet.

Then I became a pre-teen, and my sour-puss gene kicked in.... Oh, I still loved sherbet, but Lime became my preference.  mmmmmmm Lime (though I always found the green color to be a little unsettling as it reminded me of Mint Chip and I hate the waxiness of frozen chocolate) Yes, Sherbet and I had a long and passionate relationship throughout my youth. But something happened toward the end of my impressionable teen years.  Sorbet hit the market.  The flavor was so intense, and the texture was so refreshingly icy...  I began my torrid affair with Lemon sorbet and left the Sherbet of my youth behind, deciding that it was for children and I must move on to a more mature frozen treat.

Being older now, and somewhat wiser, as well as a maker of Ice Cream, Gelato, & Sorbetto/Sorbet I have decided that the time has come to give Sherbet a second chance.

So what exactly is Sherbet in relation to all the frozen teats out there?  Well, in Turkey it's a chilled fruit drink known as serbet (which is where the terms Sorbet and Sorbetto come from).  This same fruity libation is also popular in other middle eastern countries and known by many names ie. in Persian it's known as Sharbat (on which the word Sherbet is based)  Incidentally, the correct pronunciation of the word is "shur-BET" not "shur-BERT"; where the extra "r" came from, I have no idea.  I grew up hearing and using that extra "r".  So, I checked in the freezer case of my nearest mega mart and sure enough, all the containers had "Sherbet" printed on them.

Even though Sherbet and Sorbet are rooted in the same drink, as a frozen treat they are slightly different.  At least they are different in the United States.  Unlike the term Sorbet, the use of the word Sherbet is regulated.  So even though "Sorbet" is usually a combination of Juice, Sugar and Water, it can technically be made of just about any thing as it falls into the "Italian Ice" category along with Sorbetto and Granita.  However, by definition, Sherbets MUST contain between 1 - 2% dairy.  This is the key that makes them different from the others.  Ice Cream, on the other hand, has a much higher percentage of dairy as it is based on cream and eggs.  Gelato is based on Milk, and sometimes eggs; thus it's fat content, while lower than ice cream is still higher than Sherbet. Sherbet's niche is in the middle ground, between the two extremes of Sorbet and Ice Cream.

This makes the texture of Sherbet different from Sorbet as well.  Sorbet is much more icy, and while sherbet is icy too, there is still a creamy quality too it, though not as creamy as Ice Cream or Gelato.  That little bit of extra fat in Sherbet changes the freezing temperature of the mixture and helps control the size of the ice crystals.  It has a more intense flavor than Ice Cream as well, because your palate is not overwhelmed with a coating of cold butterfat. Basically, it's the best of both worlds.

Thus, with a heavy heart and forever covered in shame, I regret turning my back on my childhood love.  I shall never take Sherbet for granted again.

In an attempt to make amends, I have decided to make a few alterations to Alton Brown's Orange Sherbet recipe and take it into realms beyond the simple flavors of Orange, Lime, Pineapple and Raspberry.....  Thus, I give you... 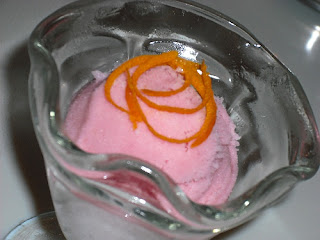 Cut the rhubarb into small cubes (you need as much surface area as possible) and place in a medium bowl. 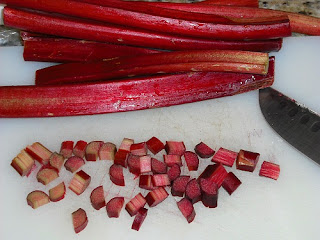 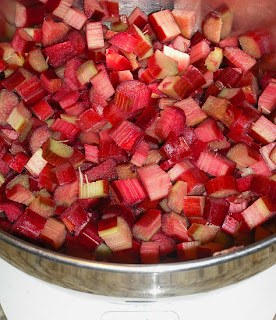 Sprinkle the sugar over the rhubarb and toss to coat. 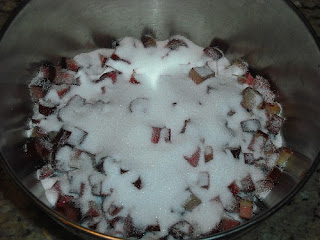 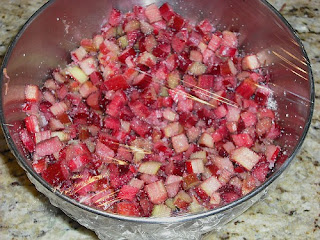 Once the rhubarb juices up, go ahead and strain it. If you don't have quite 2 cups, (and you probably won't) throw the drained rhubarb in the food processor and pulse a couple of times to break up the fibers in the rhubarb. 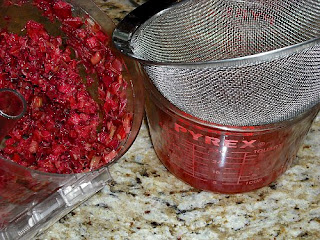 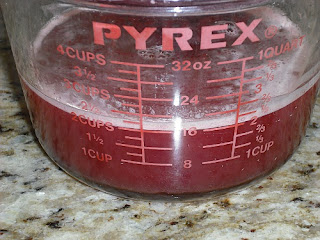 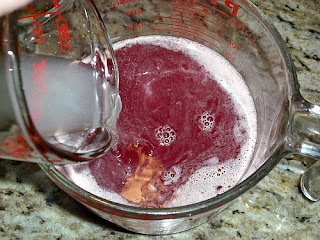 Add Milk and Half and Half, again, whisking to combine. 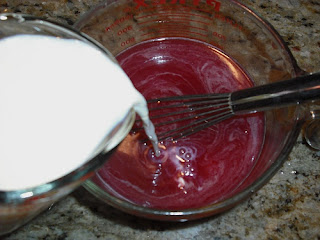 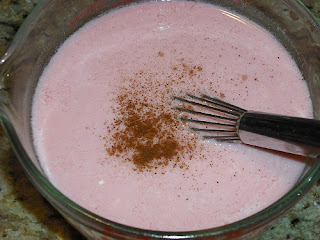 Cover the mix with plastic wrap and chill until cold before pouring into your ice cream maker and churning according to your maker's directions. 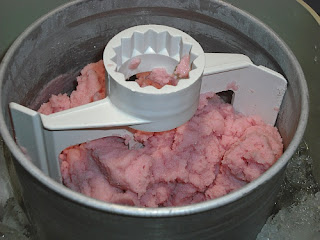 Spoon sherbet into a container and move to freezer for 4 hours. 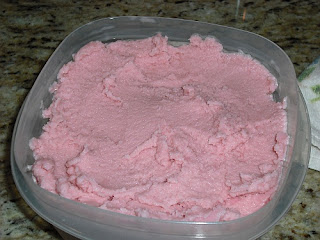 Serve simply, with zest of Orange and enjoy. 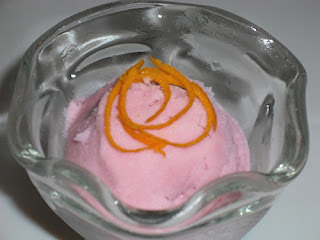 Huh, I hadn't known they were based on a drink. Interesting. And it look delicious!