Confounding Crustacean Conspiracy Causes Conundrum - What the Heck Am I Eating????

Jumbo Shrimp, Military Intelligence, Pretty Ugly and Deafening Silence.....
We are all familiar with these oxymora or oxymoron(s), from the Greek ‘oxy or oxus’ (sharp) and ‘moros’ (dull or foolish), ergo (which is Latin, not Greek) meaning “sharply blunt” or “pointedly foolish”, it’s a vicious cycle.

In the case of shrimp in particular, the above oxymoronic term is only the beginning of the confusion. We also have the term Prawn, used by the “shrimping” industry interchangeably with, well, shrimp, especially if the particular crustacean in question is of a larger size. (What is with the preoccupation with size? Sheesh!) It’s true that all shrimp and prawns are Arthropods, and all shrimp and prawns are Crustaceans. They are even both Decopods (10 legs), however shrimp are not prawns and prawns are not shrimp.

Decopoda is where the similarities end for they are divided into 2 different sub-orders due to their gill design. Prawns are in Dendrobranchiata (Branch Gilled) where as shrimp are in Pleocyemata along with Crabs, Lobsters and Crayfish (which is really a fresh water lobster). True shrimp are then further classified into the infra-order of Caridea. I apologize for the Biology lesson but let me continue...

A perfect example of the puzzlement created by the “prawning” industry (take that!) is the Black Tiger Shrimp (Penaeus Monodon) and the much larger Tiger Prawn (Penaeus Monodon) both of which are delicious on a bed of spinach and smothered in cilantro-lime butter and a feast for the eyes hanging off the rim of a martini glass filled with cocktail sauce. Thus proving that prawns are just as tasty as shrimp, for the Black Tiger “shrimp” is actually the largest species of Prawn (not a shrimp) in the world, capable of reaching 14 inches (36 cm) when not harvest while still shrimpy, or is that wimpy? Talk about colossal!

Incidentally, as if all this prawn/shrimp nonsense wasn’t enough we have the even more bewildering Shrimp Scampi of American-Italian restaurant fame. Scampi is the plural of Scampo, being Italian for the small (9 inch) Norway Lobster (Nephrops norvegics). Also known in French as the Langoustine (Does this sound familiar?) and even more perplexing, as the "Dublin Bay Prawn". It is official, not only does “Prawn” mean large, jumbo or colossal shrimp as well as, well, Prawn (unless said prawn is small, at which point it must be referred to as shrimp), but also small (shrimpy?) lobster.

In the U.S., restaurateurs (no ‘n’) use scampi to denote “shrimp”, or in some cases small prawns, but very rarely do they mean actual Scampi. This makes their menu look more authentically “Italian”, I guess. Gamberetto, Granchiolino, and Gambero, which are perfectly serviceable Italian words meaning “shrimp” or “prawn”, must all look and sound too Spanish or something. To further obscure the term, Scampi is also used as a proper name for the popular dish of shrimp, or prawns, in garlic butter and white wine which was called Langostino in the 70s and early 80s and served in just about every steak house in the country. This "dish" is made with Scampi (Norway Lobster) in Italy, not shrimp, and I have my suspicions that disco era “Langostino” was made with crayfish (fresh water lobster). All this makes “scampi” appear to be a specific preparation resulting in such dishes as “Shrimp Scampi” which while not an oxymoron, is “moros”ly redundant like PIN number (Personal Identification Number Number) and ATM Machine (Automated Teller Machine Machine).

But Wait! Were not done yet. This gets even better… I mentioned the French Langoustine, well… Langostino, in Spanish and Italian, doesn't mean "Norway Lobster" (which IS a Lobster, as is Rock Lobster) it means "Squat Lobster", being neither Lobster, Shrimp, Prawn, Crab nor Salt Water Crayfish (Yes, they exist). Nope, most of the “Lobster” in restaurants (such as Rubio's "lobster" burrito), when it is bite sized, is made of the Langostino and I don’t mean the Dublin Bay Prawn/Scampo/Norway Lobster/Lobster/Langoustine. I mean the little Squat Lobster that is more closely related to Hermit Crabs, Porcelain Crabs and King Crab. (That’s right; King crab is not a “True” crab - but it sure is tasty). Why? Because it's about 1/3 the price of Maine Lobster and 1/2 the price of Rock Lobster.
Talk about skimpin' on the scampi!

In conclusion -
Shrimp and Prawn are forever confused and will never be sorted out. (There are just too many shrimpy Prawns and brawny Shrimp out there.)
Rock Lobster - Though a "Spiny" Lobster, it is still a Lobster
Norway Lobster - Real Lobster, just small (AKA: Langoustine, Dublin Bay Prawn, Scampo)
Maine Lobster - Real, of course
Langostino - Squat lobster - Hermit crab relative that kind looks like a lobster, but not a Lobster
Scampi - Norway Lobsters in Italian - Not necessarily a preparation although the garlic butter is common. Only includes shrimp when restaurants are trying to confuse customers. (Take THAT Red Lobster!!! or should I say Red Langostino?)
King Crab - Related to Hermit Crab and Langostino, not a true crab due to the asymmetry of the body
Dungenous & Snow Crab - True Crabs from the West Coast
Crayfish - (AKA: Crawdad) Closest Crustacean to a real Lobster, lives in both Salt and Fresh water (Who Knew?)

Now that I have completely confused everyone, including myself. I present a simple dinner, or at least what started as simple until I tried to find out what exactly a Langostino was... LOL

Pappardelle alla "Crustacean from the waters off Chile that may or may not be a Crayfish, Squat Lobster, Prawn, Shrimp, or Hermit Crab" in Meyer Lemon Cream 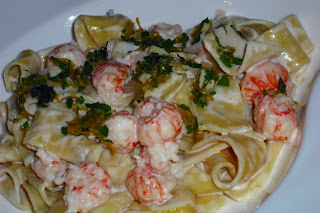 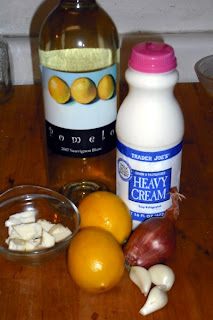 Cook the pasta according to package directions
In a skillet, heat olive oil, then add shallot and cook until translucent. 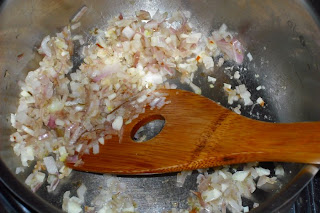 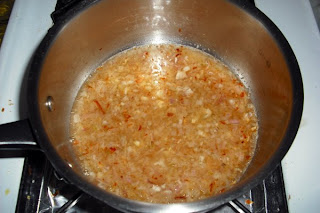 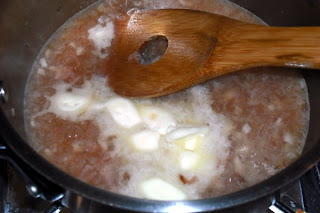 and cream; cook on low heat for flavors to meld, about 10 minutes. 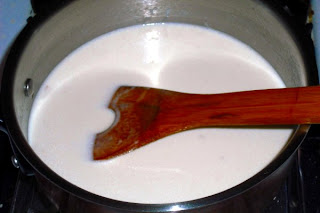 Remove from heat, cover and let rest another 10 minutes.
Return to low heat; add cooked Langostino and adjust seasoning with salt and pepper to taste. 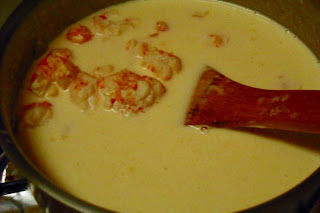 Toss with drained Pappardelle and serve with Gremolata (See Below). 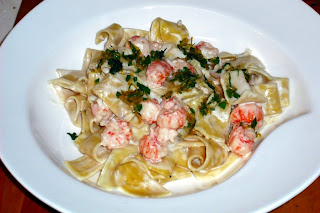 Add Parsley, Lemon Zest and Garlic to a bowl and drizzle with a touch of olive oil. 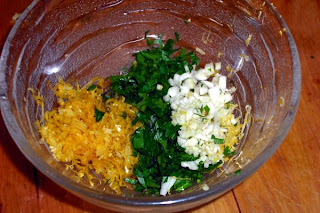 Toss and season with salt and pepper to taste. 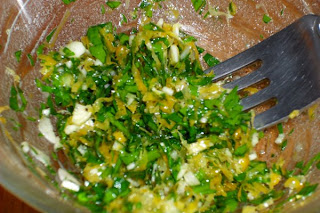 Hey I come here for great recipes and I get an education!

Do you charge extra for the background information?

I have no idea how you manage to do so many great posts so often, keep it up...

Well, I'm still not into shrimp, but the gremolata looks great!

Bob - Gremolata is so quick and easy. It's excellent on lots of dishes.. Especially Fish and Chicken

I think I'm more knowledgeable now... or maybe more confused... I'm not sure!

But I do know that dinner looks so tasty!