So originally, this evening, I had planned on Coconut Pecan Baked Chicken. Well, you know what they say about the best laid plans of Mice & Chickens. In the end I made Squash Soup again. This was partly due to the light snow fall that occurred this morning, soup was definitely the ticket. But being, in essence, a vegetable soup, it just wasn't going to be enough "Man Chow".

So, I rummaged through the refrigerator to take stock of what was contained therein. Then I pattered off to the pantry and poked my peepers in, to peruse the non-perishables. Luckily, I had some canned crab. I will tell you right now that this recipe is MUCH better with fresh Dungeness or King Crab, but the canned stuff will work in a pinch.

Though the ingredient list is simple as well as the prep work, the presentation is quite impressive. Thankfully, as impressive as it looks, even the assembly is fairly simple. Much to my chagrin, I was out of white pepper. It's only an aesthetic thing and I think you will see why as we go through the steps. It's a case of wanting pepper flavor, but not wanting to see it.

I am not gonna lie to ya, this really isn't "Man Chow" in any way, shape, or form. This is better served for afternoon tea or as a luncheon item. But it went REALLY well with the soup and it was very tasty, I just ate 2 of them... LOL 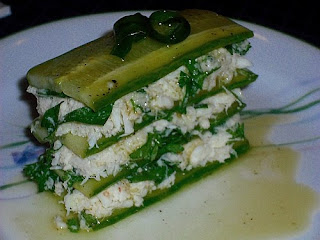 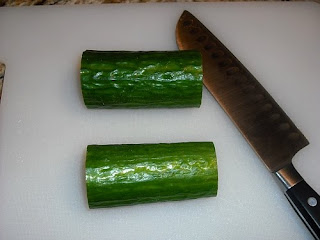 Carefully slice the cucumber into 1 mm slabs. (hopefully, this should yield 24 slabs) 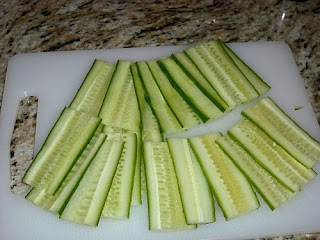 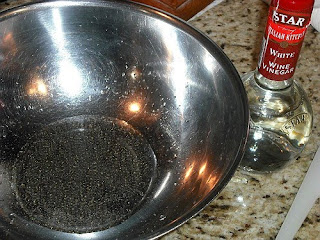 Add the cucumber slabs and marinate for 30 minutes; Turning them over occasionally. 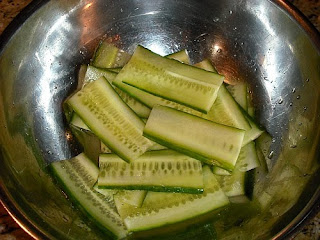 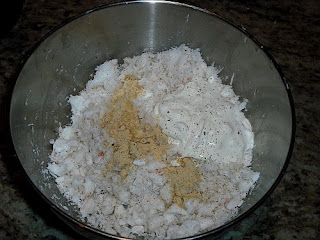 When homogeneous, add the chopped cilantro and mix together. 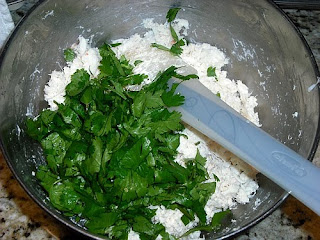 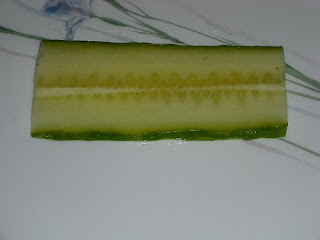 Spoon the crab mixture over the slab and smooth it out, keeping it in a rough rectangle shape to match the cucumber, then lay down another cucumber slab over the top and press lightly. 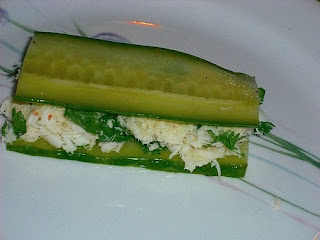 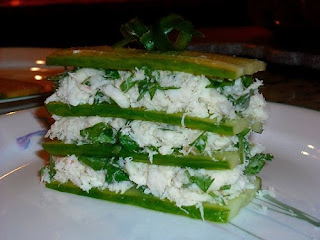 Garnish with a little cucumber skin curl and chill while you make the dressing.
Place Champagne vinegar, Salt, Extra Virgin Olive oil, and White pepper in a small bowl. 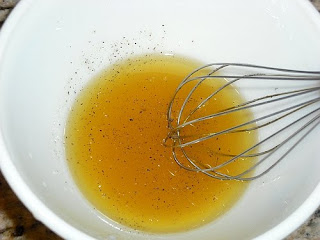 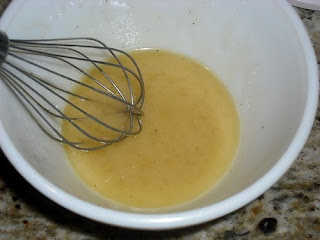 Drizzle it over the Napoleons.... 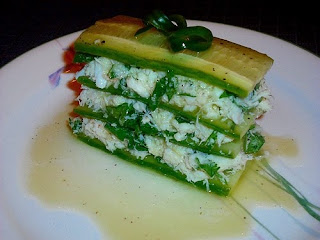 And serve, with Squash Soup, even though there are unsightly bits of black pepper all over everything... LOL

Ooooh, nicccccce. But I wouldn't have used black pepper...it shows up ROFLMAO Seriously tho, makes me long for a springtime lunch out on the sunny deck!

You have to be one of the most creative people I know. I could never peruse my pantry and come up with something like that!

Yeah, I'm with Patti. When I go through my non perishables that is not the kind of stuff I come up with! :D

Patti & Bob - I had help... I read too many cookbooks and things just stick in my head... LOL

This just stick in your head? maybe thats my problem...cuz things fall out, leaving random fragments behind and I have no clue what they mean! LOL. Beautiful stuff you have there...crab or not hahaha