OK, so last year, around St. Patrick's Day, I embarked upon the Guinness With a Floater of Bailey's Cake. (AKA: the Irish Car Bomb cake) Yeah, I know, the name is politically incorrect, but it is the name of a beer cocktail of Guinness with a shot of Bailey's Irish Cream dropped into it; similar to a "Flaming Dr. Pepper" which is a pilsner beer with a shot of Amaretto floated with Bacardi 151, which is then dropped into the beer, extinguishing the flames, at which point you chug the thing. (No, I do not have a cake recipe for this; but I AM working on a Crepes Flambé one...) ;)

Political unrest and drinks designed for the 21 to 25 age bracket aside, it has now become traditional for me to use this famed Stout, brewed since 1759, as an ingredient in some form of sweet treat to celebrate the holiday. After all, nothin is quite so delicious with Corned Beef and Cabbage (although that is Irish-American) than a good Guinness, even if you have to wait until dessert. 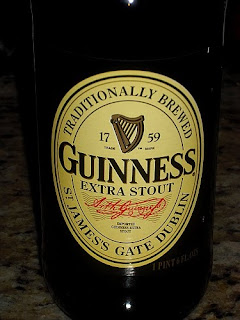 Luckily, I did not have to start from scratch on this ice cream. I mean, I know how to make ice cream. It's really not all that hard, well at least until it's frozen. HA HA HA

All ice cream is, is a frozen Crème Anglaise. Gelato gets a little more complicated since it's not based on Crème Anglaise and has no egg yolks to stabilize it. The original point was that there are 2 recipes floating around the net, possibly 3, although the third one looked alot like the first one. This gave me a starting point from which to make my, "Oh, so standard modifications" Cause I just can't leave well enough alone... ;)

This recipe leans heavily upon the one Emeril made back in 2002. With my own twists, of course. For starters, I noticed Emeril didn't use a double boiler for his "Anglaise" phase, this usually leads to an absolute necessity for straining through cheese cloth, cause their WILL be lumps. There will be lumps anyway, cause it's virtually impossible to weed ALL the egg white out, when separating eggs. But the Double Boiler (Bain Marie) method reduces this significantly.

Not being a fan of the overly sweet, I HAD to change the sugar content a little. Using a combination of Brown Sugar and Clover Honey (a little luck of the Irish?) seems a logical choice to reduce the sweetness a little and allow the more of the Guinness flavor to come through. These two ingredients also just felt like more of a "Natural" to pairing than a bunch of Granulated Sugar.

The final change I made was the reduction. Emeril simply boils the beer for 8 minutes to reduce 12 oz to 3 oz. I think I understand beer a little better than he does evidently. That is WAY too fast. Guinness is full of volatile flavor compounds that, if boiled, will be forever lost. A very low simmer is the key in this reduction. I ain't gonna lie to ya, the reduction is gonna take about 45 minutes to 1 hour, but it's well worth it. Full flavored without a "cooked" or burnt grain flavor. 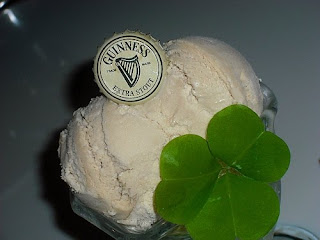 In a large saucepan, simmer the Guinness until reduced to 3 oz, about 45 minutes. 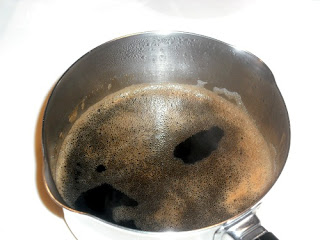 Pour reduction into a container and refrigerate. 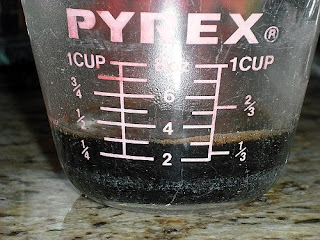 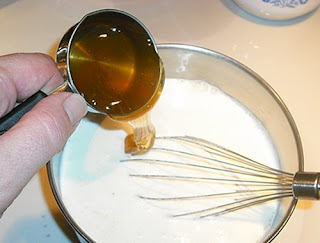 Bring to a just to a boil over medium flame; removing the mixture from the heat as soon as you see the first few bubbles. 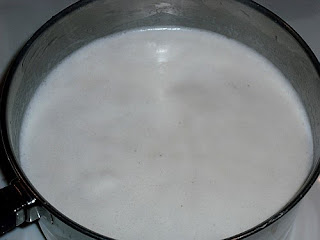 Begin heating a pot of water to a gentle boil. (for the double boiler) 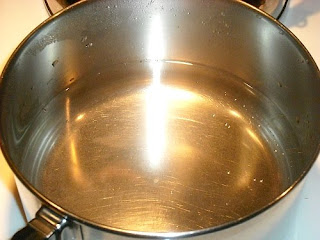 Beat the egg yolks in a medium heat proof bowl. 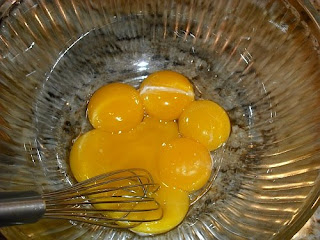 Whisk 1 cup of the hot cream into the egg yolks to condition them. 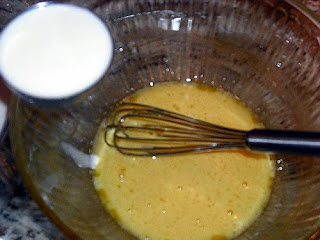 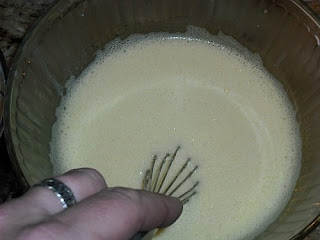 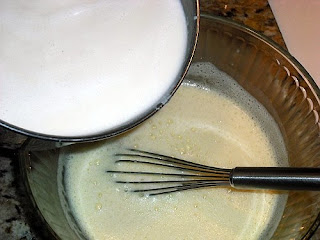 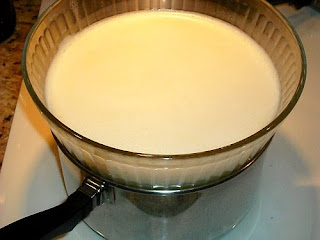 stirring occasionally, until the mixture thickens enough to coat the back of a spoon 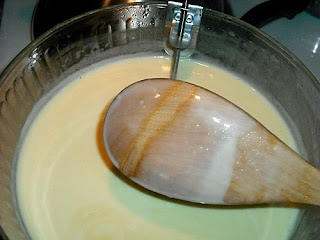 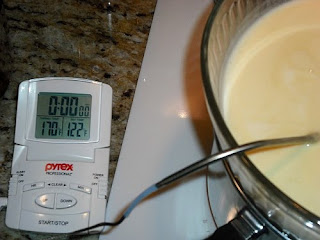 Remove from the heat and pour through a fine mesh strainer into a clean bowl. 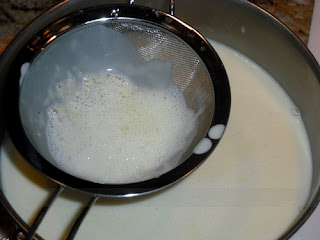 Cover with plastic wrap against the surface to prevent a skin from forming. 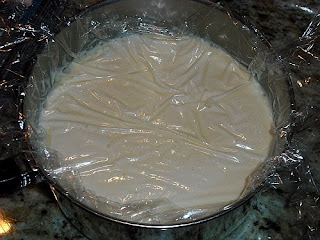 Chill in the refrigerator for at least 2 hours. (The colder this gets, the less churning is needed and the smoother your ice cream will be)
Remove from refrigerator and add the Guinness reduction, whisking until well blended. 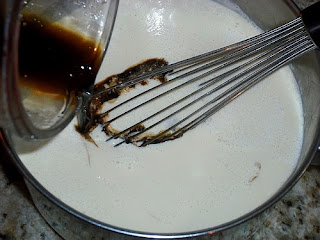 Pour into the bowl of an ice cream machine..... 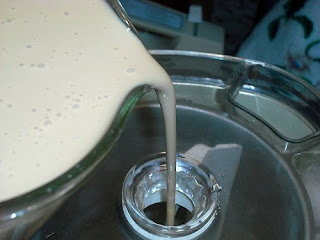 and freeze according to the manufacturer's instructions. (Yeah, the first picture sucks) 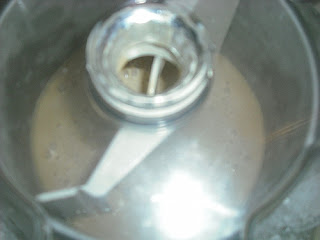 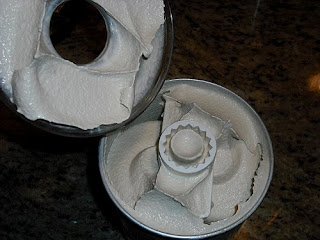 Transfer to an airtight container and freeze until ready to serve. 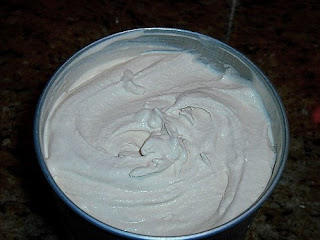 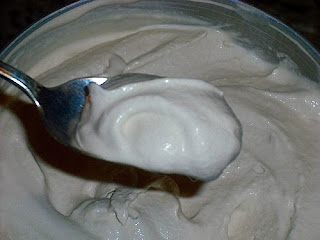 or behave yourself (though it was difficult) and once frozen, serve with a bottle cap.... 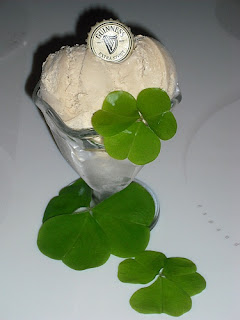 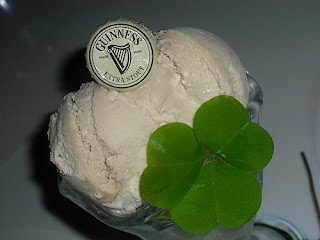 P.S. And as Luck would have it, this is my 300th post!!!! Wow, it seems like only yesterday I started this blog. I guess it's true what they say, "Time flies when your having fun" :)
Thank you all for being interested in my random ramblings as well as my reoccurring rants. LOL
Posted by Shane T. Wingerd at Friday, March 12, 2010

Guiness is a very popular ice-cream flavour in Trinidad which is strange cause there are no Irish here. I enjoyed comparing your recipe to the one I use.

Damn!..that looks killer Shane..I've had it before somewhere in Vegas (hazy memory)and your color is a dead on match to what I can remember..lol!..that nutty coffee toffee taste..

Heh, you say that the reduction takes so long like it's a bad thing. I bet it makes the kitchen smell wicked good, like beer potpourri.

Bo - Yeah, I was a little behind last year, so I thought I would jump ahead a little this time.. LOL

Bob - Yeah, it was total beer heaven for 2 hours after the reduction was finished... Nirvana, Man!

Shane, I will be dreaming tonight of a scoop of that with a slice of that beautiful cake you made before!! I can't believe it has been 300 posts, congratulations on all the wonderful recipes that you have brought to every one.