It all started when I decided to cook dinner for my youngest brother and his family, minus my niece who was at the beach with my parents. I was toying with the Macaroni alla Nawlens, that I made some time ago. When I mentioned Andouille floating in a sea of cheese and pasta, the idea was met with zeal. So it was decided... Penne alla Nawlens it was. This is when the problem started.

As I mentioned, I already made this recipe, or at least something along the same venue, a while back (Macaroni alla Nawlens), but I figured, in light of my recent successes without using béchamel as a base, that it was time to re-vamp the recipe a little.

When I started looking at the recipe it became glaringly apparent that I was off my "game". If memory serves me correctly, though I was attempting to recreate a recipe I had eaten at the New Orleans Cafe in old Town San Diego, I was in a hurry, I was hungry, and I was simply cleaning out the refrigerator of so many small pieces of cheese. Which would be fine, except for the fact that I blogged about it. I probably shouldn't have, as I had not entered into the project with any sort of definitive plan. (even an experiment needs a plan) I was simply making it up as I went along. And while it was tasty, I think it could be much better....

So I post this again, but THIS time, it is with a serious endeavor to create a Macaroni and Cheese dish that actually reflects the flavors of Cajun/Creole cuisine.

First, as I mentioned, the béchamel HAD to go. This is based on Heavy Cream, Butter, Crème Fraîche and Cheese (lots of Cheese). Secondly, I had to attempt atoning for my mistake; when I originally threw this together I committed a cardinal sin that shall haunt me to the end of my days (cause I knew better). I completely left out the "Holy Trinity". I have no idea what I was thinking, but the combination of Onion, Celery and Bell Pepper is quintessential to ANY Creole/Cajun dish. Sure, I had thrown in some onion, but that is a pale shadow of what is possible. Lastly, the cheese had to be addressed. So I sat and contemplated. I finally went with 1 firm cheese (Gruyere), 1 semi-firm cheese (Emmental), and 1 smooth melting cheese (Danish Fontina). A lot simpler, but more flavorful, than the train wreck of cheeses I used before. The funniest part is, that I actually used less cheese this time, but without the béchamel, it had SO much more cheese flavor. Awesome!

After all, if I am gonna cook for family, I SHOULD be putting my heart and soul into what I am doing. They're worth it. So without further nonsense babbling.... I present Macaroni alla Nawlens, the way I should have made it the first time. And I must admit, I was not disappointed at all, it was SO much better this time. 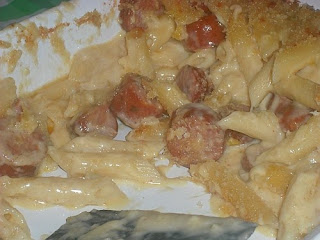 Slice up the andouille. (I use Aidelle's cause that was all I could find) 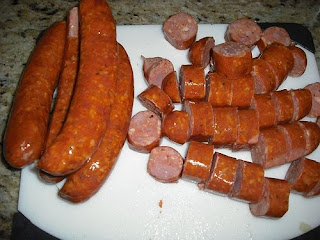 Set a large pot of water over high heat so it can come to a boil while you are grating all the cheeses so your ready. 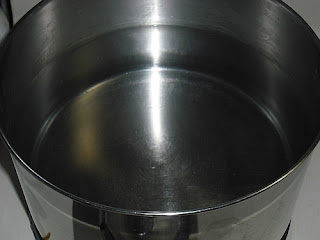 Once you have grated all the cheese, grab a handful from the pile and set it aside for later. 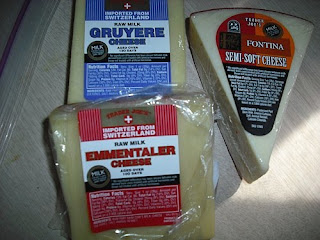 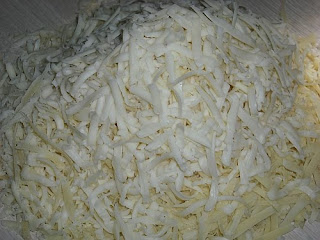 Place Heavy Cream and Butter in a small sauce pan, melting it over low heat. 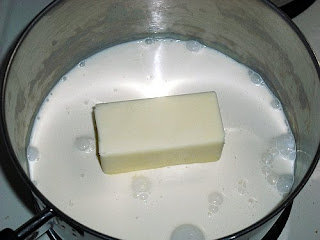 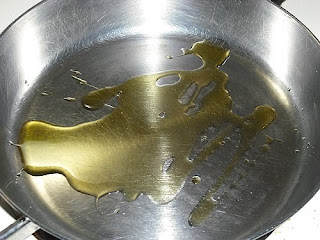 Add the andouille (in batches if necessary) and saute until lightly browned, but more importantly, until you have some of the fat rendered into the pan. (you're gonna need that for the next step) 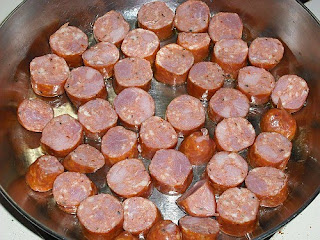 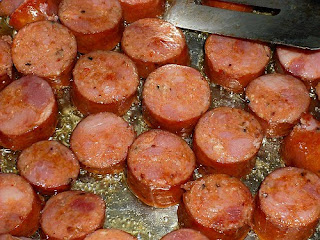 When you have fried all the andouille, set it aside. 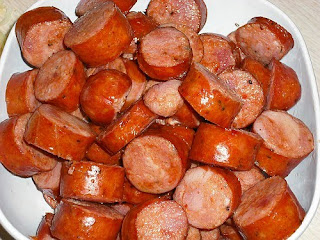 Add the "Holy Trinity" to the hot andouille fat, and saute until soft. 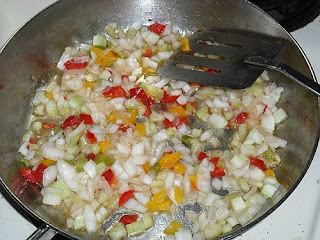 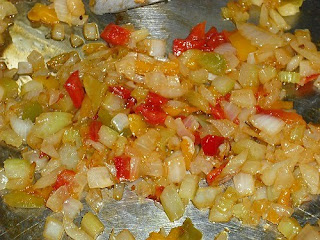 You should be able to drop your pasta now, boil for 1/2 the time called for on the package. 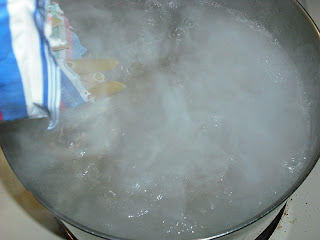 Begin preheating the oven to 325 degrees.

Once the Butter and Cream are melted and homogeneous, add a handful of the cheese mixture and whisk until melted and smooth before adding another handful. 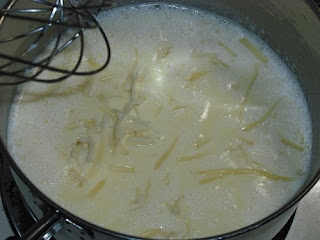 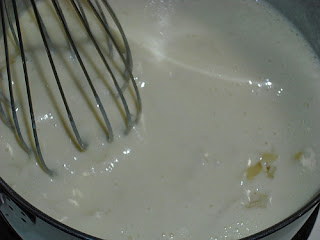 Add all but 1 handful of the shredded cheese. 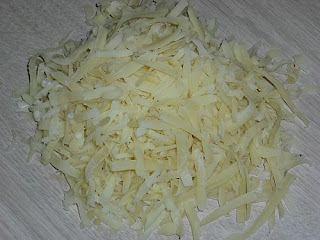 When all the cheese (except for the handful you set aside) has been added and is melted, add the Crème Fraîche and whisk again. (it will look a little runny) 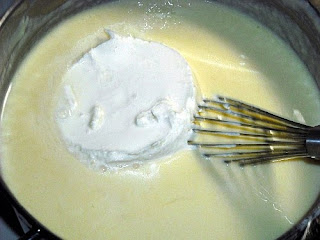 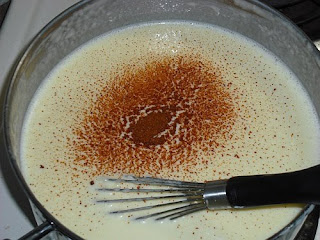 Drain the penne (don't forget to give it a really good shake to get the water out of the tubes) then pour the pasta back into the pot you boiled it in. 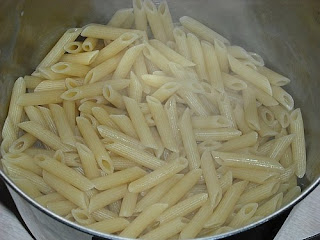 Add the Fried andouille and the Holy trinity. 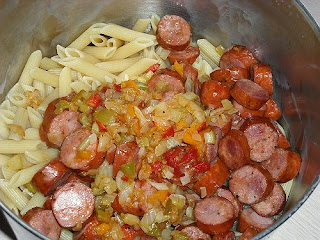 Pour the hot cheese sauce over the top. 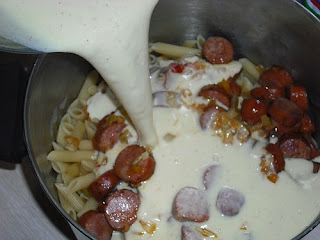 Then toss everything to coat it really well. 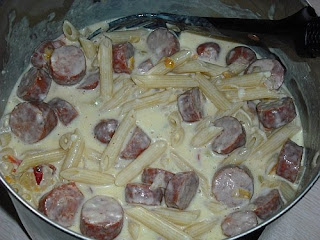 Add the reserved handful of cheese and stir it in. 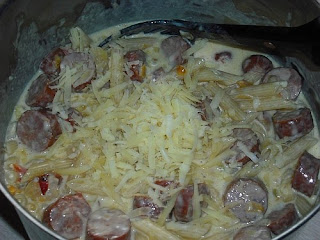 Immediately pour the mixture into an 9 x 13 casserole dish. (Hooray for old CorningWare!) 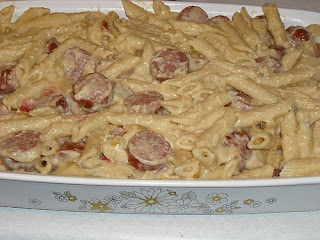 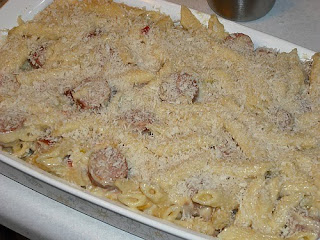 Bake for 15-20 minutes or until is begins to bubble. 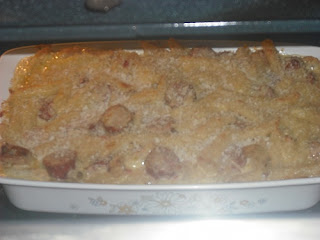 Switch on the broiler on and place under the element for 3 minutes to finish of the top crust. 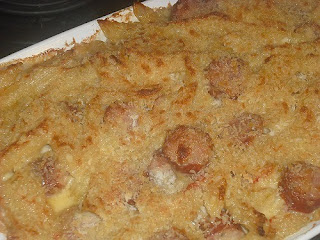 Then indulge in spicy cheese happiness. 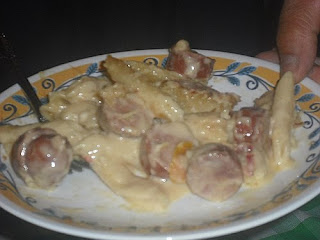 (My nephew sure did) 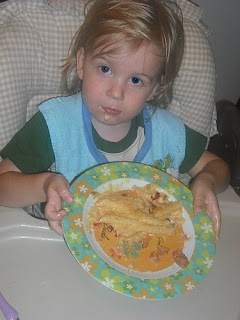 Now if I only had some Crayfish.