I am a little behind.... I just realize I never hit the publish button on this post...

What better way to celebrate the new year, than with a lighter "spirit" and maybe a little luck.  ;)

Champagne or Sparkling wine being the most common spirit to ring in the New Year, I thought that since the temperature was a little on the chilly side, those partaking in said "happy" might do well with a little blood-warming fortification.  Thus came about the Lucky Lady.  A delightful pear and apple laced concoction that is absolutely mouthwatering.

Clavados, a brandy that has been distilled from fermented Apple Cider hailing from Normandy in France, is the normal ingredient, but Clavados is kind of hard to find and when you can find it it's outrageously expensive.  That coupled with the fact that fruit juice based brandies (the ones that aren't just "flavored" brandy) are an education in and of themselves made me take pause.

Seriously, choosing a good Clavados (for there are many) is like trying to decide on a Brandy.  It is aged for at least 2 years but can be aged a lot longer.  The flavor mellows a little with age.  Then there is the combination of apples that were used for the cider.  There are some 200 recognized varieties of apple that can be use for Clavados and some producers use up to 100 different ones in their cider mixture.  Craziness and a lot of research.

So I threw caution to the wind and decided to go with a local version by Clear Creek Distilleries here in Oregon.  It was also a bonus that it came in a pint sized bottle instead of an entire 5th, so I was not making a major investment only to potentially suffer complete disappointment. 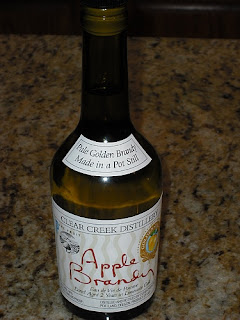 It is pot distilled from all Apple Cider and aged in Limousine oak, as opposed to Apple Jack which is only 35% apple cider and 65% grain based alcohol.  Thus the label on the bottle Eau de Vie de Pomme or Water of Life of Apple.  A much more refined flavor than fruit flavored brandy.  It smells heavenly, like Cream and Apples and, believe it or not, there are pear notes to the fragrance. 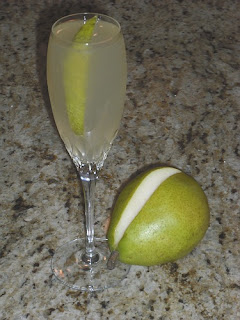 1 pony of Clavados (or other Apple Brandy, but not Apple Jack)
1 pony Pear Juice
Slice of Pear for Garnish
Champagne, Prosecco, or Cava to fill the glass 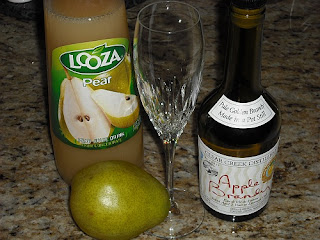 Grab a Champagne Flute and pour in a pony of Apple Brandy. 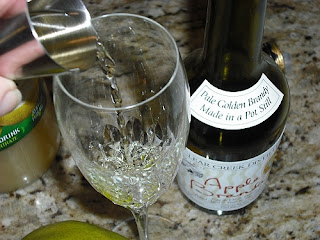 Add a Pony of Pear Juice (although you can add Pear brandy instead for a real kick in the rubber parts)  ;) 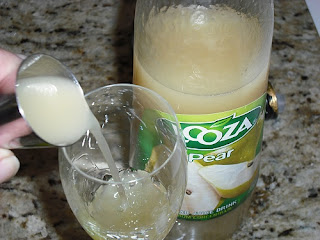 Add a slice of pear. (I chose d'Anjou) 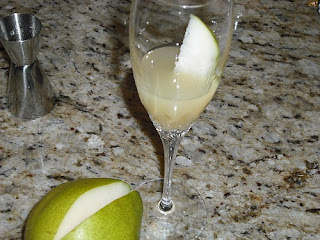 Then simply top it off with the Sparkling wine of your choice. (I recommend an Extra Dry Sparkling Wine) 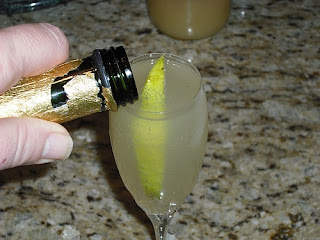 Tip it back and enjoy the luscious apple and pear fragrance. 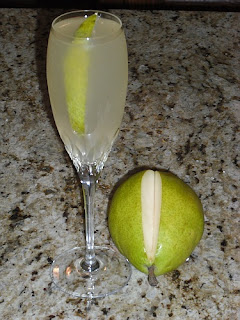 Truly mouthwatering....  And warming.   Brandy does wonders when ones blood is running cold.  :)

I don't know how I missed this post, sound like something I would just love. I love Calvados.