I have said this before in a previous post. But I decided that I should probably go into a few details on WHY browned butter is best, for the attributes of browned butter go beyond mere flavor. But before I do that, I need to go back to the beginning.

In the beginning the cow/sheep/reindeer/goat/yak/water buffalo created milk and it was good.... (I don't think anyone knows which animal was the first "dairy" animal, I assume it was the goat but it could have been the yak)
Then man came along and for some unknown reason decided to drink said milk of unknown beast. And it was delicious, nutritious, and packed with vitamins, protein and fat, making the long hard winter a little less bitter...
At some point along the way, someone noticed that the milk separated if left alone for a couple of hours. A thick layer floated to the top, which was especially good when skimmed off and spooned over berries (OK, I just made that up).
The point is, that the fat in the milk separated, since milk is not naturally homogenized (Fat clusters broken down), that is except for goat milk. But that is another post. The fat globules from the milk fall out of suspension in the water (milk is about 75% water) and float to the top.

So Man begins skimming his milk and making "Cream". Which is all fine and good...

Then, probably by chance, "someone" high in the Alps, had milked their dairy animal, waited the appropriate amount of time, skimmed the cream into a jug, place the jug in their nap sack and went running "helter skelter" down the side of the mountain, jumping trees and boulders. By the time they arrived at their chalet in the valley, there was this strange clumpy stuff in the bottom of their jug. They grabbed a baguette and smeared some of this strange lumpy substance on a slice ----
Boo-YAH!!!!

European culture begins, for THIS was the first Butter.
OK, Now that we finally have butter, let me explain what butter is. If you have ever made a salad dressing or a hollandaise you are familiar with an emulsion. That is, tiny little droplets of oil/fat, suspended in water and an acid. Well, not to confuse the issue, but butter is the opposite... tiny little water droplets (Buttermilk), suspended in fat. True there is also a little protein (Casein) thrown in for good measure along with Lactose sugar and just a smidgen of lecithin (thus the finishing of sauces in French Cuisine). But butter is a water in oil/fat emulsion. Here is another little tidbit, Butter is unique in the fact that is is not JUST a saturated fat... Oh no! It also contains free fatty acids that are liquid at room temperature, this is why butter gets soft when left out on a warm day. Butter is tempered just like chocolate, to form crystals of fat, the temperature of the tempering determines how hard the butter is. If butter were made of ALL saturated fat, it would be like trying to smear candle wax on your toast. That just ain't right!

OK, before expounding on browned butter, I must first explain clarifying butter... which is simply the melting of butter until the water "boils" away and the proteins molecules fall to the bottom or rise to the top as a scum. The top layer is skimmed off and the middle layer is poured off leaving proteins/sugars in the bottom of the saucepan or filtered out by pouring through cheese cloth.
What is the purpose of this? Clarified butter resists rancidity, yes, its the protein and the water that cause butter to go rancid. In warmer climates, such as India, Ghee was made, to prevent their butter from going rancid. Bacteria need water along with sugar and/or proteins to perform their nasty deeds, not fat. The purer the fat, (Saturated fat) the longer the shelf life. This is why vegetable shortening lasts so long at room temp in your cupboard.

OK now that I have explained clarified butter, I want to "kick it up a notch"...

Browned butter is simply clarified butter that has cooked a little longer until the proteins/sugars that have separated out in the bottom of the pan, begin to brown, and impart their "browned" flavor to the fat. This is the same idea as using the fond in the bottom of your pan to create a pan sauce. Picking up all those delicious browned protein bits can enhance any meal.... Especially a steak.
Allow me to demonstrate.

Here we have the butter beginning to melt over LOW heat--This is IMPORTANT; I used almost 1 cup of unsalted butter. (this will make 3/4 cup + 1 TB browned butter) 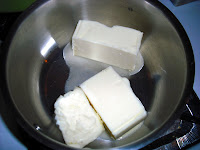 Here the foam (Casein) has begin to form, this should be skimmed off. 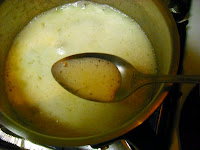 Save it in a bowl, because this is REALLY GOOD over vegetables, especially asparagus. 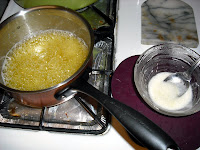 Now you can really see the water boiling off, at 212 degrees the water becomes steam and breaks the emulsion. 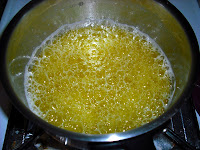 Now the protein/sugar bits have begun to brown, in essence, this is a controlled scorching of butter... Keep the heat LOW or you will actually burn it.

I usually swirl the pan a couple of times, just to get everything mixed up...

After the butter begins to brown, remove from the heat and let it set for 10 minutes, you want to let the browned bits steep in the oil to transfer flavor, but not to get any darker. This is where copper comes in handy for cooking, for the response to temperature change is immediate; If you are using aluminum or aluminum core, remove the butter a little early, unlike copper, aluminum holds heat and is slow to change, even after being removed from the heat (which comes in really handy when serving from stove to table as the pan retains the heat longer) 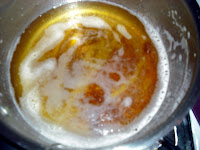 Gather a strainer a pyrex cup and a little bit of cheese cloth, folded over a couple of time. 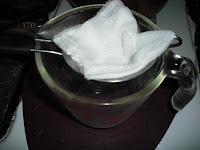 Place the cheese cloth in the strainer and pour the liquid butter through, leaving the browned bits in the pan. 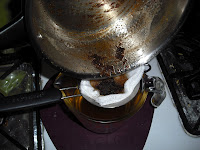 Voila!!!!
Browned Butter; or as the French call it.... Beurre Noisette (Hazelnut Butter) 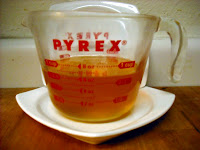 Allow to cool and then pour into your storage container, you can store this at room temperature for a month. 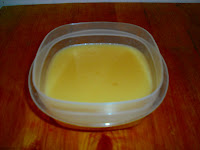 Now I am sure you are asking yourself... "Yeah, but why is it really better than regular butter?"
OK here is the list of the phenomenal attributes of browned butter:

So there ya have it, all the reasons that Browned Butter is superior to whole butter. Yes, Clarified butter is just about as good, but is missing that subtle nutty flavor that Browned Butter is known for. It truly is a treat for the palate. I invite you to try it the next time you sauté some fresh spinach or how about the next time you make mashed potatoes, nothing can compare. This is your ace in the hole when it comes to adding flavor to your next dish. World renown chefs all over the world have been using this little secret for many many moons.

Great info. Ya know, I've never tried this, but I think I should. Thanks!