I have been pretty lucky in life. Grew up in Oregon on a Goat dairy, have traveled to London, have friends who would give me the shirt off their back, I'm owned by a dog, a cat and 5 fish that adore me, (well I can't really tell with the fish, who really knows what a fish is thinking) and about 1 1/2 years ago I found BakeSpace, which is my constant source of culinary inspiration. Yes, very lucky... Even more so, recently, since one of my friends on BakeSpace, Spryte, posted the most awesome chili recipe ever... It's located here at Spytes Place.

I made this chili a couple days ago, and it was delicious, as always.... But since I am a single guy, I have to freeze part of it... As luck would have it, I had friends coming over this evening and I decided it was time to try something that had been batted around the BakeSpace forums a week before. Mini Chili pies. So I got out my Corn biscuit recipe and attempted to make pie crusts in muffin tins... Par baked them then added some chili and finished them off in the oven... It didn't work. I ended up with partially cooked biscuit goo underneath the Chili...

I was mulling over possible resolutions to my soggy biscuit issues, when an email came in notifying me that someone had left a comment on a Chipotle Baked Beans recipe I had posted awhile ago, to let me know that they had liked the dish. Then, while reading the comment, I noticed the photo I had taken... for the solution to my dilemma was before my eyes. I had forgotten about the little cast iron pots that I had buried somewhere behind my microwave on top of the refrigerator!!! Yet more inspiration from BakeSpace.

So after an unsuccessful attempt at mini chili pies, I resolved myself to.... 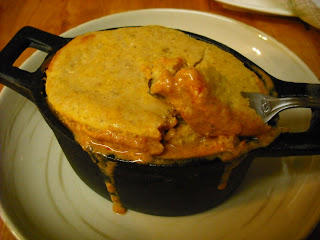 First I modified the Chili, cause I like a little Sour Cream and shredded Cheddar on my chili, thus I had to mix it in ahead of time. So I warmed up 5 cups of Chili to which I added:
1/2 cup of sour cream
1/2 cup of cheddar cheese

Then simply stirred occasionally over low heat until heated through and the cheddar melted.
Then filled my little cast iron pots 3/4 of the way (they hold about 1 cup) 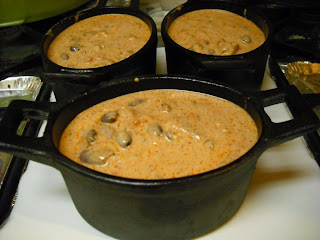 Then I made my Corn Biscuits.... 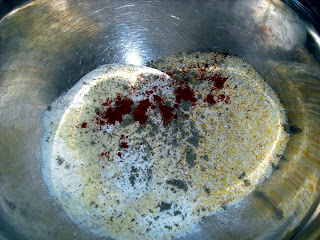 Brown the butter and stir 6 TB into the room temperature Buttermilk.
Using a fork, mix the ingredients together until a soft dough forms. 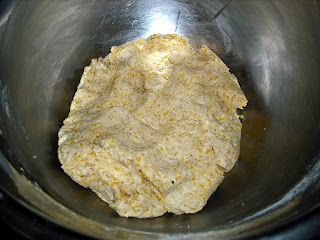 Turn out onto a lightly floured board and roll out to 1/2-inch thickness.
Cut into rounds large enough to fit down into the mini iron pots. (I was lucky, these have lids, so I had a pattern) 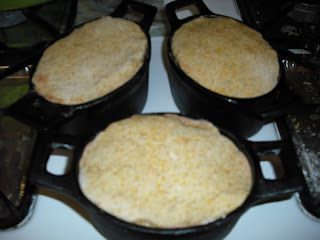 Line a baking sheet with tin foil to make potential cleanup easier.
Place in the oven for 17 minutes or until golden brown. 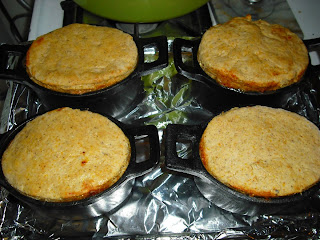 Remove from oven and brush with remaining TB of browned butter.
Place cast iron pot in a bowl and serve

Thanks again Spryte, that Chili is Phenomenal!!!!!

Shane OMG!! We almost ALWAYS serve it with cornbread... you saved a step!! That is so cool!!! (and I stir sour cream & cheese into my bowl every time... hehehe)

That is an awesome idea! I could go for one of those right now. ;)

A recipe combined from those of two of my favorite cooks! Wonderful! I love the pots!!!