Spiderman Episode I - Spidey Gets Baked

It is that time of year again, my Godson's birthday. he will be 6 this weekend. Since his first birthday, it has been my pleasure to make his birthday cake every year. Everything from an Inchworm, to Elephant, to Zoo Train, to the space shuttle last year (My first MMF experience, and it had wheels.) This year he decided on Spiderman. Yes, a person, albeit fictional, but none the less, a human subject for a cake. I am much better at animals and inanimate objects, I will be honest. So I was suffering from extreme lack of inspiration.

I thought about just doing his masked head. Seemed like a good idea until I realized I would be presenting a 6 year old with Spiderman's head on a plater for his birthday. Thats a little disturbing.

Then I thought of making a building and buying an action figure to climb it. That seemed like it might have worked until I realized I was going to have to drive, with said cake, to Aliso Viejo or Redondo Beach. OK, I will be honest, California may have a lot of freeways, but upkeep seems to be incomprehensible to CalTrans. Inevitably, it would end up looking like it went through the San Francisco earthquake by the time I got there.

So I "cheated", I went and bought one of THOSE pans, you know the ones, the little Hello Kitty, or Superman or Dora the Explorer... A pan I will more than likely NEVER use again but will have to store for the rest of my life, because as soon as I DO get rid of it, someone is going to ask if I still have it, because for some strange reason, only known to archangels... they need to make a Spiderman cake. 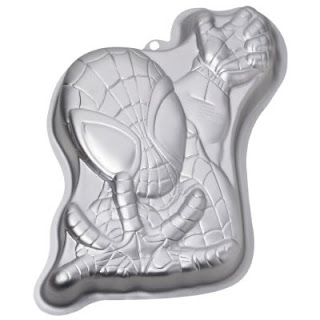 Anyway, I will be presenting Spiderman in 3 parts, cause I loved the movies, and yes.... I AM that geeky.

This is the cake, fresh from the oven (Chocolate) 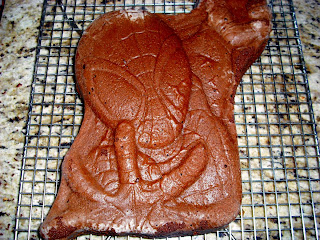 The cake baking was pretty uneventful... I shortening'ed up the pan, cake floured it and baked the cake. It did rise a little too much in the center, but that was easily trimmed away before I unmoulded it and Voila!!!! I only lost a little of the crumb on the fingers, but I kind of suspected that would happen.

OK, I refuse to follow directions. Yes, to some that is no big surprise. According to the convenient instructions printed on the back of the pan liner, I am suppose to use frosting for his eye pieces.... No, Uh uh.
I was going to use gum paste, but I found out, at 9:00 pm, that my paste had turned to stone. So I ran to the store and grabbed some Marzipan, came home, rolled it out to about 1/32 so it would be malleable enough to mold over the eyes. 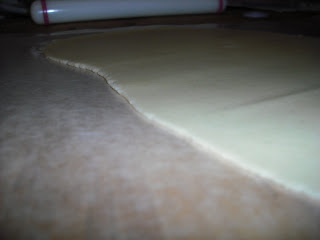 Made a quick pattern of the eyes from the pan, and cut them out with a knife. 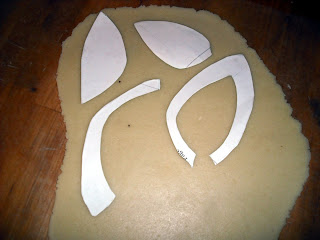 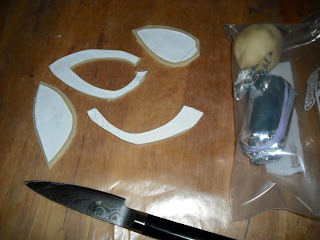 I did 2 pieces per eye, so the center can be covered with silver leaf and the outer rim can be painted black. 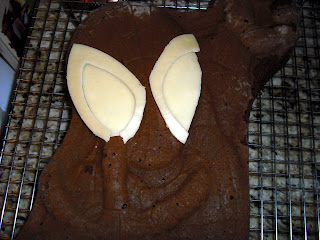 Here the inner pieces are silver leafed. I am waiting for the rims to dry before painting black tomorrow evening. 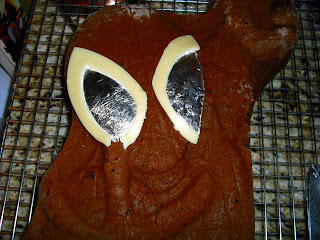 Stay tuned for our next exciting episode...

Spidey Gets Creamed
(ButterCreamed that is)
~~

Haha! I love his "jazz hands". Good plan btw, not serving up spidey's head on a platter. LOL too funny. Can't wait to see the rest!

Are you gonna have some marzipan web action coming out of his front hand?

From the title, I thought we were gonna see Spidey with Michael Phelps! hehehe

I know the feeling! A long time ago i purchased a boobie cake mold and tossed it. My Best Guy friend is getting married and I cant make him a Boobie cake! BLAST! But I made him a marzipan hoo-ha! Tee hee