Yeah, I know, my titles are getting a little lame.


Greek week continues, and I still have Kibbeh coming out of my ears, so it's Kibbeh for dinner again... BUT, I decided I didn't want Avgolemono Sauce tonight... I made up a batch of Tzatziki (say: dza-DZEE-kee) instead. A deliciously refreshing Yogurt dip comprised of yogurt, or course, with cucumber, dill, mint, lemon, garlic and a little green pepper. At least, that is my version, because just like Kibbeh, Spanakopeta and Skorthalia, everyone has a different version, cause it's really all about personal taste.

In the past, I always had an issue with runny Tzatziki. At some point, don't ask me when or where, though it was probably from an Alton Brown episode, it was suggested that I salt the cucumber to draw out some of the extra moisture. Well, it seems to work, so I continue to do it... My theory has become this...
Since salt pull moisture from anything it touches, it, in essence, dehydrates the cucumber over the space of 30 minutes, the quick rinse it receives to remove the salt, happens so fast that the cumber doesn't really have a chance to absorb any moisture, because it is dried immediately with a clean tea towel or paper towels. Once introduced to the yogurt, over the next couple of hours, it pulls in extra moisture from the yogurt, thus thickening it slightly instead of causing it to become runny.

Having a rudimentary knowledge of salts effects on food and the process of osmosis, this seems to make sense. Then again, I could be wrong. It seems to work. That's my story and I am sticking to it... LOLWhether I am actually right or completely off my rocker makes no difference, it is still delicious over Kibbeh, on a Gyro (Which I am making tomorrow) or directly from the bowl with a spoon.Oh, and incidentally, if you can find Greek Style Yogurt, go for that, it's thicker than American yogurt, which also makes for a thicker sauce. If it's not available, you will have to drain your yogurt using a cheese cloth lined strainer set in a bowl and placed in the refrigerator for 8-12 hours, to remove the excess moisture. 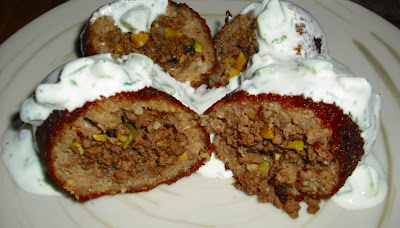 1/2 -3/4 of an English hot house Cucumber; Seeded and chopped (Persian or Mediterranean cucumbers are better)

Peel and Seed the cucumber. 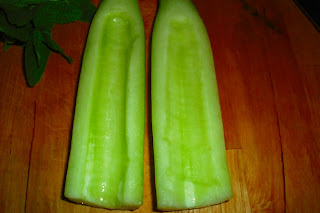 Chop to your desired preference, I personally like little cubes. 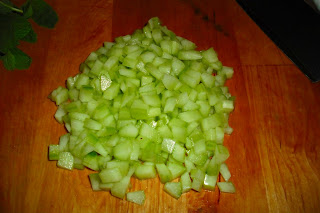 Place cucumber in a colander and toss with salt to draw out come of the moisture. 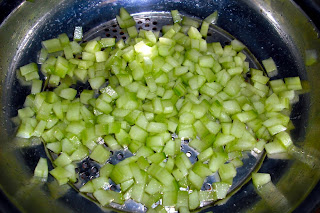 Let sit and drain for 30 minutes. (the below picture was draining water after 3 minute) 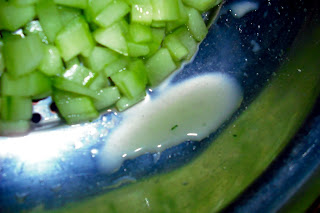 In the meantime, chop your dill, mint and garlic. 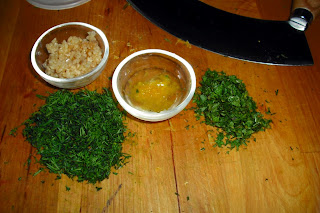 Place Yogurt in a bowl and add the Garlic, Mint, Dill and Lemon Juice (and Zest and Pepper if using) 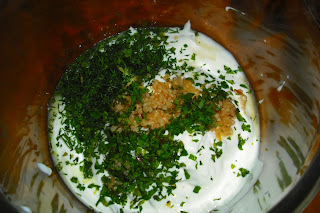 Stir to combine; cover and place in the refrigerator while waiting for the cucumber to finish draining. 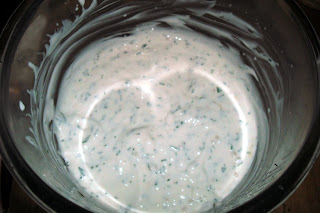 After 30 minutes, quickly rinse with plenty of water and immediately transfer to a clean tea towel or several layers of paper towels to pat dry. (The cucumber will feel slightly wilted) 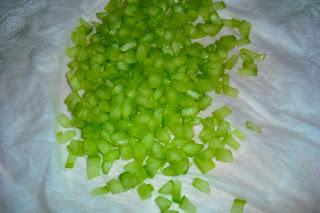 Add the chopped cucumber to the yogurt mixture, 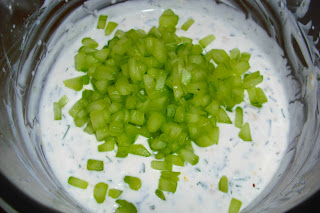 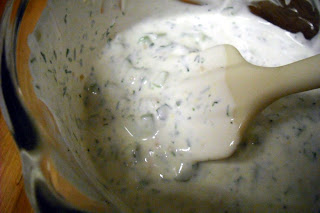 Re-cover and chill for 1 hour before serving.

YUM! I'll have to try adding lemon zest next time!