Woe to the "pancake puff".... (American reinvention, repackaging and mass marketing as it's finest)  OYE!

Let me give ya a little "Danish History" regarding Aebleskiver ('aebleskive' being the singular form). Truth be known, I don't think anyone really knows how or why these Danish treats have taken on a spherical form.  Maybe it's because Danes are such well rounded individuals and it shows in their food.  ;)  har-dee-har-har

Oh there are legends aplenty, especially on the internet, about vikings doing their "triple P" thing, (Plundering, Pillaging and Pilfering) all resulting in several dented shields and/or horned helmets.  After which, since it must have been an early morning raid and the cook just happened to forget the pots and pans, they resorted to cooking pancakes on their dented shields and helmets.  Since the batter naturally ran into the dents, you have the first aebleskiver.  Hmmmmmm.  I find this fairly unlikely, since most Viking era shields were made of wood planks held together with bands of metal.  Wood does not make a good cooking vessel, especially over an open fire. Then again, Vikings didn't have horns on their helmets either.  Those were products of romantic period art, drawing on ancient Greek descriptions of ceremonial dress.  I know, Blah blah blah blah.... LOL

More than likely, since the Nederlands and Denmark are so close in proximity, the Dutch Poffertjes simply made their way north....  Either that, or the Aebleskiver made it's way south.  One or the other.  Though Poffertjes tend to be more ovoid in shape, rather than spherical, the idea is the same.  And just as Proffertjes require a special pan, so to does an Aebleskive.  I am not sure if the Proffertjes pan has a specific name, but an Aebleskiver pan is called a "munk" pan, and is also used to cook Munker (a yeasted batter) as well as Aebleskiver (baking soda and egg white batter).  Which also begs the question, "Which came first, the Munker or the Aebleskiver?" These pans are usually made of cast iron though there are non-stick aluminum versions available at Fantes and there is even an "Electric Skillet" version floating around on the net.

Dubious historical data aside, and probably more information about Vikings than anyone would want to know before breakfast, I just wanted to set the record straight regarding this silly "pancake puff" thing.  It's not a new idea, its been around for centuries... and personally, since I was an idiot and bought one so I could cook 14 at a time instead of only 7, those pans are terrible.  They heat unevenly and casting is so bad it will take eons for them to become properly seasoned. (I gave it to the Goodwill and spent 8 dollars less on a decent one from Fantes)

So what exactly is this Aebleskiver?  Aebleskivers are as sort of hybrid between a doughnut and a pancake with a little bit of waffle DNA thrown in for good measure.  I have heard, and read, that they are traditionally filled with apple slices or jelly.  Personally, I have never had, nor made, them that way but I am intrigued by the idea, however suspicious I may be about sticky goo winding up in the bottom of my Monk pan.  The dents, or holes are about 2 1/4 inches across and about 1 inch deep, giving you a nice "almost" golf ball sized hunk of fried, butter rich, pancake batter that is perfect with a dusting of confectioners' sugar and served along side raspberry preserves, or your favorite cane berry. (though my personal favorites are bilberry, huckleberry or marionberry)

Growing up, these were the presage of Christmas to come, for they were, and are, part of a nutritious Christmas Eve morning's breakfast.  We all knew that once the Aebleskivers hit the table, it was only 24 hours before Christmas morning arrived.  Santa would be coming down the chimney and the stockings would be filled with all sorts of hard to find winter goodies, like tangerines, nuts, various dried fruits and such. (modern day shipping has made these special winter treats more commonplace in cold climates than they were when I was a young pup)

So let's hear it for the Æbleskiver! (pronounced AY-blah-skee-wah)  The herald of Christmas! 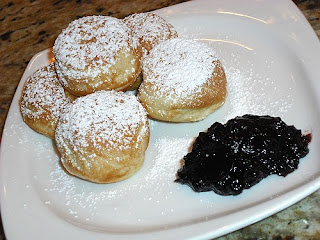 Separate the eggs, whisking the yolks to break them up a little. (I always separate the yolks into a pouring pitcher) 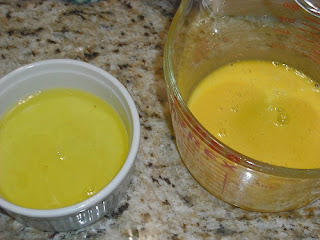 Then add the sugar to the yolks and whisk until pale and thick. 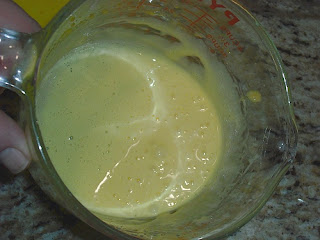 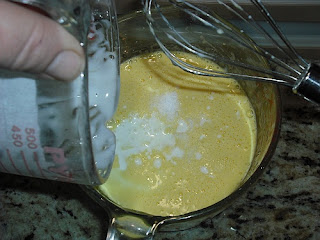 In a separate bowl, mix flour, baking soda, and spices with a whisk. 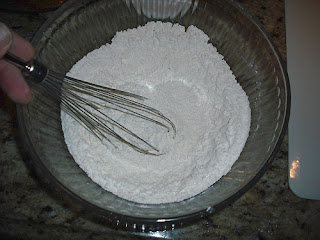 Add flour mixture to the egg yolk mixture and stir until smooth. 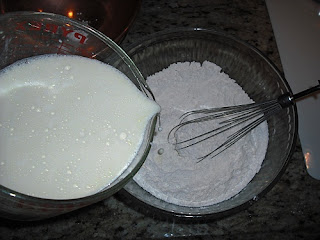 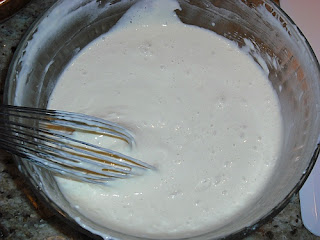 In another clean bowl, beat egg whites with cream of tarter until stiff peaks form. 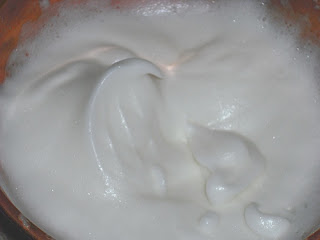 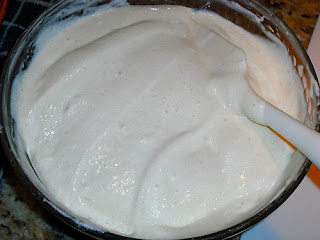 Warm aebleskiver pan on medium heat (You will probably have to adjust heat after the first batch, I always burn the first batch)
Add a small amount of vegetable oil, butter or lard to each one of the seven indentions. 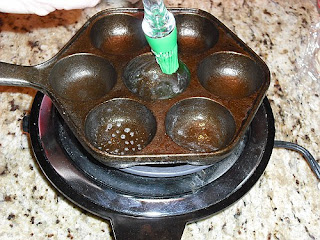 Fill each indention only about 2/3 full. 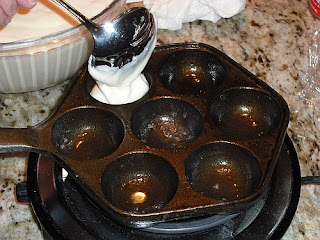 (trust me, they will raise and fill the holes) 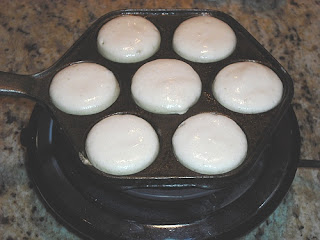 Cook until bubbly on top (3-4 minutes), just like regular pancakes, then, utilizing the traditional knitting needle, a bamboo skewer, or my favorite, a fondue fork, 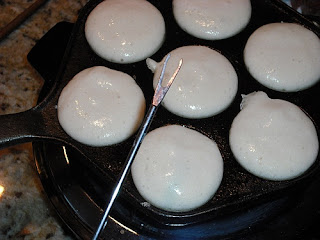 turn the dough balls over to obtain a round shape. (This takes a little practice) 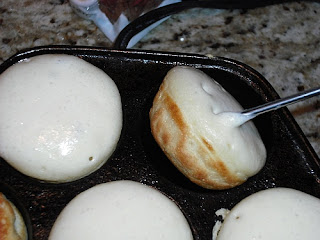 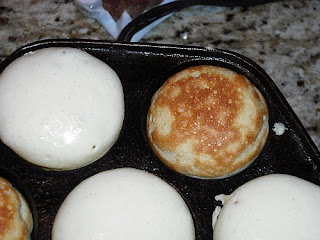 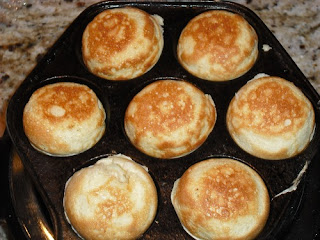 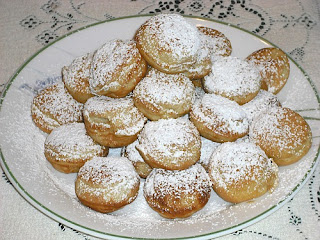 Serve with traditional Raspberry preserves (or Bilberry) and confectioners' sugar. 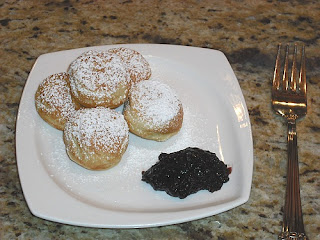 Lingonberry, while Swedish, also goes very nicely as well as Black Current and, as I mentioned, Hucklberry, Marionberry or Bilberry.
They may also be served in American fashion with Maple syrup (I prefer Grade B to Grade A Dark amber)

Happy New Year! I've seen so many great fillings for these pancakes. I don't have a pan but I know someone who does. I may need to borrow it!

Every year when we were sitting down to eat these amazing little puffs of heaven my mom would tell us a story of how they came to be. She would say that the Danes were great warriors (because they were Vikings) and they had this epic battle. It lasted many days and after it was over and they were sitting around too tired to do much. They were hungry but were low on supplies. So someone took a shield that had all these divots from deflecting spears, whipped up a quick batter with the supplies that they had left, and after heating the shield over the fire, made the first aebleskiver. It seem so light and fluffy, but it is a true warriors food :-) At least that is the story I grew up with, even if it isn't what actually happened, I choose to believe my mom :-)