The Key To My Addiction - Key Lime Curd

In case ya haven't noticed at this point. I love citrus curd. And once I made the Meyer Lemon Curd, followed shortly by the Blood Orange Curd. Well, it has now officially become an obsession. So last night, WAY past my bedtime, I was bitten my the Key Lime bug. I had originally bought Key Limes to make a pie. Well, so much for pie, although lemme tell ya. The curd, with a little creme fraiche on a scone, is JUST like eating a Key Lime pie.. :) Awesome!!

Some people may not be familiar with a Key Lime. They really do come from the Florida Keys and they definitely taste different than the normal Persian limes that you purchase from the store to make margaritas and squeeze into your Corona. Oh yes. These teeny tiny little key limes are much less "Bitter" and more acidic. Thus the sugar content is a little higher in this recipe.

I urge you, to try Key Limes if you can find them. They are quite delicious, although a lot of work is necessary to obtain the precious juice, mainly because you have to squeeze SO many to get 2/3 of a cup. (I had to squeeze a grand total of 32 Key Limes, to get the same amount of juice as in 4 Persian Limes.) But it is TRULY worth the effort. For a Key Lime is to a Persian Lime what a Meyer Lemon is to a Eureka Lemon. A cut above...

One thing that I need to own up to. My curd is unnaturally green, and I find it slightly disturbing really. But, I did not want to mix up my curd in the refrigerator. Key lime juice is not green, it's actually about the same color as Lemon juice. So stupid me, I added 1 drop of sky blue food coloring to the mix. I will never do it again! It became GREENER as it was cooking, which is odd because most food color degrades with cooking. I honestly don't know what I was thinking, I never dye my Key Lime pie, so WHY I thought was a good idea to dye my Key Lime curd is beyond me. I chalk it up to the late hour...

So without further babbling, here is my recipe (basically an altered version of the Meyer Lemon one) and only 1 photo, since I have already done this process twice, and it was the wee hours of the morning when I did it. Yes, I know, how sad am I..?? I use to be "out" having a rip roaring good time... Now.. I am at home making Key Lime curd at 2:30 in the morning on a Saturday night, or rather a Sunday Morning. ;) 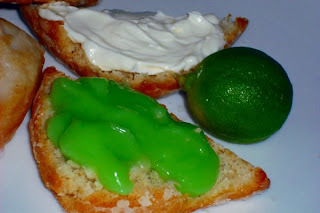 Melt the butter in a bowl over simmering water and set aside to cool slightly.
In a separate bowl place Sugar, Key Lime Zest, Key Lime Juice, Makrut Lime Leaves and Salt. (Those little green strips floating are the sliced Makrut Lime leaves; It kind of gives it a Thai flair) 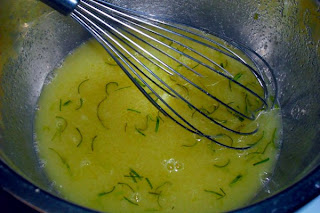 Separate the eggs, placing 2 of the Whites in the bowl with the Sugar and Key Lime juice.
Place the yolks into the bowl of melted butter.
Whisk the ingredients in both bowls until homogeneous,
Then add the Sugar/Lime mixture to the Yolk/Butter mixture and place over simmering water.
Cook, whisking constantly, until the mixture reaches 172 degrees, or until it thick enough to coat the back of a spoon.
Strain through fine mesh into a clean bowl, to stop cooking.
This will also remove the spent zest and overcooked egg specks from the curd leaving it smooth.
Cover on the surface with plastic to prevent any crusting and leave to cool to room temperature before refrigerating.

As with all Citrus Curd, Best when served with Creme Fraiche or Devon Cream on a scone. 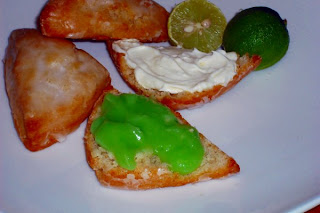 I have a little baby key lime tree. I bought it cuz its a dwarf and it doesn't have those huge thorns. I got one key lime off it. ROFL

Pretty funny about the green! Keep that in mind for halloween (slime anyone?). ;)

I know... Right? 1 little tiny drop and it goes from pale chartreuse to Slime Green... It's like a Nickelodeon Kids Game Show green.... !!! Yikes!

But to be honest... Slime never tasted this good when I was a kid... LOL

Spryte - I am not sure if there is a season or not.