I was channeling my fellow employees chocolate cravings yesterday. Which on one level is kind of annoying, because I have been too busy lately to get involved in a baking project that requires more than tossing ingredients into the Kitchen Aid while it is running. BUT, it is also long overdue, since I am positive that it would reduce my stress level immensely... Or so I was thinking before I started this little project. I did not want to bake cookies, since I had just brought in the Lemon White Chocolate Macadamia cookies earlier this week, and I didn't want to make Brownies again or get involved in a cake with icing and filling and decor. I decided on "quick" chocolate silk tarts.

Notice that "quick" is in quotes...? Yeah, cause they should have been, but the whole thing has turned into a multi-night process now, and I think I would have been better off with the cake.

This is what I get for grabbing a recipe off the net and running with it. Granted, the recipe comes from a cooking mag (I will not say which one, because I am about to go off on them) Some cooking mags really need to have test kitchens, I think, as this is not the first time something along these lines has happened. Let me explain...

The step in the recipe involving the addition of butter made me do a double take. Being all to familiar with Citrus Curd issues, I should have known better. I usually add the butter at the beginning to ensure there are no chunks of unmelted butter, or worse... to keep the Curd from separating or "breaking". Well, since the recipe was from a cookbook, I went ahead and followed it. Yeah, trusting fool that I am.... It separated.... BUT, I had made a mistake myself before hand, when I had added the chocolate, so I chalked it up to my own mistake and no fault of the recipe instructions.

When will I LEARN, I should have followed my initial instincts. My theory is that the water in the butter is causing the chocolate to seize within the custard. But it's only a theory.
Either way, always melt the Butter with the Cream during the scalding phase.
DO NOT add it at the end or you run the risk of a custard break.......

I DID manage to save it, cause I had already wasted enough ingredients the first time. I am sure the texture will be more like dobby silk than, say, dupioni, since I was never able to run it through a sieve to remove any little cooked egg bits. I was too busy trying to get it to rebind after it broke, to do that. A stick blender is your best friend in situations like these... Seriously.... I poured off as much of the "oil" as possible (I am sure there was some cocoa butter mixed with that too) and took the stick blender to it for about 3 minutes trying to get it to rebind.

It seemed to work... Keep your fingers crossed. Tonight I get to make the crusts and fill them. Woo Hoo! I think I am over it at this point, but I am not going to waste all those ingredients. 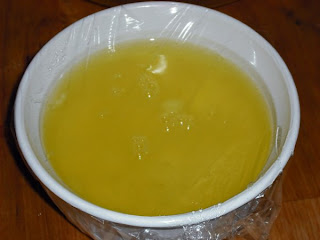 And I STILL have to figure out what to do with 2 dozen egg whites... OYE!! 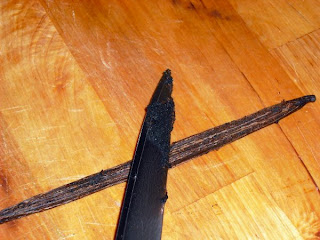 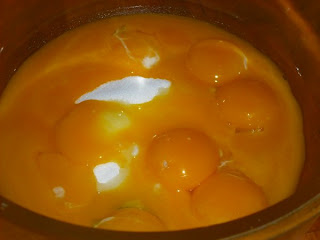 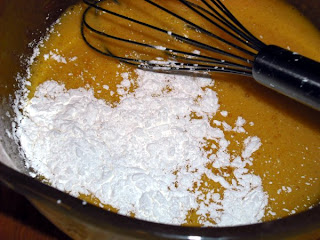 and whisk until completely smooth and velvety, set aside. 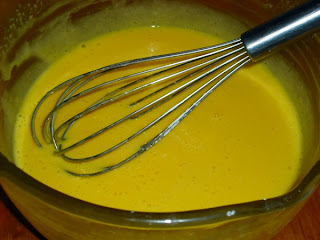 In a small saucepan, combine the Heavy Cream, Vanilla Caviar, Vanilla Pod and 3 Remaining TB of Sugar. (And the Butter) 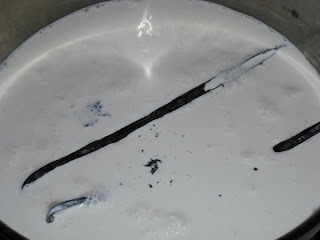 Cook over medium-low heat, stirring regularly, just until it begins to steam, but don’t let it boil.
Remove the Vanilla pod and add the chocolate, whisking continuously until it is all melted. (This is where I messed up the first time, I didn't add the chocolate and skipped to the next step) 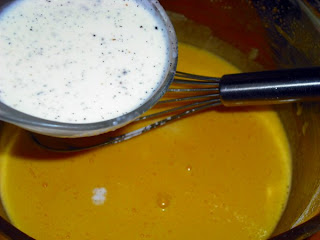 Then, whisking continuously, slowly add the egg mixture to the pan. 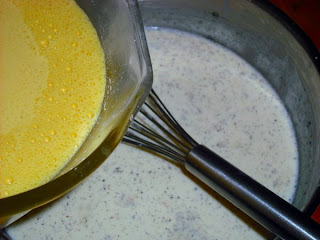 Cook, still whisking, until thickened. (This is where I added the chocolate the first time) 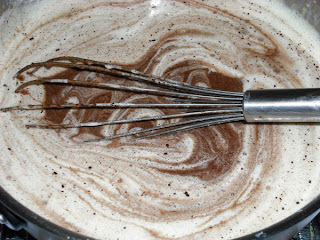 Once it thickens (do not let it boil), remove from heat. 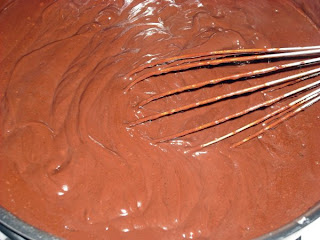 Add the butter and whisk until it is melted. (I didn't take any pics the second time, up until this point) 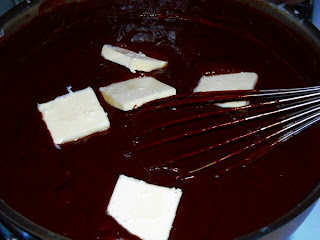 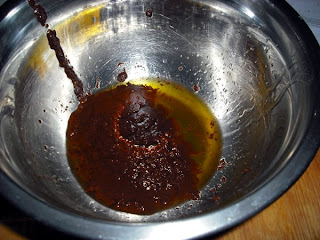 If it does, (sigh) drain off as much of the separated fat as possible...

Grab your stick blender and BEAT it into submission!!! 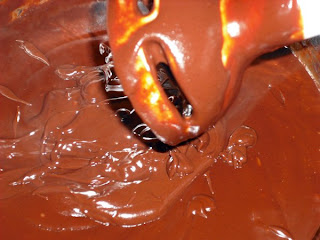 Pour the filling into your prepared shell(s) and place a piece of plastic wrap directly against the surface of the filling, refrigerating for at least 3 hours and up to 48 hours. 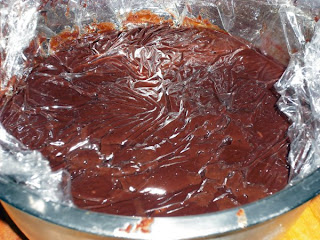 I will be completing this tonight but making a sable tartlet crust.

Dude, that is wicked rough. At least you managed to save it, I probably would have thrown it out. And yelled at the trash can.