There are many things in life that I love... The smell of puppy breath, watching fancy Goldfish swim languidly about their tank, the sound of a hard rain on a barn roof, the feel of spring grass between my toes, watching baby goats play in a field, the chilled scent of mountain air while sipping a good cup of coffee, and the feel of crisp bed sheets. But most of all, I think, I love food. Particularly Mediterranean food. Specifically Italian and Greek. Down to the knitty gritty? Gnocchi.

Gnocchi, to me, is an enigma. It is one of those things that has no middle ground. It's either exquisitely light and fluffy, carrying the accompanying "sauce" with dignity... or its abysmally heavy and chewy, better suited for for playing Bocce. (well, I guess it would be tabletop Bocce, but still...)

I have had A LOT of bad gnocchi, usually from the not so wonderful cryo-packs in the MegaMart. This is why, several months ago, I put a call out on Bakespace to anyone who had a gnocchi recipe. It was at that point, much to my surprise, that I discovered gnocchi is made several different ways. Not only Potato (I thought all gnocchi was potato) but Ricotta, and Sweet Potato (which is related to Morning Glory, not a potato) as well. This really peaked my interest, so I began studying gnocchi a little closer. This in turn led to my discovery that I was already making a type of gnocchi. Strangolapreti is a gnocchi made with stale bread. It can also be made with bread crumbs or pasta dough as well. (although I have not tried these yet)

Suffice it to say that I have made gnocchi a several times now with both Potato and Ricotta along with some Strangolapreti thrown in for good measure. Now that I have become comfortable with the process, I have started experimenting a little. The most recent was Buckwheat gnocchi, based on potato. The one tonight is another variation on the same theme but using Chestnut Flour, otherwise known as Farina di Castagne. 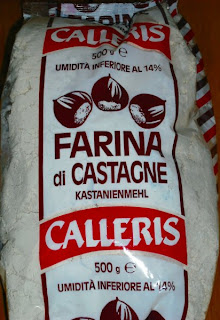 Chestnut flour is roasted chestnuts that have been ground fine enough to be used as a flour, similar to Almond flour. It is gluten-free, just like buckwheat, thus I followed the same proportions I used for the buckwheat gnocchi and simply replaced the buckwheat flour with chestnut flour. There are two crucial differences though. Chestnut flour has a higher moisture content than Buckwheat and is mostly starch with very little in the way of fat. I chose to change out the AP flour for Bread flour, which is higher in gluten. I wanted to make sure I had enough gluten to hold them together since they will have a higher water content. Because of this, however, I had to change the method of dough assembly. Kneading develops gluten, Gluten makes things chewy, which is GREAT for bread, not so great for Gnocchi. Thus the dough must rest a little to allow it to relax or they will be tough. 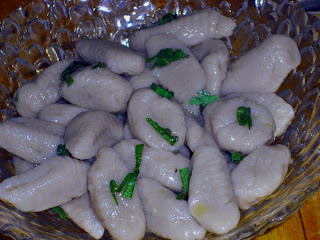 For Tossing:
6 TB Browned Butter (you will need to start with about 7 TB to get 6)
6 Sage whole sage leaves
6 Sage leaves chopped

Bake and Rice your potatoes.
Add the egg and and salt, stirring with a fork to combine. 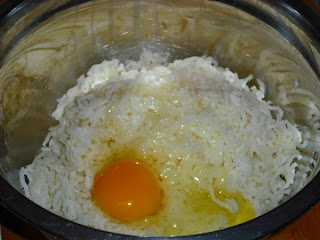 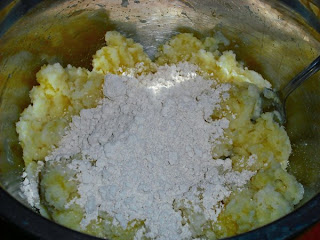 and mix with the fork again. 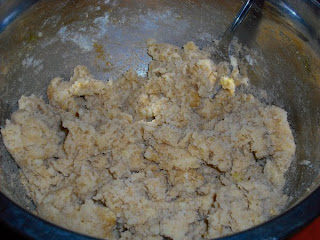 Add 3/4 cup of the Bread flour, then mix with your hands to form a soft dough. 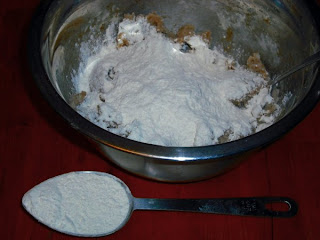 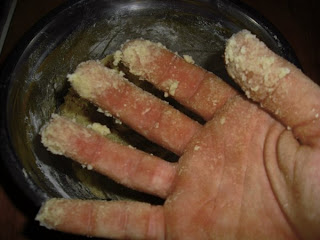 Slowly add the remaining 1/4 of a cup (I use 1 TB increments) until you reach a smooth but still slightly sticky dough (I still had 1 TB of flour left over)
It's OK if you don't use all the Bread flour, the less flour the lighter the gnocchi. 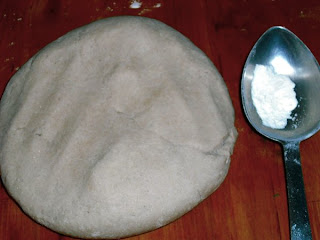 Form into a ball and divide into 4 pieces. 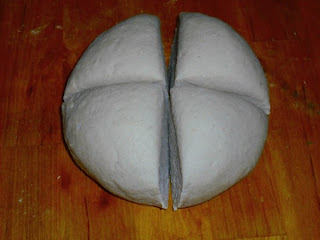 Wrap each in plastic and let rest for 30 minutes. 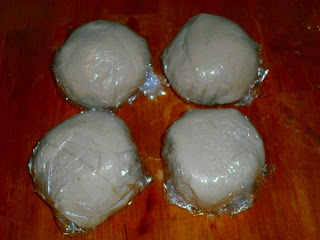 Lightly flour your board with AP flour and roll your 3/4 inch diameter "snakes", then cut into 1/2-3/4 inch pieces; 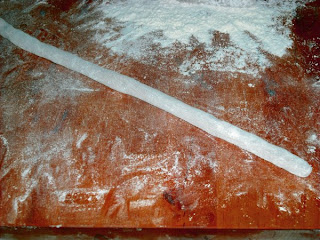 Passing each piece down a gnocchi board, across fork tines or do the "press and flick" whichever your most comfortable with.
Place them all on a lightly floured baking sheet and refrigerate while heating the water. 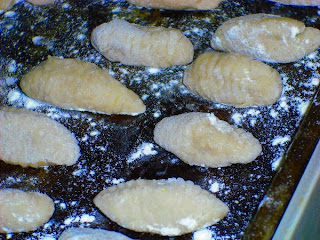 Heat water to a boil, salt it and drop the gnocchi, removing them with a skimmer when they float.
Place in a bowl over simmering water to heat it up. 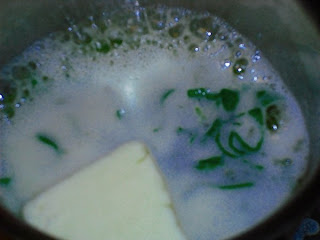 Strain through a fine sieve or cheese cloth. (yeah I know my counter is a floury mess) 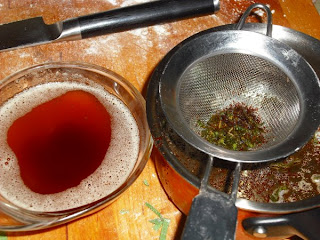 Season with salt and cracked black pepper.
Pour over gnocchi, add chopped Sage and toss. (I don't know what the heck is wrong with this pic, everything is so red) 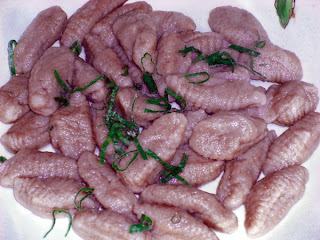 Serve with Parmigiano-Reggiano if you like (I went naked this time, to ensure that the chestnut flavor was there)

P.S. Make ALL the gnocchi, using up all the dough... Even if you are not going to cook them all.  They can be frozen on the baking sheet and then placed in a bag to be consumed later.  Raw gnocchi dough does not keep well in the refrigerator for any length of time.
~~
Posted by Shane T. Wingerd at Wednesday, May 13, 2009

Now, after Papalina and Alfredo, to complete this round of typical Roman pasta dishes and gnocchi, you need to make Gnocchi alla Romana. What do you say?

That's the one thats kind of like Polenta, but with semolina, right? Cooked until it pulls away from the pan like a Choux Paste...? Yeah, I can do that... :) More Parmegiano-Reggiano cheese for me... Woo Hoo!

Yes, that's the one. I think they are my favourite kind of gnocchi.

you can check the recipe here: