This is based on 2 of my favorite pasta dishes Linguine alla Papalina and Spaghetti alla Carbonara which are both made with egg/cheese sauces that are built on the pasta during tossing. So, I began with the sauce and worked from there. A little Cracked Black Pepper and Pecorino Romano from the Carbonara with Speck (Smoked Prosciutto) and Shallot from the Papalina. The addition of Arugula is more of a guilt thing, just to make sure I have a green vegetable in my dish, Italian Parsley would work just as well. But Arugula does have a slight pepperiness to it that works well with the black pepper as well as the smoky flavor of the Speck. I decided on Strozzapreti pasta because I figured the shape would hold more sauce than the longer pastas. After all, the ultimate purpose of pasta is to get flavorful sauces into your face... ;)

It appears that Strozzapreti is sometimes called Stranglopreti, but I tend to think of Stranglopreti as being a gnocchi made with bread and the Strozzapreti as being the pasta. Both words mean “priest strangler or priest choker”, however, I think Strangolare means “garroted, type of strangling” versus Strozzare which means “physically throttled type of strangling”. In the long run, I guess it really doesn't matter either way, but whether you’re a priest or not, please eat slowly and carefully, I would not want to be liable for any food consumption related accidents… LOL 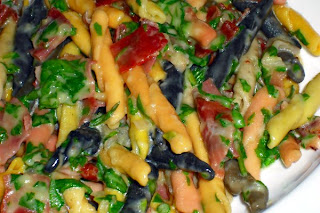 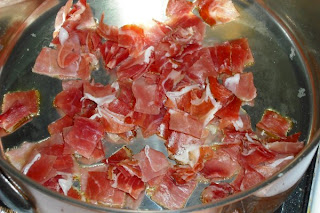 Remove the Speck to drain, add the shallots and cook for 1 minute, then deglaze the saucepan with Pinot Grigio and reduce by half. 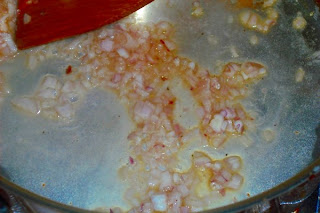 Add Chicken stock and heat to a simmer. 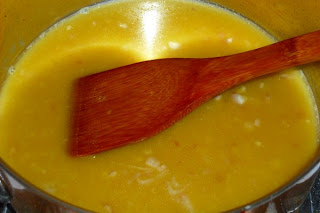 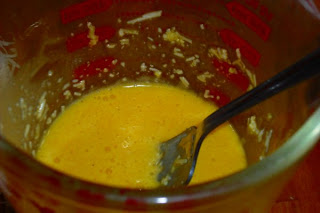 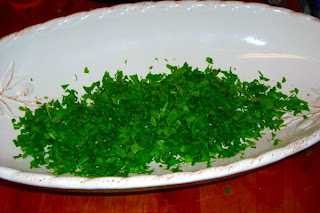 Drain the Pasta and to the bowl 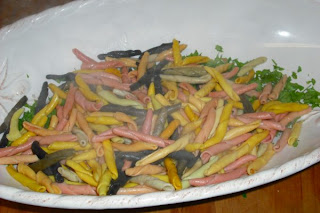 Then add the Speck 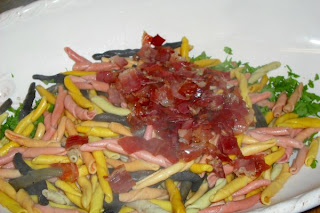 And the simmering stock. 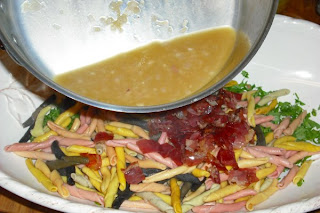 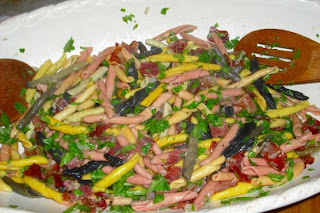 Pour the egg mixture over the pasta 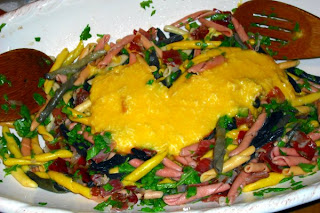 and toss until sauce becomes creamy. 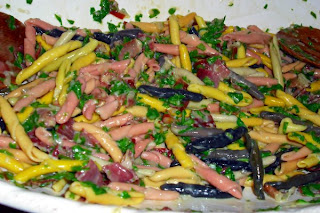 Divide between four warm bowls and sprinkle with chopped Pecorino Romano if desired.
Serve immediately.
Posted by Shane T. Wingerd at Tuesday, May 05, 2009

I love your multicoloured strozzapreti.
May I make just one suggestion? - since strozzapreti are egg pasta, I'd use cream instead of eggs for sauce - my personal preferance.
I've read sth about history of strozzapreti (originaly from Emilia Romagna region - like most other egg pasta)- since people here were not very fond of priests, they asked their wives to prepare this scrumptuous pasta for them, wishing them to choke while eating it.

I will try the cream the next time... I still have another 3 oz of Speck and 1/2 lb of Strozzapreti.. Thank you for the tip on the egg pastas... I am so use to using extruded pastas that I had not considered the egg in the dough.

You make me doubt that I am indeed Italian. I've never heard of this dish before! It certainly looks delicious!

Ooooo, that looks goooood. Never heard of it before, but I'd love to try some.

The pasta is a little hard to find, and I have doubts as to whether mine was really Strozzapreti, cause it was just labeled "Garden Pasta"

As far as the name of the dish, I just made it up. But my Italian isn't that great. It's suppose to translate as "Smoky Priest Chokers in Egg Sauce" LOL