For those not familiar with the Paul Bunyan myths, he was a ubber garmongous logger dude with a big blue ox named Babe, for a side kick. The point, for the purposes of this post, is that he always ate buckwheat flapjacks for breakfast...

This is my French spin on a logger's breakfast. It's actually my favorite thing to do with buckwheat crêpes. Cause I get to play with fire. Allow me a maniacal laugh.

Lemme tell ya, Paul Bunyan never had it this good! I have never tested it myself, but this may even be a good hangover cure. You know, the "hair of the dog that bit ya". Although in this case, it may be the hair of the ox. 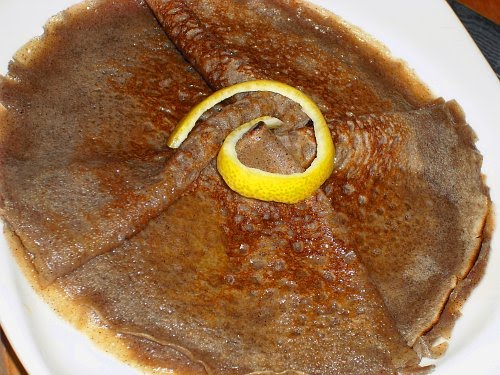 In a large skillet, heat Maple syrup, pinch of Salt, Water and Dark Rum until warm. 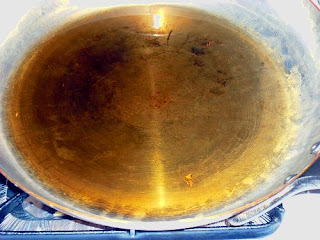 Meanwhile, in another skillet, heat crêpe 1 by 1, just until heated through. 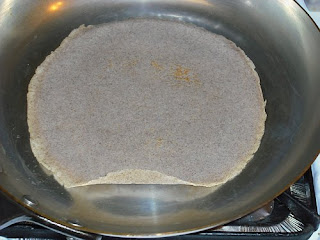 Fold into a triangle and arrange carefully in the warm syrup, making sure to dip both sides in the syrup. 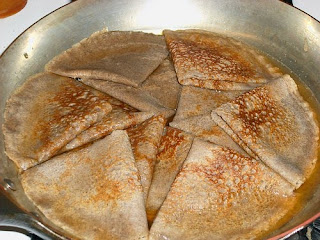 Once all the crepes have been added to the syrup, increase the flame and bring the sauce to a gentle simmer for 2 -3 minutes.
Add 151 and as soon as the sauce comes back to a simmer. 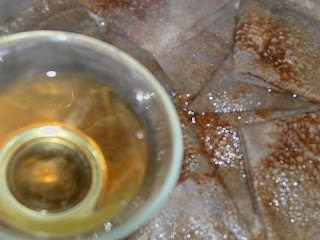 Turn off the lights and ignite!!!! 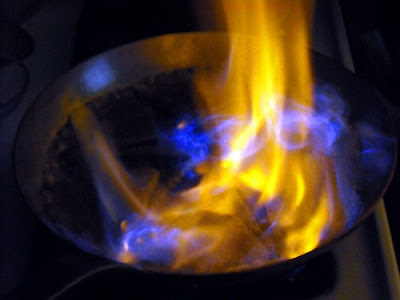 It takes about 20 seconds for the flames to die down... OK, Turn the lights back on, the show's over.

Serve about 3-4 crêpes per person, drizzled with a little of the sauce and garnish simply with Lemon Peel or add some broken pecans or walnuts if you wish.

Nice capture on the flames there dude! I hear Tim Allen grunts in my head LOL

Thanks DD!!! LOL @ the Tim Allen grunts.. :) I am still trying to secure ingredients for the ITT, but I could not help myself and HAD to play with fire... ;)

That is an awesome flame shot. Not only is it undeniably kickass that you set them on fire, they sound like they tasted great too. Heh.

Wow, what an impressive recipe. "Fire works" and all!

Wow....those look amazing! You appear to like fire entirely too much. lol

as long as you still have eyebrows, then its all good LOL. looks totally awesome.