So delicious, so versatile, so humble and yet ostentatious at times. They can be served plain or filled with enumerable sweet or savory delights. They can then be rolled or folded or simply layered with filling in between as in the Mille crêpe. Served as is, or baked in the oven after filling and smothered in rich sauces or soaked in alcohol and ignited in a blaze of glory like Crêpe Suzette.

So this post is about crêpes. Not necessarily what to DO with the crêpes once they are made; but about the crêpes themselves; as building blocks to other great dishes. Kind of like homemade pasta, in a way. So I am going to lay out a foundation that I can build on it later.

I have been seriously loving my Magic Bullet, which I thought I would never actually use, as it has come in handy the last few days. It came with these silly (yeah, not so silly now) "blended drink" glasses/mugs with the handles and the rings to cover the threads on the rim. But this gave me the ability to mix up multiple batches and store them in the containers. OK, I will admit it, they are pretty cool after all, but I am still not going to serve someone a Margarita, Daiquiri or Piña Colada in one...

Combine all liquid ingredients in a blender with salt and blend thoroughly. 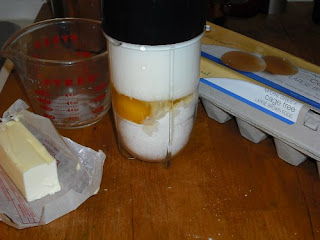 Add flour, then blend for 1 minute until smooth. 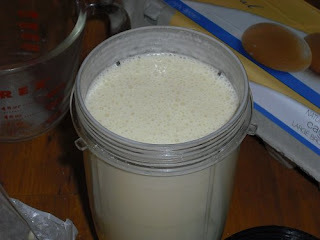 Place batter in a bowl, cover with plastic wrap and chill for 1 hour. 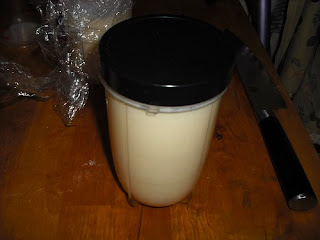 These are made pretty much the same way, simply add the sugar with the rest of the liquid ingredients in a blender; 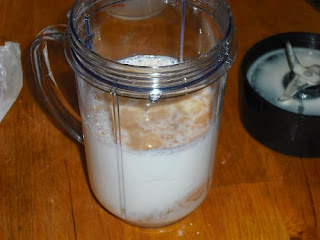 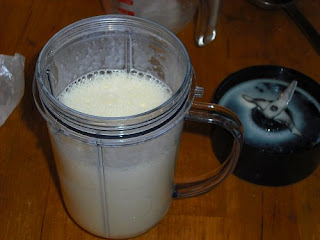 Add flour and blend for 1 minute until smooth. 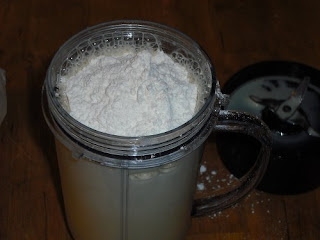 Place batter in a bowl, cover with plastic wrap and chill for 1 hour just like savory crêpes.

Why the chilling? This will not only relax the gluten and make for a more tender crêpe, but it will alow time for the bubbles that were created during blending to dissipated, so your crêpes will be stronger after cooking. If you have air bubbles in your cooked crêpes they will tear easier. 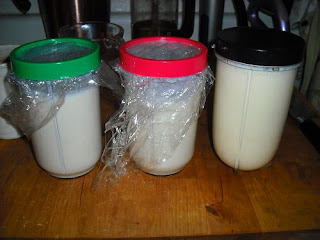 I do not have one of those fancy hot plate things with the wooden trowel used in crêperies nor do I use a Teflon coated pan. I use a 7 inch Carbon Steel crêpe pan (poêle à crêpes), that needs to be seasoned just like cast iron would. It was my first kitchen hardware purchase beyond my original 4 piece cookware set. I picked it up in Portland some 12 years ago, when I had gone back to visit my family, at a store called Kitchen Kaboodle... That was LONG before I discovered Great News down here in Pacific Beach, about 6 years ago...

Heat a skillet or crêpe pan and brush lightly with oil or cooking spray. (you will have to do this again after each crêpe) 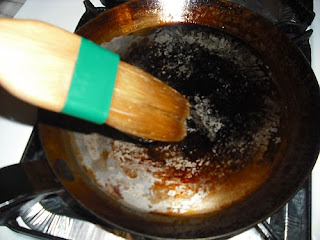 Pour ~ 3 TB of batter into the heated pan while tilting to spread the batter over the bottom of the pan. 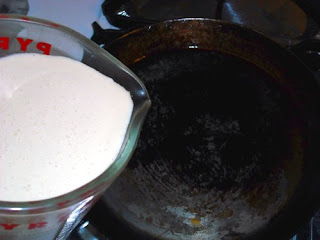 (OK, I am pretty good at 1 handed pictures, but this would have required 3 hands... LOL) 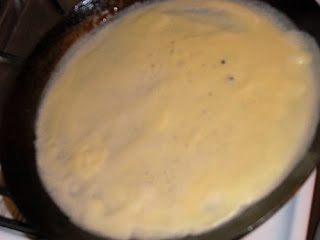 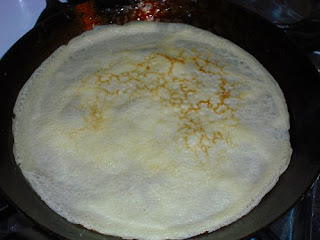 And just so ya know... I always loose the first one. Sometimes the second one as well. Whether the temperature is too high or it decides to stick, like it did this time... I have come to think of the first one as being a sacrifice to the Crêpe Goddess. ;) 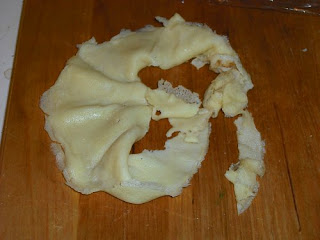 Turn out onto paper towel & cool. 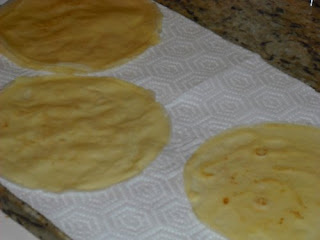 Once cooled, they can be stacked, wrapped in plastic and stored for up to a week in the refrigerator or frozen for 2 months. (although personally, I think they have a strange texture after being thawed out) 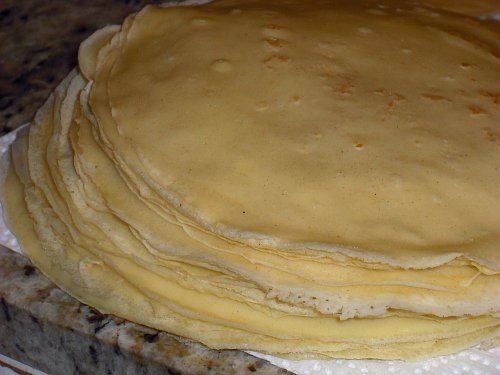 So what am I doing with all these crêpes? Um, you are going to have to stay tuned... I have several plans in motion right now. This is why the 1 1/2 batches of Savory and 1 batch of Sweet crêpes. It all started with the Hell's Kitchen episode dealing with crêpes, I suddenly had a craving for something I have not made since April 2008 BB (Before Blogging). It actually involves another great French invention... I will give you a hint... Supposedly, "Real Men" don't eat it.... :)

Awesome, I love crepes. My dad used to make them once a month, on Sundays.

haha...I have an idea what "real men" don't eat....didn't Spryte mention something about that a while ago?
I'm so glad you posted this...it will all be very helpful with our up coming ITT...wooo hooo

And now the million dollar question (you knew I just had to pop in, right? ;) ): what do you call savoury crêpes, the traditional ones with the buckwheat?

Bob - How cool, a most excellent breakfast treat.

Danielle - shhhh Don't tell anybody... I am typing up the post and editing photos as I type this... ;)

Aline - LOL Crêpes Salées or Galettes de Sarrasin :D I had toyed with making a 1/2 batch of those instead of just more Wheat crepes, but I was out of Buckwheat flour.. :(